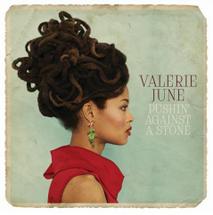 About a half hour in to Sunday night’s 2013 Academy of Country Music Awards presentation, Eric Church took the stage to perform an acoustic version of his latest single “Like Jesus Does.” Church, who is usually known for his baseball cap, aviator sunglasses, and rowdy country gone rock sound, kept it simple this time, accompanied only by his guitar and one harmony singer–a breathtaking female in a red dress, adorned with a crown of dreadlocks. As much as Eric Church’s performance caught the ACM crowd and Eric’s fans by surprise, so did this virtually unknown singer accompanying him. Immediately country fans took to Twitter and Facebook to try and discover the identity of this mystery girl in the red dress.

Eric Church’s duet partner was none other than Memphis, Tennessee native Valerie June. A self-proclaimed proprietor of “organic moonshine roots music,” she is an authentic of a roots singer as you will find. Born in Jackson, Tennessee and raised around Gospel music, her father was a music promoter who worked with gospel musicians and even Prince. When she was 19, Valerie moved to Memphis and began collaborating with a band called the Broken String Collective. 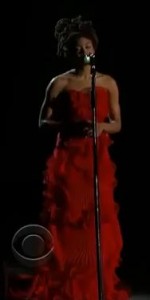 With her absolutely unparalleled vocal command and a woody, authentic tone, Valerie June eventually caught the ear of Old Crow Medicine Show, and in 2009 released an EP with the band called Valerie June & The Tennessee Express. Then in July of 2011, she recorded a yet-to-be-released album Pushing Against a Stone that was co-produced by Dan Auerbach of The Black Keys. The album is slated to be release in the UK on Sunday Best Recordings on May 6th, and in the US in August. As Valerie June told the UK’s Female First, “I feel I’ve spent my life pushing against a stone. And the jobs I’ve had have been fitting for getting a true feel for how the traditional artists I loved came home after a hard day to sit on the porch a play tunes until bedtime.”

Similar to Valerie’s unannounced, and unexpected appearance on the ACM Awards, almost like an apparition she has appeared and performed in many places and collaborated with many names, earning instant respect from the power of her voice and her authentic style. She performed at the 2012 Muddy Roots Festival where she notoriously hushed a rowdy crowd. Saving Country Music saw her perform just 3 weeks ago as part of The Revival Tour’s South by Southwest Showcase.

Valerie June didn’t announce her performance on the ACM’s. Her name was not mentioned in the credits or by the announcers. But like she always does, she left an indelible, unforgettable impact on the hearts and ears of the ACM attendees and viewers.

To say Valerie June is an artist to watch is a gross understatement. The ACM Awards may have been the first opportunity for many people to catch a glimpse of Valerie June, but it won’t be the last they will hear from this singular songstress.