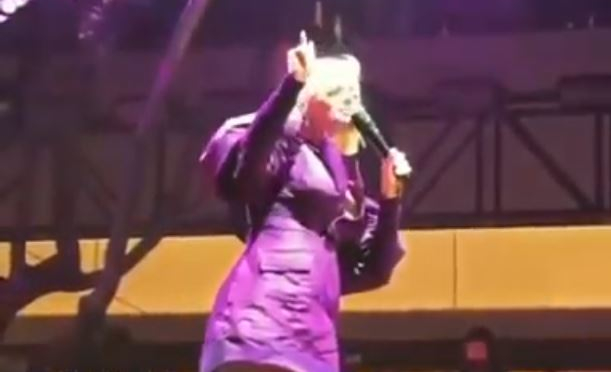 Pop star turned country music carpetbagger Bebe Rexha made headlines last Thursday evening (2-7) during a Spotify party held in Los Angeles to honor all of the women up for the Grammy’s New Artist of the Year award. Bebe Rexha decided to perform her crossover hit “Meant To Be” for the assembled crowd, and when attendees were unimpressed by Bebe Rexha and “Meant To Be,” she stopped down the song and went on an expletive-fueled tirade according to numerous reports from the AP, Rolling Stone, and others.

Since the Spotify party was exclusive and untelevised, you had to rely on the first hand accounts from the reporters in the room to determine what exactly happened. “This song was No. 1 for 50 fucking weeks! I work too fucking hard for this fucking bullshit, okay?” Rexha was quoted as saying. “I worked too hard for this moment. I’m from Staten Island, New York, and I’m standing on this stage right here. You’re going to sing the fucking words if you know the fucking song … Call me whatever the fuck you want to call me. I’m being a bitch right now, yes.”

Well after some deep digging, Saving Country Music was able to find some partial video of the incident from a Portuguese YouTube user. The video corroborates both the quotes coming out of the event, and the surly attitude Bebe Rexha displayed from the stage.

Bebe Rexha’s “Meant To Be” collaboration with Florida Georgia Line spent a historic and likely insurmountable 50 weeks atop Billboard Hot Country Songs chart in 2017-2018. It also broke records for the best-charting debut single by a woman in country along with other important benchmarks. Many fairly question why “Meant To Be” was considered a country song, when it was not recorded to be one, and was not originally considered on country music’s charts until it was sent to country radio. Bebe Rexha has no ties to country music. She didn’t even know who Florida Georgia Line was before the collaboration. There are also fair concerns about the playlist manipulations that put “Meant To Be” at #1.

“Meant To Be” was up for Best Country Duo/Group Performance at the 2019 Grammy Awards, but lost to Dan + Shay’s “Tequila.” Bebe Rexha was also up for New Artist of the Year. She lost to Dua Lipa.

The Spotify crowd, and the Grammy Awards deserve an apology.