Video Review – Taylor Swift’s “I Knew You Were Trouble” 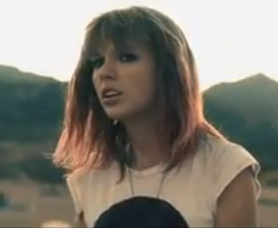 Yes, yes we all know nothing about this is country, so let’s not waste any time rehashing old arguments. What intrigued me about this video is its boldness and its breadth, and how it perfectly illustrates the greater Taylor Swift paradox.

The video for “I Knew You Were Trouble” is heavy in concept, story, and mood. It starts off with Taylor waking up in a dystopia landscape in the form of the leavings of a drug-infused rave. Quickly characters are introduced that are completely counter-intuitive to the prim and proper Taylor Swift persona we are all familiar with, while Taylor herself is dirtified in a hipster punk getup with disheveled, pink-tipped hair, dark eyes, and her subtle overbite captivating the eye like Jennifer Grey’s pre plastic surgery sniffer.

Bar fights, cheap hotel rooms, Misfits T-shirts, bad tattoos, and the general trappings of a downtrodden, transient life create a backdrop for a tragic story that our sweet Taylor gets so unfortunately wrapped up in. The vision of the “I Knew You Were Trouble” video is beyond ambitious, and through the intelligent and creative use of light, setting, character, and costuming, they accomplish the most craved effect for a 5 to 6-minute piece of film: transporting you to a different place.

The “love as drug” storyline is enthralling, and the moral about losing who you are is both stimulating and well executed, helped along by Taylor’s reflective and contrite dialogue bookending what should really be characterized as a cinematic short as opposed to a simple music video.

Are you feeling the mother of all “but’s” coming on? Because that’s what hits you at the 2:03 mark when the actual “I Knew You Were Trouble” song gets piped into this post-Apocalyptic panoram. The effect is the utter destruction of any fantasy or mood this video conveys. The ultra-sacchrine, clean, ska-esque power pop opening guitar riffs, followed by the hip-hop cadence of Taylor’s bubble-gum dance club lyrics are like pouring a gallon of white paint on a Rembrandt, or serving caviar on a Cheeto.

Taylor Swift, the sweet little curly-haired girl that wrote all her own songs about romance is who America fell in love with. If she wants to become a dance club diva, she will quickly become a small fish in a big sea. Sure, the short term success will be (and has been) grand, but it will be at the expense of the long term acceptance as a substantive artist that Taylor Swift covets.

The video for “I Knew You Were Trouble” is about losing yourself, and ironically, that is exactly what Taylor Swift does with this song. Co-written by the pop hitmaking duo of Max Martin and Shellback, the dubstep-inspired tune is Taylor Swift uncharacteristically losing sight of what made her America’s greatest pop star: being herself.

Taylor has built her persona around being the anti-party girl. By putting out a party song, she’s off message, and out of her element. The song says, “I knew you were trouble when you walked in,” alluding to the antagonist entering somewhere, like a club where you would hear the type of digitally-manufactured dance music that “I Knew You Were Trouble” is synonymous with.

But in the video, Swift encounters the antagonist in an open space, and hangs out with him at a concert with a real band playing real instruments. She is also seen hanging out with him in a run-down diner, and bedding down with him in a dirty room. None of this creates contrast, it creates compromising confusion of mood and setting, in both this video and in the Taylor Swift cult of personality. I understand Taylor Swift is playing a character in the video, not being herself. But when it comes to the song, this is being presented as all Taylor.

No doubt in Taylor Swift’s brain, signing on with Max Martin and Shellback to do a gaggle of songs for her latest album was a stroke of brilliance. She has called them “heroes.” But just like the overall experience with Taylor’s album Red, the Martin/Shellback influence comes at you as completely out-of-step with what is otherwise a pop record filled with a curious amount of depth. We all make mistakes. The alarming part is that in this case, the mistakes are being rewarded with commercial successes and tremendous attention, possibly taking these songs from a trial balloon, to a pattern of behavior to stretch into the foreseeable future.

The most critically-acclaimed song in Taylor Swift’s career happens to also be her most country song ever, that being the double Grammy-winning “Mean” inspired by her critics. Taylor Swift says now that she no longer reads her criticism. She doesn’t want to be part of that negative experience, yet her personal life seems to be a torrid foray into high-profile flings, with the payoff being the inspiration for songs such as “I Knew You Were Trouble.” Now that Taylor is sequestered from the critical world, all she has is Mediabase numbers and YouTube plays to determine the success of her work.

You can’t have wild, short-term dance club success and keep your reputation as an artist of substance at the same time. Taylor Swift must choose. And with “I Knew You Were Trouble”, Taylor chooses poorly. Her “trouble” is not an antagonist cast in the role of a video, or a previous lover who jilted her. It is the denizens of the pop industry who would sell her long-term substance for their short-term success.

There is no morning after pill for that poor decision.

1 gun up for a brilliant video concept.

1 gun down for an awful song.