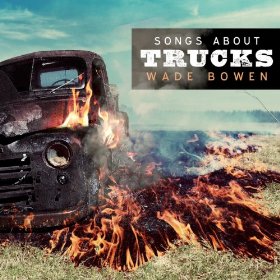 “Songs About Trucks” performed by Wade Bowen and written by hot songwriting commodities Brandy Clark and Shane McAnally has become one of 2013’s big anti-hits with its off message take on truck songs and their daisy chains of clichÃ©s. Usually accompanying these odes to idiocracy are modern country music videos complete with hot rods, hot girls, and jacked up trucks burning brodies in churned up mud, hurdling themselves headlong toward the cause of finding a new frontier for image-driven misogynistic consumerism and sheer indolency. So it is only appropriate that Bowen’s anti-hit should be accompanied by an anti-video.

Shot and produced by James Weems and Glen Rose, the “Songs About Trucks” video co-stars filmmaker Blake Judd of JuddFilms as an overzealous Nashville videographer looking to turn a timid Wade Bowen into an oversexed country star, fitting him with designer duds, dapping makeup on his face as he squints and pouts, while bikini-clad coeds cool down in the water getting ready for their juggy cameos. Eventually Bowen slunks off the set to sit in a bar with a lone cameraman, telling his story in a simple manner.

Just as some have pointed out that songwriter Shane McAnally has had a hand in some of the recent “bro country” songs that “Songs About Trucks” looks to lampoon, filmmaker Blake Judd also has been behind the camera for some “titties and tailgates” shoots, including the Bucky Covington / Shooter Jennings collaboration “Drinking Side of Country” and the Jawga Boyz / Joe Diffie mashup “Girl Ridin’ Shotgun.” It may have been cool if the “Songs About Trucks” video took the sensationalism to the next level, with legions of buxom chicks dancing and an army of mud-caked trucks, but Bowen probably doesn’t have the budget the big boys do. Nonetheless, this video does a good job illustrating what is at the heart of the message of “Songs About Trucks” and Wade Bowen as an artist, which is an honest portrayal of a man who just wants to be seen as one of us, instead of an entertainer on a pedestal.