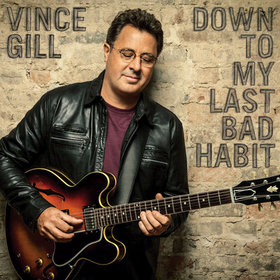 The long wait for a new Vince Gill solo record is about to be over. Announced Thursday morning (11-19), Vince Gill will release his twentieth official album over his 30-plus year career, and last solo album since 2011. Down To My Last Bad Habit will arrive in stores on on February 12th, and ahead of the new record, Vince has released a new single called “Take Me Down” (listen below).

Vince Gill is a Country Music Hall of Famer, owner of 20 Grammy Awards, 18 CMA’s including 2 Entertainer of the Year distinctions, and has sold more than 26 million albums. Gill has also charted over 40 singles, but recently has taken some time off from the grind to re-connect with his roots, including regularly playing with the Nashville-based supergroup The Time Jumpers, and releasing the album Bakersfield with steel guitar player Paul Franklin. The hiatus has seen Gill smoothly transition from a big-time commercial artists to a well-respected legend in the business, and one of country music’s most active and well-respected elder statesman.

But Gill hasn’t been sitting on his laurels. His name regularly pops up as a contributing songwriter, singer, guitar player, and producer, and his fundraising work with the Country Music Hall of Fame is unmatched.

Down To My Last Bad Habit was produced by Vince Gill at his home studio, with help from respected engineer Justin Niebank. It includes twelve tracks, collaborations with Little Big Town and Cam, and ends with a George Jones tribute called “A Sad One Comin’ On.” You can listen to the lead single “Take Me Down” below.