Vince Gill Has One Hell of a Good Week 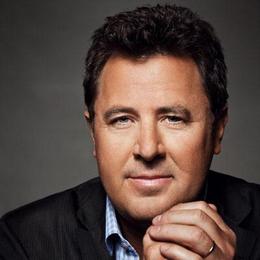 Who would have thought that Vince Gill would emerge as one of the big winners in country music over the past seven days, culminating in last night’s 48th Annual CMA Awards? Who even knew that the CMA was still paying attention to Vince, who once did a stint manning the hosting duties for the show for a dozen years during his heyday. But that’s the thing about Vince Gill. His accomplishments sort of creep up on you because he’s so refreshingly understated, honest, and humble.

You may do a double take to learn that Vince once won the CMA’s Male Vocalist of the Year five years straight between 1991 and 1995, and two of those years won Entertainer of the Year. Yes, this was during the heart of Garth-mania. You might be surprised to hear he’s won 20 Grammy Awards. But over the past seven days, the recognition Vince has received might top many of his other accolades because of its personal nature.

Last Wednesday, October 29th, Vince gill was in Oklahoma City at his alma mater, Northwest Classen High School, attending an unveiling of a 9 1/2-foot statue and plaque erected to commemorate the school’s most famous graduate. What did Vince Gill have to say?

“If you’re kind, life is going to be just great. I told somebody, I was joking, I said, ‘Oh, great, they’re going to put a statue up of me, and kids are going to go out there and put cigarettes out on my face.’ Maybe it’s too tall. But more than anything, I hope that where that statue sits that it’s not too much about who’s on that statue but just that it’s a place where you go out and be nice to each other.”

Then Tuesday night, the night before the CMA Awards, Gill was honored at the BMI offices on Music Row with the BMI Icon Award. BMI’s annual ceremony honoring songwriters is the oldest in the business, and past recipients of the Icon Award include Willie Nelson, Dolly Parton, Merle Haggard, and Kris Kristofferson. “I look at the past recipients of this award, and it’s pretty heavy,” Gill said. “It’s amazing people. There are so many people who mentored me and inspired me, and it’s a little overwhelming.”

Then at Wednesday’s CMA Awards, nobody was expecting Vince Gill to be honored. Nobody knew they had put together a video package with artists paying tribute to him as far ranging as Taylor Swift and Merle Haggard, making Vince weepy when Merle referred to Vince as a “friend,” and that the CMA’s had minted an Irving Waugh Award of Excellence trophy for the guitar player, tenor singer, and songwriter. Who even knew an Irving Waugh Award existed? Johnny Cash was the only other performer to receive the award. It was the moment the CMA made good on all the hard work Vince had put in over the years for the presentation, and all the contributions he’d accumulated to country music over the years.

Vince’s 26 million albums sold have bought him a lot of butter and beans, and all those CMA’s and Grammys sure must feel nice. But to be honored at his most humble beginnings by his high school, by his distinguished peers at BMI, and then the industry at large during the genre’s biggest night of the year, sure must feel good for ol’ Vince. Hopefully it reminds him that he’s not forgotten, and that country music still needs artists like him.