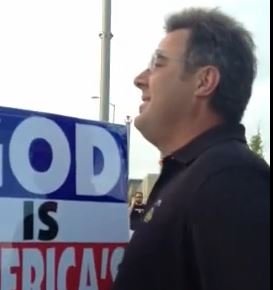 Kudos to Vince Gill, who yesterday (9-8-13) emerged from the Muriel Kauffman Theatre in Kansas City to accost a slew of Westboro Baptist Church protesters outside, apparently protesting his appearance because he is married to Christian music artist Amy Grant. Both Vince and Amy Grant are divorced after previous marriages.

“Vince Gill, what in the world are you doing out here? More importantly, what are you doing with another man’s wife?” says one female protester as Vince walks amongst them, with an anti-Westboro bystander taping the incident with a smartphone. “I came out to see what hatred really looked like in the face,” Vince responds.

“Don’t you know that divorce plus remarriage equals adultery?” the female protester continues.

“Don’t you know that (you) are lucky that you don’t have the sign that says something about my wife?” Vince snaps back, and then says, “(Jesus) said a lot of stuff about forgiveness, about grace. You guys don’t have any of it.” Then Vice moves on, telling another protester that he’s seen him on TV before, and then calls him a “dipshit.” Before the video cuts off, Vince asks, “Are any of you Phelps’s, or are you guys like the ‘C’ team?

Gill is currently promoting his new album with steel guitar player Paul Franklin called Bakersfield. The duo switches off covering songs from Merle Haggard and Buck Owens from the heyday of the Bakersfield Sound.