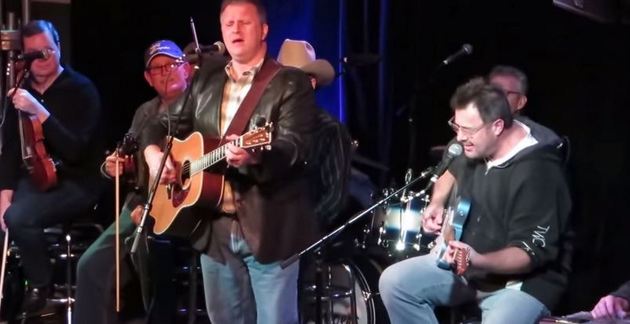 “I’ve been a musician all my life. Played, toured, recorded, and moved to Nashville back in 2011,” says Joe Hannigan, a native of Utica, NY, who spent a lot of his life in Boston. “We didn’t want to stay up north. We were tired of snow. I got a job in Nashville, and was doing some jamming and meeting some people. I had a recording studio up north and was going to build another one down here after I got settled in. And then I got hit by this thing.”

By “this thing,” Joe is referring to a series of events that saw him go from a musician whose hearing was just fine, to someone who was virtually deaf. It left the guitar player and singer facing a future where he may never hear again, and was completely unable to pursue his passion.

“In 2012 around May, I started losing my hearing a little bit, and they thought it was sinus issues or whatever,” Joe explains. “It took about three or four months to finally hit the right doctor at Vanderbilt and to be diagnosed with this disease called Superior Canal Dehiscence Syndrome, referred to as SCDS. You’ve got three little bones in your ear that are responsible for your hearing and your balance, and there’s a little hole in one of them. The symptoms that are common for most people with SCDS are when you’re walking, you hear the pounding of your feet in your head, you hear your heart beating in your head, you can even hear your eyes move, you hear your own voice in your head.”

Joe’s condition was very difficult to deal with, and though he could still hear through the SCDS, he decided to move forward with a solution to the problem instead of being bothered by it the rest of his life.

“The surgery has a 95% chance it will fix it. It’s pretty heavy duty though. They have to open up your skull, they have to move your brain in order to patch the hole, and we’re talking a pinhole sized hole. They scrape a piece of bone and glue it in there, and then they screw your skull back together.”

But the problem for Joe was the procedure not only didn’t work, it led to a cascading series of events that led to further hearing loss and other debilitating complications.

“After about a month you start hitting the audiologist, and after the first month, nothing happened. They thought maybe it was still inflamed, so they put me on steroids. Second month, and still nothing. By the third month they gave me the heart-sinking words that I’d officially lost my hearing in my left ear. So I was one of the 5% that lose their hearing as a result of the surgery. And as bad as that was, I still had probably 80% hearing in my right ear, but if you know what tinnitus is, some people have a ringing and so forth, but for me it was like a roaring, almost like a loud hair dryer in my dead ear. It became so loud 24 hours a day that I could not hear out of my good ear anymore because of the tinnitus. My bad ear went so mad that it was creating this false sense of loud noise that it was blocking the sound out of my good ear.”

Above his hearing loss and the tinnitus, Joe was also in a situation where the room was constantly spinning, and he had to learn how to walk all over again. The same bones that help control your hearing also control your balance. It took him a month to learn how to walk again. “My horizon was like being on a roller coaster constantly,” Joe says, and the entire experience put him in a place of severe despair.

“I wanted to throw all of my guitars away. It was the most depressing time. Being told I was going to be deaf, it was probably the worst 6 to 8 months of my life. It’s like an artist going blind. It was like a gunshot. I’d been playing music since I was eight-years-old.”

But Joe and his doctors at Vanderbilt in Nashville kept fighting, and they devised a solution.

“At Vanderbilt, they had learned that a Cochlear implant was a very effective fix for the tinnitus,” Joe explains. “With the implant, you’ve got a processor in your head that runs a coil through your ear and ultimately touches your audio nerve, and on the outside you have a magnet that’s a microphone, a battery pack, and picks up sound.”

Though the Cochlear implant could be a solution for Joe Hannigan, they had to fight to win approval to have the device installed. Because of an FDA regulation, if you have a good ear, which Joe hypothetically did, even though he couldn’t hear in it because of the tinnitus, then you can’t be approved for a Cochlear device. But Joe and his Vanderbilt team fought for an exception, and finally he was approved for the device. But would it work?

“Instantly when they turned it on, the tinnitus went away,” says Joe. “And then I started to be able to hear back in my normal ear better again.”

But Joe Hannigan wasn’t out of the woods. A Cochlear implant is not a replacement for a perfectly-working ear. It’s sounds are very robotic, and balancing it out with his good ear is no easy feat. However as a musician and studio owner, Joe was in a unique position to help improve the science of Cochlear implants for himself and others through his better understanding of sound, and being able to communicate this to the medical community.

“I was one of the very few people who had a good ear, and a Cochlear implant. And they wanted to know more about it so I’ve been doing the research study tour all over the place. It’s not perfect. It’s still a learning curve. The technology is still changing. I’ve been helping them because I know so much about music. I can literally plug my Cochlear implant into my recording gear, and then I can go to my audiologist and say, ‘Okay, I’d like to take this up two decibels,’ tell them what I’d like to change to help out because they have no idea what it sounds like.”

Joe Hannigan is still working through learning how to hear with the implant and his good ear in concert. “Now that it’s been a year, my brain is starting to take the two different sounds and meld them together,” he says. “But to this day, if I take off my implant, the tinnitus starts back instantly, and I virtually cannot hear anything.”

A year removed from his ordeal and able to play music again, Joe Hannigan’s true test, and triumphant moment came when he joined Vince Gill and The Time Jumpers on stage Monday, Feb. 2nd, at 3rd and Lindsley in Nashville. Hannigan had always wanted to sing harmony with Vince, and now he felt like he had a worthy excuse.

“I’ve seen the Time Jumpers a few times and seen them with guests, and I’ve thought to myself, ‘Man, I would like to do that.’ And then I heard Vince do a couple of my favorite songs and there was nobody in the band doing harmony with him. So I went to the Time Jumpers web page and wrote them a little letter just telling them about my experience and that I’d love to be able to have a chance to sit in, and I’d say that within 45 minutes I got a response back, and eventually everybody in the band say ‘yes.'”

Joe Hannigan showed up with guitar in hand, had a quick practice with Vince and the boys backstage before the show, and took the stage in front of an appreciative and impressed audience.

“Monday night was just so emotional, and I got to say Vince and the rest of the guys in the band were so nice to me. Vince even made a joke at the end of it when I was leaving, and he said, ‘We got to get those for everyone else in the band because you sing better than the rest of these guys.'”

Joe continues to help in studies involving SCDS, and in helping to make Cochlear implants where hopefully hearing impaired individuals can appreciate music once again.