What’s the old saying, if you could bottle and sell it? Well if you could bottle and sell the sensations that sweep over the human frame when Possessed by Paul James takes the stage and does his thing, it would become the most sought after of all contraband, muled across international borders in the crevices of narco traffickers to find its way into the possession of the world’s power elite as the most decadent and sought after of all consumables.

Live Possessed by Paul James is not musical entertainment. No, it is a religious experience. And though I’m sorry to say, Saving Country Music Labs Inc.’s experiment to bottle live PPJ with intent to distribute only resulted in a weird stain on the carpet and chemical burns to the back of my hands, there is still hope in the form of black vinyl pressed and grooved to deliver analog warmth. Yeah, a vinyl record may be impossible to conceal in a body crevice for smuggling, but it’s the next best thing to being there. 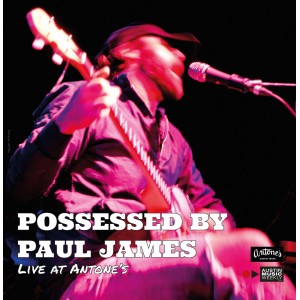 Live At Antone’s comes from the French label Normandeep Blues Records and features 6 songs on a 10-inch pie, pulled from a concert recorded by Austin Music Weekly on August 25th, 2011 at Austin’s famous Antone’s venue. This limited-edition 500 pressing is probably not the best primer or place to start with PPJ’s music (I would suggest Feed The Family), and it probably should be viewed more as a keepsake for his hardcore fans, but that’s not to say that there isn’t some pure music gold here.

Please nobody tell Possessed by Paul James this, but I secretly pray for sheer instrumental chaos during his live show at some point, because feeding back banjos and broken amps eventually bring Konrad down to singing a cappella, where his genius always shines. Live At Antone’s captures a vocal-only version of “Men Men Men” that might be one of the best pieces of recorded PPJ audio to be found.

This is followed by the song “Feed The Family”, which highlights one of the unique elements of Possessed by Paul James: the channeling and conversation about “man energy” that you just about never see or hear. Women talk about being women all the time, but men are usually afraid to talk about being men. But that rich, carnal desire of a father to feed his family, the predatory heart, the need for conquest and purpose are just as pure and beautiful of human desires as any that a woman can boast.

I will say I found a little sloppiness to this album, the recording lacks a bit in the low end, and while capturing some of the between-song banter from PPJ is very cool, it also comes across as a little incongruent in the way the banter is presented at times. I also thought the song “Ode To Rhythm” was called “Oh To Rhythm”, but then again, Konrad is known to change the name of a song on your ass. There might have been language barriers and stuff when putting this album together, but on the whole, the songs and music are definitely here, which is most important.

Live At Antone’s is an essential for any serious Possessed by Paul James fan, if only for the coolness factor of seeing the man’s face on vinyl. It serves the purpose of what both a live album and a vinyl experience should: capturing those magical musical moments that when you experience them personally, it seems like such a shame that you can’t share them with the rest of the world.

LIVE At Antone’s is available from Nayati Dreams in France for 14,00 Euro, which I believe is equivalent to about a hundred thousand million dollars. I got mine from a false compartment in a suitcase, so…