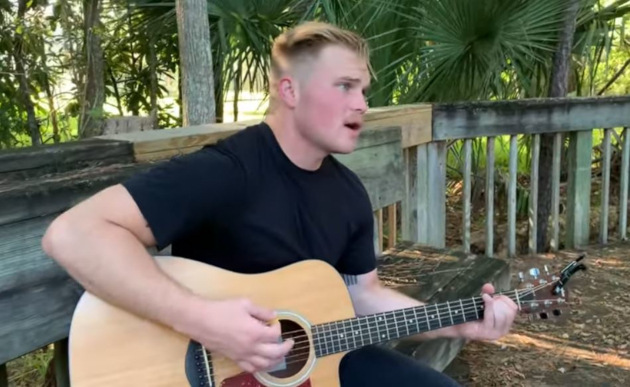 Full-time Navy enlistee turned country music songwriting sensation Zach Bryan has acquired some big muscle behind him to help forward his burgeoning music career. The surprise star released an album August 24th called DeAnn (read review) that went viral among many fans of Texas and Red Dirt country without any label or representation whatsoever, and it’s not just fans who’ve been paying attention to his rapid ascent. Managers, booking agents, and labels have been hot on the trail of the Tulsa, Oklahoma native as well.

Saving Country Music has confirmed that Zach Bryan has signed with the major booking and talent agency WME for representation. WME is the preeminent name for booking in country music, also representing names like Alan Jackson, Chris Stapleton, Dolly Parton, Miranda Lambert, and Garth Brooks, along with more independent-minded outfits like Blackberry Smoke and Parker McCollum, the latter of whom helped aid Zach Bryan in his ascent by supporting the songwriter on social media early on.

Numerous sources are also saying that Zach Bryan has signed with Danny Kang as his personal manager, though Saving Country Music has not been able to independently confirm that. Kang is the guy that swept in and started managing Mason Ramsey when the “Wal-Mart yodel kid” and his cover of “Lovesick Blues” went mega viral in the spring of 2018. He did the same with Lil Nas X as “Old Town Road” was making it big, and now manages both artists.

If true, it will be interesting to see what strategy Danny Kang uses to promote Zach Bryan. Though Zach’s album and videos have been streaming well, Zach is nowhere near the zeitgeist name that Mason Ramsey and Lil Nas X became. And while the success of Mason Ramsey and Lil Nas X was predicated on a single piece of media, the appeal for Zach Bryan has been spread across all of his songs. Zach Bryan is an introspective songwriter and album artist, not an overnight sensation. Nonetheless, the saaviness of Danny Kang could be useful to Zach Bryan, and similar to Mason Ramsey, Kang could perhaps work around Zach’s limited schedule.

“I’m active duty military. I’ve been in the Navy for six years,” the 23-year-old told Saving Country Music in early September. “My old man was in the Navy, my grandpa was in the Navy, my mom was in the Navy. My family’s just a Navy family … and I love being in the Navy. I think I might just keep being in the Navy and writing songs, and that’s about it—keep writing music that people might like. People have asked me to go on these tours and these mini tours in Texas, and I just can’t. It makes me feel terrible and I wish I could, but God has a way of doing things, and I think he’s doing it right.”

Saving Country Music has also learned that multiple labels are in hot pursuit of Zach, and he may be close to signing a deal with Columbia Records or another major label outfit soon.

“The messages people are sending me about my songs, that’s the only thing that matters to me,” Zach said in early September. “I have all of these labels, and people calling me and telling me things. It’s amazing and cool, and I think it’s really kind, and I appreciate every single person that puts effort into talking to me. But it wasn’t about that for me from the start. And if it wasn’t for this blowing up, I would still be the same kid playing these songs to myself in the same room.”

Speaking of, a few days after Saving Country Music last profiled Zach, he released a video for a song called “Headed South” that ended up going more viral than any of his previous efforts with the help of Reddit. He also recently released a studio version of the song now available through all streaming outlets.