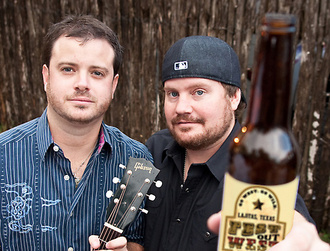 That’s right, the long-running legendary Texas country tour, and the long-anticipated album complimenting the collaboration is finally happening. Hold My Beer, a studio record featuring A-list Texas country talent Randy Rogers of The Randy Rogers Band and Wade Bowen trading licks back and forth will be released on April 26th, and some songs have been made available immediately, including an excellent little honky tonk number called “Good Luck With That,” and two acoustic songs recorded live from one of their many road excursions.

For many years, Randy Rogers and Wade Bowen have been embarking on self-proclaimed “Hold My Beer And Watch This” acoustic tours, purposefully playing smaller rooms, without their bands, in between bigger tours and festival commitments. It’s a way for the two to stay connected with the music, the people, and the places where they came from when they were just opening acts for the bigger Texas stars. It’s been officially called the “Hold My Beer And Watch This” tour for the last seven years or so, but acoustic tours with the two have been going on even longer than that. The length of the tour depends on availability of the two artists, varying from year to year.

“We met in San Marcos when Wade’s band had a gig in town,” Randy Rogers recalled to The Dallas Observer this summer. “I had a house there and a keg on that particular night, so after the show I invited him and his band over. I hosted these pickin’ parties for a bunch of us to sit around and play some songs for each other. I had just recorded [Rogers’ 2002 debut album] ‘Like it Used to Be,’ and Wade listened to the whole thing that night and we pretty much became great friends from that point. Our bands were also around the same age and the timing was really good for all of us.”

“We both like the idea of showing loyalty to the venues we played when we were getting started and for the people who supported us during that time,” Randy Rogers continues. “Our bands have outgrown the venues we played back then, so this is a great chance for us to play in rooms like Cheatham Street Warehouse in San Marcos, where I first started. It helps us to stay grounded and true in that sense.”

Though both The Randy Rogers Band and Wade Bowen are known for blending rock sensibilities into their music, the first “single” from the new album is nothing short of a foot-stomping, steel guitar-drenched hot honky tonk number sure to get your country music juices flowing, while the two acoustic bonus tracks give you a taste of what the “Hold My Beer” live experience is all about.

The album can be pre-ordered on Bandcamp, with an immediate download of the three songs. This long-anticipated collaboration has got to be one of the most sought after releases in Texas country in 2015.

NOTE: Wade Bowen will be performing on Conan Monday, 1/12.

***Pre-Order Hold My Beer on BandCamp