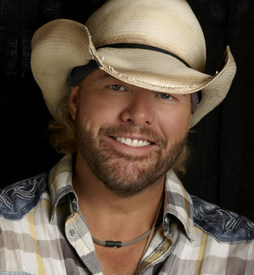 Many of the attendees to Toby Keith’s Saturday night (9-13) concert at the Klipsch Music Center near Indianapolis are up in arms over Toby Keith’s performance after Keith showed up drunk and stumbled through his set. Some families spent upwards of $300 dollars on tickets and drove from many hours away just to see Toby Keith slur his words and forget others throughout the concert in what one parent called an “embarrassing” performance.

Surprisingly, only one video from the 24,000-capacity venue has surfaced in the 48-hours since the concert, but this one piece of evidence does not put Toby Keith in a very flattering light. Singing his 9/11-inspired mega hit “Courtesy of the Red, White, & Blue,” Toby Keith can be clearly heard heavily slurring his words and at times trailing off, until at the end of the line, “So we can sleep in peace at night when we lay down our heads,” he descends into an inaudible garble, inspiring the videographer to exclaim, “Oh God!”.

As a courtesy, Saving Country Music has isolated the audio in question in the below video, so inquiring minds can listen and determine just how drunk Toby may or many not have been that night.