Watch Out for Rhiannon Giddens 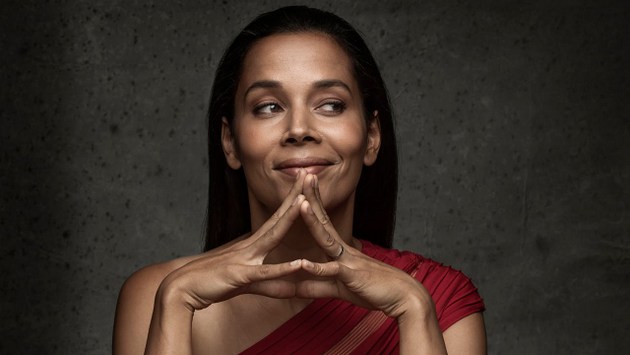 We’re not screwing around anymore here folks. This is no longer all about playing side stages at MerleFest so bluegrass gawkers can remark, “Oh, look at that, it’s a black old time band.” It’s no longer just about coming to your local college town to play and assembly that’s simulcast on the local NPR affiliate.

Not to downplay the contributions of the Carolina Chocolate Drops over their now 10+ year run (or MerleFest side stages). Hell, how could you? Rhiannon Giddens and the Carolina Chocolate Drops offer a burst of creativity and diversity in a many times stuffy and insular music space, and do it with conviction, authenticity, and in a way that’s like a living history lesson to the contributions African Americans made to American roots music.

But the talents of Rhiannon Giddens are bigger than any one band, any one song or album, or even any one medium. We first saw her as the humble yet keen front person of a cool band, but in a forum that was somewhat limiting, or at least not as flattering as it could have been to flaunt her true vocal and songwriting talents.

And now, all of a sudden, certainly overdue but definitely warranted, and completely on her own terms, Rhiannon Giddens is taking off, or at least she could be very shortly, and in a big way.

She’s not doing it through slithering her way into pop country songwriting circles, or selling out with some big single that may impact country radio. She’s doing it by being her own badass self, and in a way that gives the music and entertainment industry no choice but to pay attention, and figure out how to apply her talents to whatever they’re doing because she’s just so damn good and they want to be a part of it. And it could all result in the shot diversity country roots music and maybe even the mainstream has long been looking for, but failed to deliver through other avenues.

On Monday (9/13) it was officially announced that Rhiannon Giddens would be the latest recipient of the Steve Martin Prize for Excellence in Banjo and Bluegrass. Selected by namesake Steve Martin, along with banjo maestros Bela Fleck, Tony Trischka, and J.D. Crowe, it bestowed a $50,000 bounty to the North Carolina native.

But that is just the beginning. A couple of weeks ago it was announced that Rhiannon Giddens would be the latest cast member of the former ABC, now CMT drama Nashville. Just how significant her role will be we’ll have to wait and see, but if nothing else, it will give her some nationally-televised face time, and hopefully a forum to showcase her musical talents at least once or twice.

But television viewers didn’t have to wait for the season premiere of Nashville to see Rhiannon on the screen. On Monday night she appeared with Eric Church on The Tonight Show singing her duet with the country superstar, “Kill A Word”—a song that was just released as a radio single, and some think could be headed for #1 and a host of distinctions for its forward-thinking message.

If any of this will translate into a more intense focus on the music of Rhiannon Giddens and the Carolina Chocolate Drops remains to be seen, but it certainly can’t hurt.

So when you’re looking around for who could be that next female to rise up out of the ranks and really make a positive impact on country music, you damn better consider Rhiannon Giddens in that conversation.