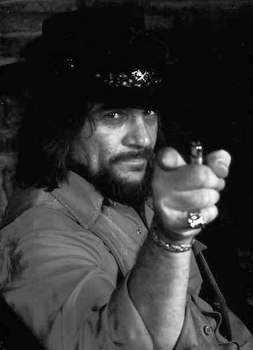 The flap over Luke Bryan’s characterization of Outlaw country artists as cocaine-snorting cavorts “laying in the gutter, strung out on drugs” continues, despite Luke Bryan attempting to clarify his comment on Twitter late Friday (7-10).

After Saving Country Music and others took exception to the comments, Luke Bryan responded,

READ: Willie, Waylon, and Merle on Cocaine, In Their Own Words

Now one of the members of Waylon’s extended family has spoken out about Luke’s initial words and his apology. Kathy Pinkerman Jennings, who is the wife of one of Waylon Jennings’ sons Buddy Jennings, spoke out about the matter via Facebook initially on July 10th, and the posted a video to YouTube late Saturday night. Despite some media reports, Kathy Jennings makes it clear she is not speaking for the family of Waylon Jennings, only for herself.

To Luke Bryan :
I hope your family members are proud of you for using your WORLDWIDE platform to take the time to disrespect my Father in Law. You have managed to PROVE to the world your true self.

Albeit that Waylon’s drug use is well documented and something he overcame, I assure you, he was never “laying in a gutter.” At the peak of his career and drug abuse, he was making history and setting records. He, single handedly paved the way for you and everyone else to make music the way the artist wanted to make it. I’m not willing to waste my time to debate your “music” and / or the fact you have zillions of fans – I will however, not sit back and be quiet when you have so blatantly disrespected Waylon.

I recall the time I was at the Grand Ole Opry to visit with Andy Griggs, you were making your debut appearance. My friend that was with us had just seen your video. As we stood at the side of the stage, Jeannie Seeley [Seely] was talking to us and you walked over to introduce your self to her and told her how much you admired her, she in turn introduced you to myself and my husband. I almost got a cavity because of the sweetness of the words coming out of your mouth – you told us Waylon was one of your musical heroes. You went on and on and on.

This is not about music, Outlaw Country, whatever – it’s about DISRESPECT.

You are a platinum, disrespecting, no singing, whining, grasping for media attention, asshole. Use your platform for something good, instead of bashing the LEGENDS that came before you.