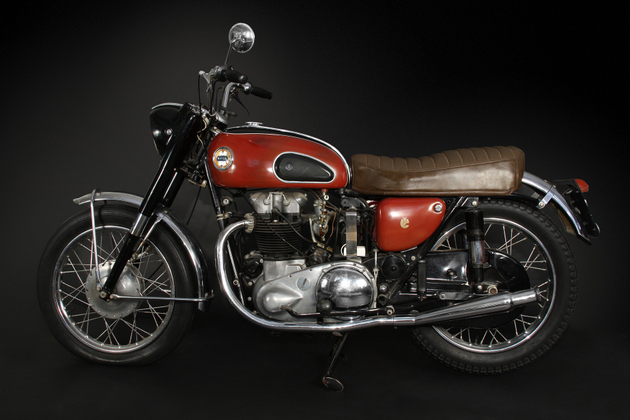 The crown jewel and center of interest at this weekend’s auction of the Waylon Jennings estate at the Musical Instrument Museum in Phoenix, AZ was the 1958 Ariel Cyclone motorcycle once owned by Waylon’s mentor Buddy Holly and given to Waylon on his birthday in 1979. Though early reports had the motorcycle not reaching the auction reserve with a bid of $375,000, and other reports said it sold for $450,000, Saving Country Music has confirmed with Guernsey’s Auctioneers that the bike indeed did sell eventually, and for a whopping $457,500.

Though the high bidder currently remains anonymous, Lindsey Heller at Guernsey’s was able to confirm the eventual destination of the bike. “I can tell you that the buyer is from Lubbock, TX, and that it’s his intention to ride it once, and then take it straight to the Buddy Holly Museum and put it on long-term loan.”

Lubbock is Buddy Holly’s hometown and right down the road from Waylon’s hometown of Littlefield. The two music stars met in Lubbock in the 1950’s.

Another item of high interest, Willie Nelson’s braids that he sent to Waylon to celebrate his sobriety, did not go for $37,000 as has been widely reported. They actually sold for $31,250—still a handsome price.

The Buddy Holly Center in Lubbock with its signature thick-rimmed glasses sculpture out front is owned by the City of Lubbock and states its mission as, “Preserving, collecting and promoting the legacy of Buddy Holly and the music of Lubbock and West Texas, as well as providing exhibits on Contemporary Visual Arts and Music, for the purpose of educating and entertaining the public.”

In May of 1958, Buddy Holly and his original Crickets flew in to Dallas’s Love Field airport on a connecting flight back to Lubbock after a big tour. 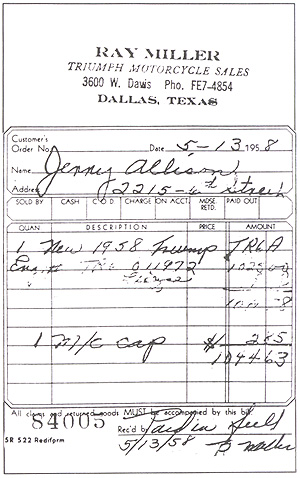 “They loved Marlon Brando in ‘The Wild One,’ and when they got to Dallas”¦they decided on the spur of the moment to buy motorcycles and drive back home on them.” Waylon Jennings recalled in his Autobiography. “They took a cab into the city and walked into a Harley-Davidson shop. They had their eyes on a trio of 74-inchers, but the proprietor didn’t think they had any money and treated them like a bunch of bums. ‘Hell, you boys couldn’t even begin to handle the payments on that.'”

–
“Then they went over to Miller’s Motorcycles, which specialized in English bikes. There, Joe B, and J.I. (Allison) bought a Triumph each, a TR6 and Thunderbird, respectively, while Buddy picked out a maroon and black Ariel Cyclone, with a high compression 650cc Huntsmaster engine. They paid cash, bought matching Levi jackets and peaked caps with wings on them, and rode home through a thunderstorm.”

Buddy Holly’s father had kept the motorcycle until 1970, when he sold it to someone in Austin, TX. Then in 1979 for Waylon’s 42nd birthday, the two remaining Crickets Joe B. and J.I. tracked down the 1959 Ariel Cyclone, bought it back, and had it hand delivered to north Texas where Waylon found it sitting there in the middle of his hotel room after walking off stage that night.

“What else could I do? I swung my leg over it, stomped on the kickstarter, and it burst into roaring life. First kick. It was midnight, and it sounded twice as loud bouncing off the walls of that hotel room. I knew Buddy wouldn’t mind.”

Home video of Buddy Holly and The Crickets with their new motorcycles: