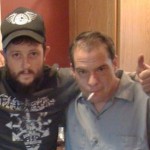 A month or so ago when I attended a JB Beverley show here in Austin, it occurred to me how much Wayne “The Train” Hancock has emerged as a leader and true elder of the music in the last year. That night he made his way on stage with The Wayward Drifters, and later collaborated with them on a song back at his house. Earlier in 2010, he cut two duets with the up and coming Lucky Tubb for his release Hillbilly Fever. And now on the upcoming Bob Wayne release from Century Media, “The Train” has lent his name once again to an emerging star.

Outlaw Carnie features a collaboration from the two Wayne’s called “Everything’s Legal in Alabama,” and you can see Bob talking about this track, and all the others on the JUST released EPK!

Bob Wayne and Wayne “The Train” are going to be heading out on tour together, check below for confirmed dates, but more dates will be added soon. It will start in April in Colorado and end in Tulsa on May 7th. Bob has another tour starting in March, and both Bob Wayne and “The Train” have some other dates just added, so make sure you go to Road Bound Booking to keep up to date on these and the other artists in their stable, which now includes JB Beverley and Hellbound Glory!