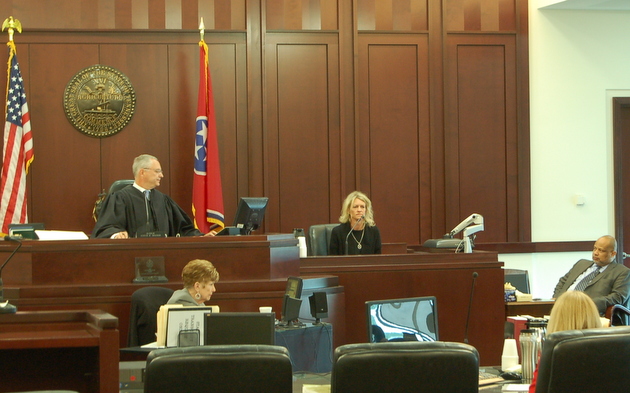 Despite the actual sentencing of Chris Ferrell in the 2nd Degree Murder of country artist Wayne Mills being delayed now until April 24th, the bulk of the sentencing proceedings occurred as scheduled while many members of Wayne’s immediate and extended family, as well as numerous friends and fans of the country artist watched on. Only a few individuals were on the defense side of the courtroom, while the prosecution side was nearly full.

The reason for the delay in sentencing is that the defense has decided they want to call witness Susan Branham to the stand, but she was currently in Disney World at the time of the proceedings. Branham was subpoenaed in the initial trial and was never called. The circumstances that transpired in the sentencing compelled the defense to delay the proceedings until Susan Branham could take the stand. Susan was the individual who called Chris Ferrell right after the shooting, and was one of three witnesses on the property when the shooting occurred.

After one of the responding officers took the stand for the prosecution, Wayne Mills’ sister Paula Lemons addressed the court. She stated that she was very close to her brother. “The biggest statement I’d like to say is that I miss my brother. The worst part is that I can’t talk to him now.” Paula Lemons said that family gatherings would no longer be the same without her brother around.

Then Wayne’s widow Carol Mills took the stand. She started by reading a letter her 8-year-old son Jack Mills wrote for the court. She was very emotional while reading the letter, having to stop on numerous occasions to compose herself.

My name is Jack Mills, and I am 8-years-old. My daddy is Wayne Mills. When I found out my daddy died, I asked if it was a car accident, or if he had crashed his van. But that was not the case. I was mad, sad, and confused, and I wanted to ask questions about why daddy died. It doesn’t feel right since my dad has been gone. My daddy was funny and smart. And what I miss the most is when my daddy put his hands and fingers through his goatee when we played checkers together. I miss that I cannot go to Chuck E Cheese with him anymore. I can’t play football with him anymore, and I can’t play pitch with him anymore, and I have to replace my daddy with a pitching machine.

I feel like it is not fair that my daddy is gone. I think Christopher is a bad man for killing my daddy, and I really want to know how long Christopher will be in jail. I hope for a long time.

Then Carol Mills made her own statement to the court.

I have to say that it’s very hard, and has been very hard, for 503 days, to sit here and think about what I would say if given the opportunity. On November 23rd at 5 o’clock AM, unbeknownst to me, my life was changed forever. And even worse, my son’s life was changed forever. My husband lay dying in a hospital, and because of mis-identification and misinformation, I was not able to be with him for 5 1/2 hours. I then had to be escorted into the trauma center under police protection, all while trying to figure out what had taken place. And at the end of that day, I had to come home and tell my son that his dad wasn’t ever coming home again. And that was day one. So to sum up what I have lost and what Jack has lost is very hard to put into words.

There won’t be any opportunities for my son to have a dance party with his dad in the basement doing the electric slide. There are things that I can’t compensate for. He [Jack] plays baseball, and half the time I’m yelling to run when the coach is telling him to stop, and those were things Wayne could do. Nobody can ever, ever replace that or make up for that, and like Paula [Lemons] said, a split decision not just changed my life, and not just Jack’s life, but all of the hundreds of friends Wayne had, and all of the people that used to come and see him play. And I’m hearing about that constantly. It’s day in and day out, it doesn’t go away, and my life has been changed forever. It doesn’t even matter, I would take all the pain in the world if it could take one second of the pain that Jack has had to go through for being without his dad.

After listening and sitting through the trial, the defense was right about one thing: friends don’t murder their friends. Secondly, if we’re closing arguments with George Jones songs, then my vote is for “Still Doing Time.”

Carol Mills’ reference to George Jones songs has to do with the defense referencing George Jones “Choices” in their closing statements during the trial. Defense attorney David Raybin cross examined Carol on the specifics of why police did not have the correct name of Wayne. The defense attempted to portray it was the police department’s fault, and not Chris Ferrell.

Then it was the turn of the defense to address the court. Defense Attorney David Raybin first called Thomas J. Norman to the stand—an attorney for Chris Ferrell in a previous assault case pending against Mr. Ferrell. The defense then called Chris Ferrell’s friend Shawn Davis to the stand, who had flown in from Los Angeles to testify for Ferrell. The two had met in 2001 in Nashville. “He may as well be a brother to me,” Davis stated. “Chris is a good man.”

Then Chris Ferrell was allowed to address the court from the lectern. He was crying throughout his statement.

I will carry the burden of that horrible night with me forever. I’ve wished every minute of every day that I could go back and do it differently, and that Wayne were still here today. I am so so sorry. After such an amazing day, I could never imagine how what started as such a great night could turn into such tragedy. My actions in an instant changed so many lives forever. Wayne and I were having fun. We always enjoyed each other’s company. I didn’t hesitate to invite him back to my bar with me for the party, or drive him over there. Wayne spent many nights at my home, and at my business. I was aware of Wayne’s prior DUI and his assault, and I did not want him to have any more trouble, and I could tell he had been drinking that night.

How sorry I am will not change [anything], and I blame myself first and foremost. After this happened, I thought Wayne simply had left. I had no idea it was as severe as it turned out to be. When I realized what had transpired, I lost all of my composure like nothing I had ever experienced. I panicked, and I’m sorry. Regretfully I tried to correct a mistake with another, but I should have just been forthright and told everyone what had happened to begin with. I feared there was no way anyone could understand {inaudible}. Upon finding there was no weapon as I had thought, I planted the gun on the table, {inaudible}, and I made another mistake by not telling anyone what really happened, and this was wrong. I will always regret these actions. They compounded an already impossible situation. I was ordered by the courts to not contact the Mills family. I wanted to. I was never allowed to express my sorrow and regret in court, for Carol and Jack, and any of Wayne’s family and friends, who have had to suffer forever for what I did that night. I know ‘I’m sorry’ is not enough, but I truly am. If I were able to do anything I could to help them, Carol and Jack.

My actions have also destroyed the lives of many that have cared about me. My mother, who has only one son. She suffers every day because of what I have done. She’s always been a wonderful mother. I am ashamed for what I have done, and what I have put her through. I’m sorry. I wish I could take it all back. I’ve tried to live a life helping others in any way I was able. I am truly humbled so many people took their time to write, and I know you have read those letters. I hope and pray that the unfortunate actions of one night will not define me as a person. I never wanted any of this to happen. I would hope you would allow me the opportunity to continue to help others in the future. I want to thank you for giving me the chance to speak to you in these proceedings, and the sentence which you will be setting for me. Thank you your honor.

The sentencing of Chris Ferrell is scheduled to resume on April 24th, pending the availability of Susan Branham.