Like many Facebook “like” pages devoted to a common cause, the Facebook page called “We Hate Pop Country” has accumulated quite a few “likes” over the last few years by selling T-shirts and then taking the money to help promote their Facebook posts that mainly consist of memes mocking today’s country stars. But unfortunately over the last several weeks, the site has resorted to selling T-shirts using the likeness of numerous country music legends including Merle Haggard, George Jones, and Conway Twitty without any authorization from the estates of the artists, and none of the proceeds going to the artists or heirs who are the rightful owners of all personality rights. This practice is both illegal, and disrespectful to the very artists We Hate Pop Country purports to want to help support.

Saving Country Music reached out to the respective estates and managers of the artists affected to confirm use of the likeness was unauthorized, and that the artists were receiving no money. “This product is not authorized at all,” says Kirk West, the Business Manager for the George Jones Estate. “They need to remove this product and never use George Jones name again or I will sue them.”

Making the sales even more spurious, We Hate Pop Country will post links on Facebook to the t-shirt postings on Teespring.com with lots of verbiage about how they’re trying to support their “everlasting efforts of promoting emerging country performers of the modern Americana roots music movement,” yet will only leave the Facebook posts up for a few hours, tasking Facebook users to “Hurry! Ordering will only be available for so long…” and removing the postings after a couple of hours before too much suspicion is aroused.

As Chron explains about using celebrity images on T-shirts:

Celebrities who claim their right of privacy can sue to prevent businesses from printing their image on T-shirts without permission. Businesses that legally print celebrity images on promotional items usually have contracts that outline the parameters for using those images, along with any compensation the celebrity is entitled to receive. The right of publicity also limits the use of celebrity images on T-shirts. This right recognizes people’s economic value in relation to their work and creativity. Celebrities have the right to exploit the value of their likeness as they see fit, so the unauthorized use of a celebrity’s image violates his right of publicity. Celebrities who sue companies for using their image without authorization can prevail by proving that their image has commercial value.

These rights also extend to deceased individuals, with the rights being retained by the estates.

Furthermore, We Hate Pop Country admits it is not compensating the estates of these country legends for the use of their likeness because in their Facebook posts they specifically state, “All of the proceeds help to ensure that the official We Hate Pop Country community may continue to both grow, and thrive…” 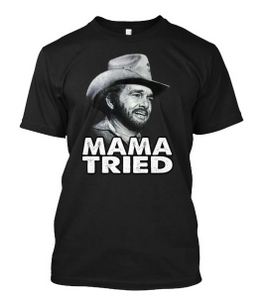 Like many of We Hate Pop Country’s postings and practices, when Facebook users have questioned the legality of the T-shirts, We Hate Pop Country has censored their comments, blocked them from their page, and even used threats and intimidation, including gang reporting Facebook users as spam accounts to get them either locked out of their accounts, or have their accounts deleted.

Saving Country Music reached out to Teespring.com about the unauthorized and illegal T-shirt postings, and they have not responded, or removed the postings. However their policy clearly states that We Hate Pop Country’s postings are wrong, and sellers cannot use “an individual’s name or likeness without their permission.” Teespring’s policy states:

Right of publicity is the right of famous people to control the commercial use of their name or likeness. So Taylor Swift has the right to decide whether her name or face will appear in a product advertisement. Right of publicity is really a subset of the larger right of privacy that applies to all people. In the context of marketing and merchandise, that means each person is entitled to control the use of their name and image in a commercial context. In keeping with right of publicity and privacy laws, Teespring will not be able to print shirts that include the name or likeness of any individual, including celebrities, unless we are instructed otherwise by the individual or their agent.

We Hate Pop Country’s illegal T-shirts come as country artist are being exploited more than ever with unauthorized use of their likeness and intellectual property. Earlier this month Kacey Musgraves exposed the sale of items quoting her lyrics, and Ray Wylie Hubbard has also been a victim of unauthorized merchandise recently. 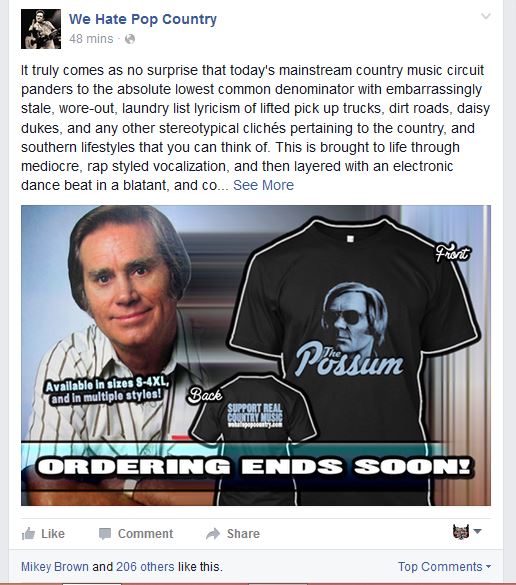 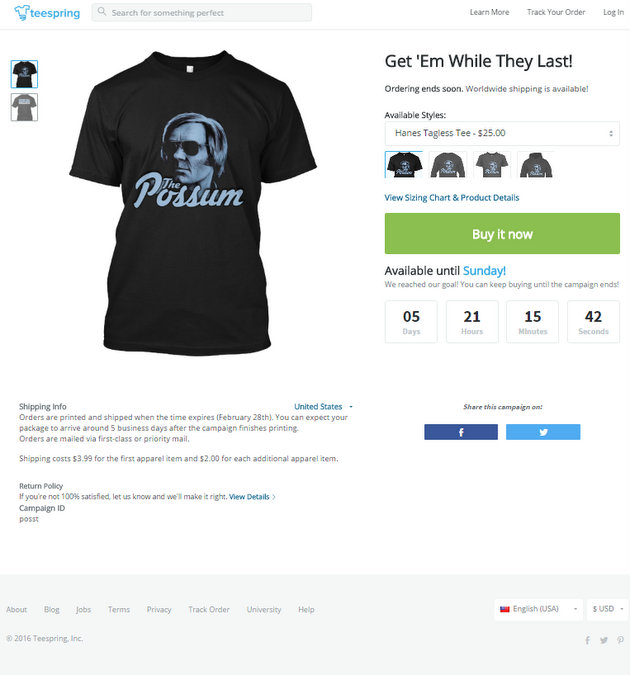 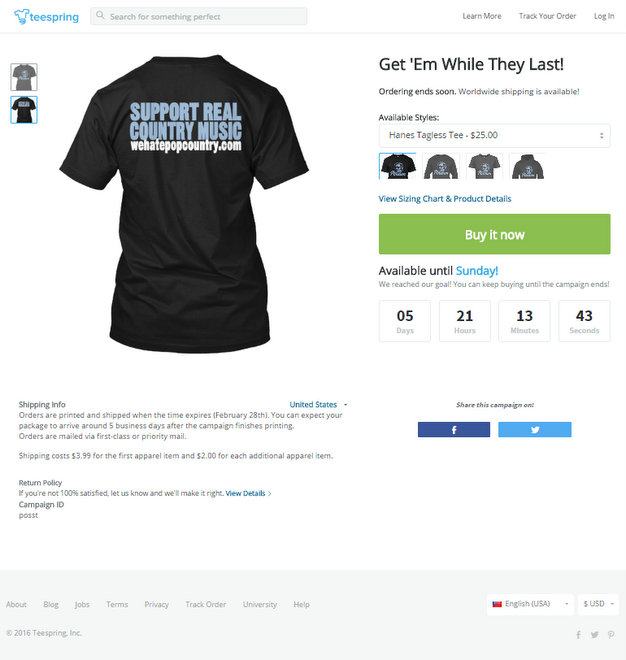 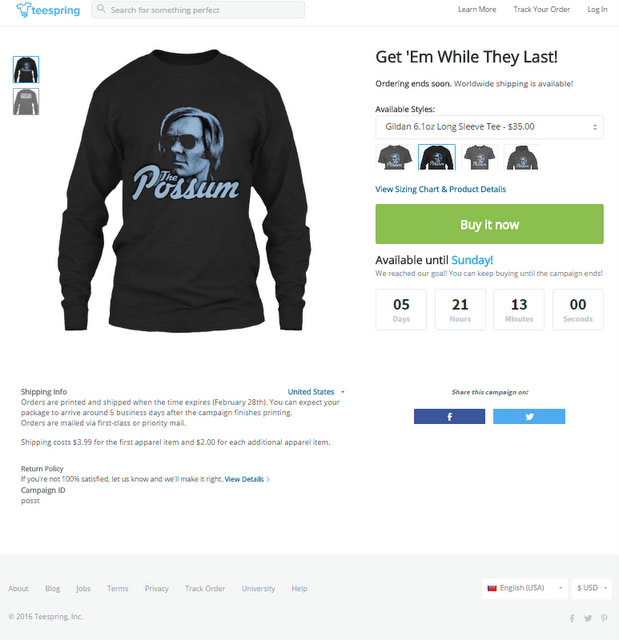 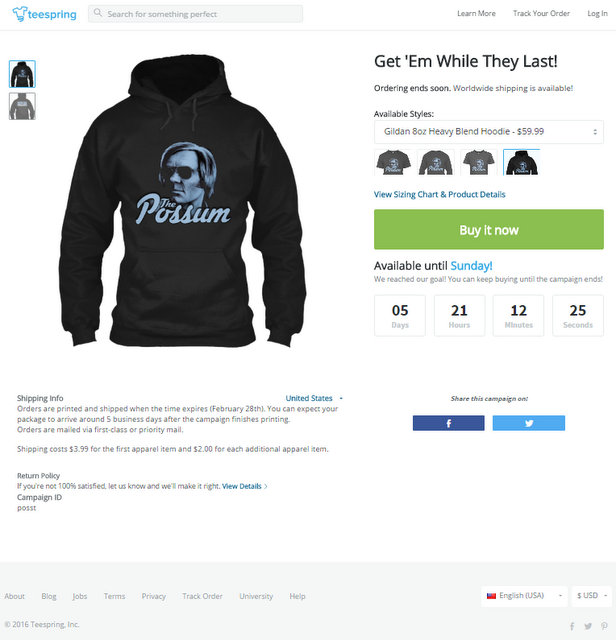 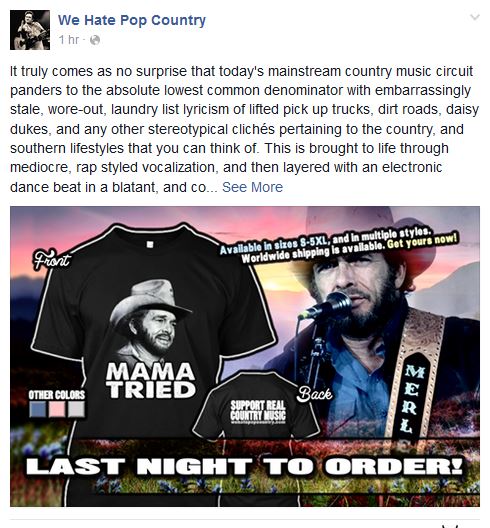 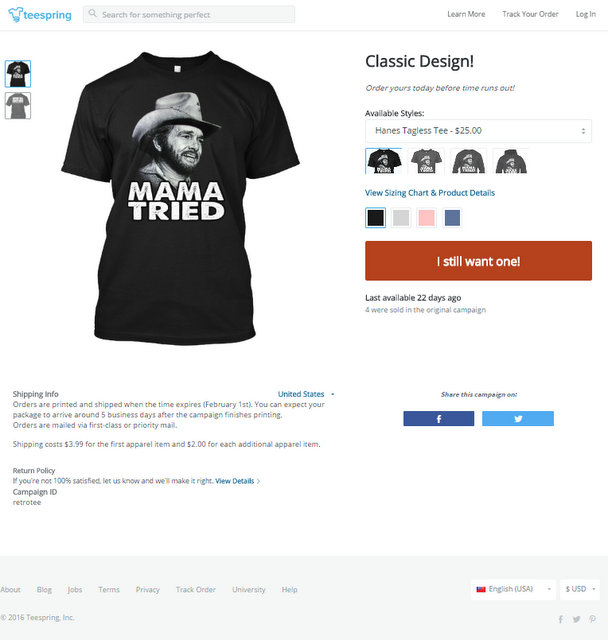 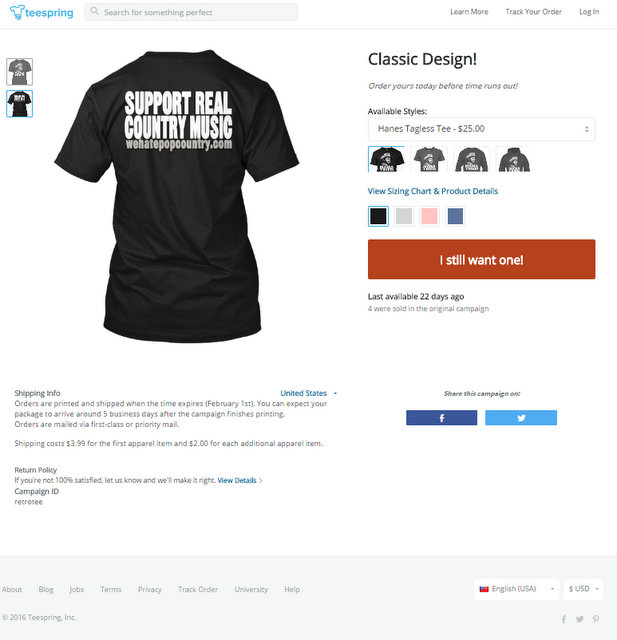 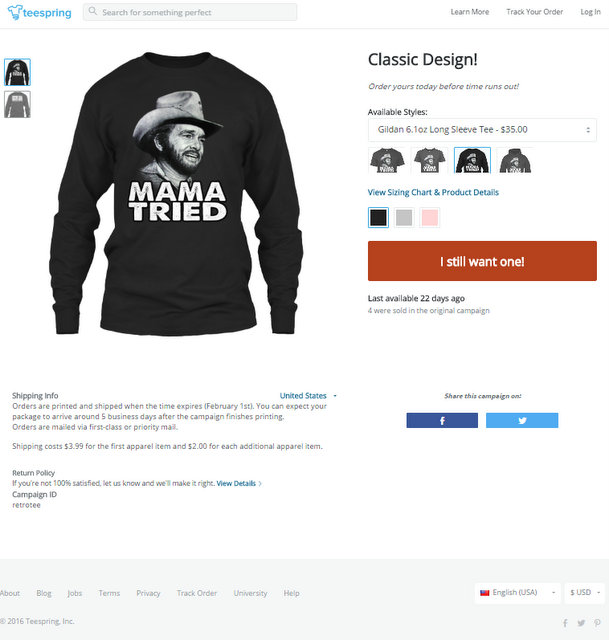 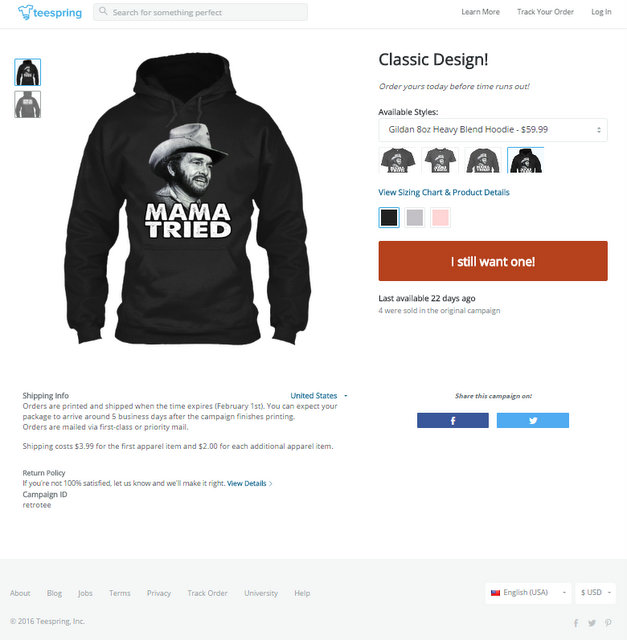 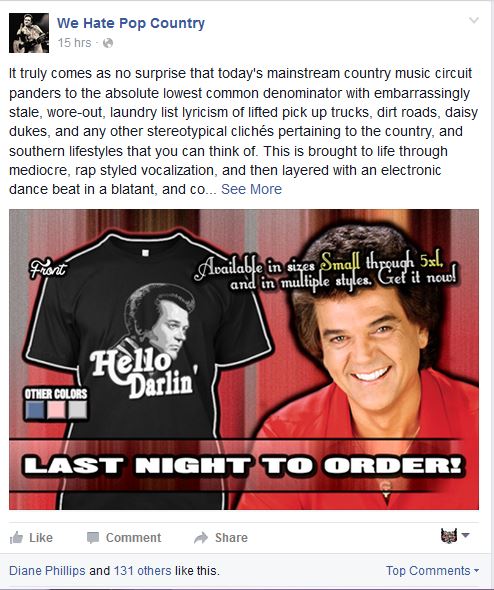 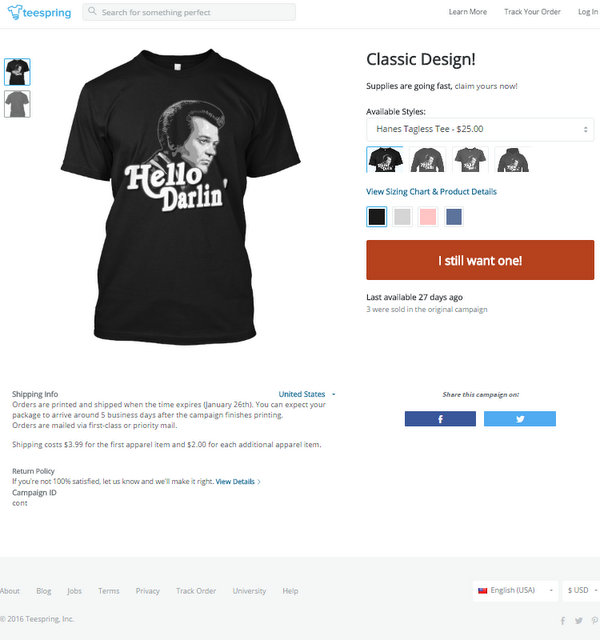 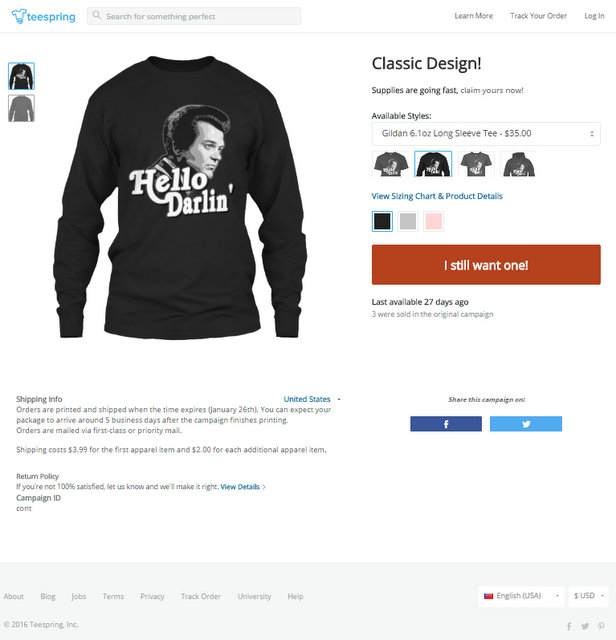 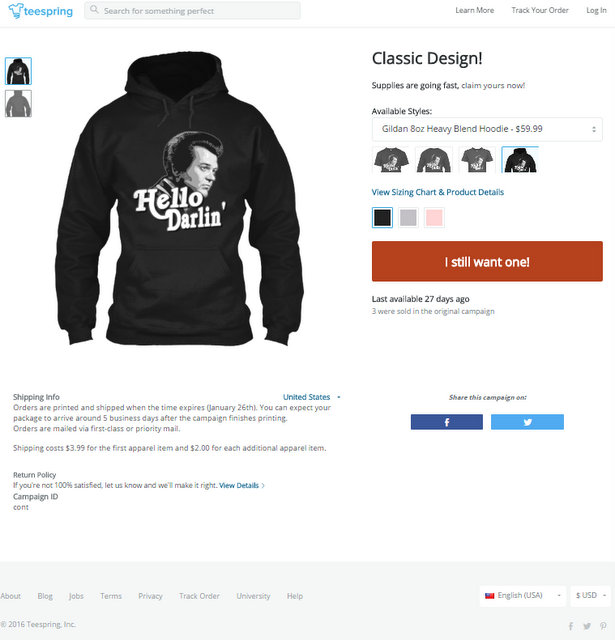 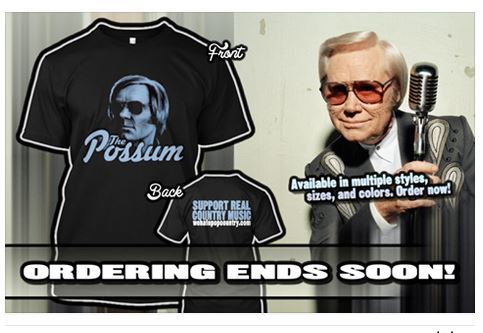 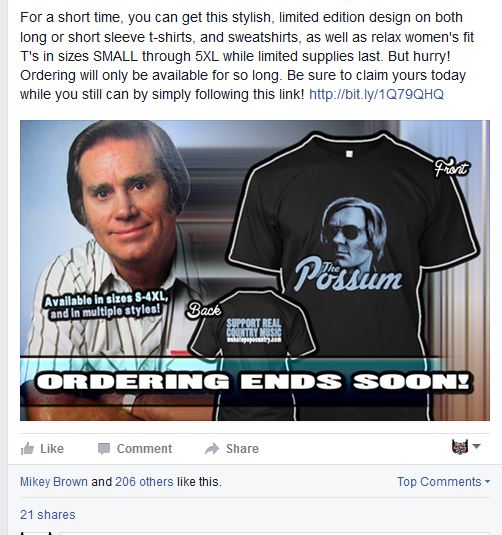 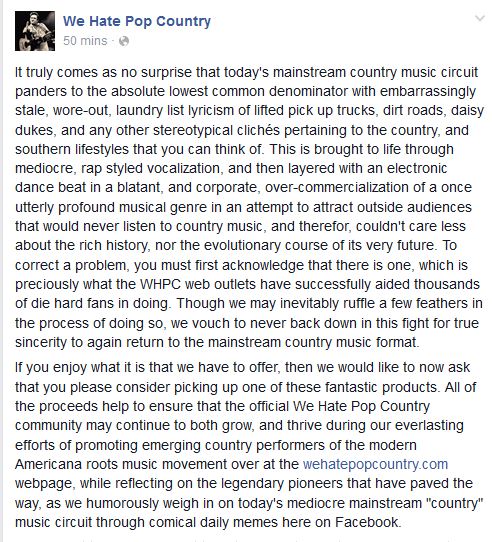 It truly comes as no surprise that today’s mainstream country music circuit panders to the absolute lowest common denominator with embarrassingly stale, wore-out, laundry list lyricism of lifted pick up trucks, dirt roads, daisy dukes, and any other stereotypical clichÃ©s pertaining to the country, and southern lifestyles that you can think of. This is brought to life through mediocre, rap styled vocalization, and then layered with an electronic dance beat in a blatant, and corporate, over-commercialization of a once utterly profound musical genre in an attempt to attract outside audiences that would never listen to country music, and therefor, couldn’t care less about the rich history, nor the evolutionary course of its very future. To correct a problem, you must first acknowledge that there is one, which is preciously what the WHPC web outlets have successfully aided thousands of die hard fans in doing. Though we may inevitably ruffle a few feathers in the process of doing so, we vouch to never back down in this fight for true sincerity to again return to the mainstream country music format.

If you enjoy what it is that we have to offer, then we would like to now ask that you please consider picking up one of these fantastic products. All of the proceeds help to ensure that the official We Hate Pop Country community may continue to both grow, and thrive during our everlasting efforts of promoting emerging country performers of the modern Americana roots music movement over at the wehatepopcountry.com webpage, while reflecting on the legendary pioneers that have paved the way, as we humorously weigh in on today’s mediocre mainstream “country” music circuit through comical daily memes here on Facebook.

For a short time, you can get this stylish, limited edition design on both long or short sleeve t-shirts, and sweatshirts, as well as relax women’s fit T’s in sizes SMALL through 5XL while limited supplies last. But hurry! Ordering will only be available for so long. Be sure to claim yours today while you still can by simply following this link!