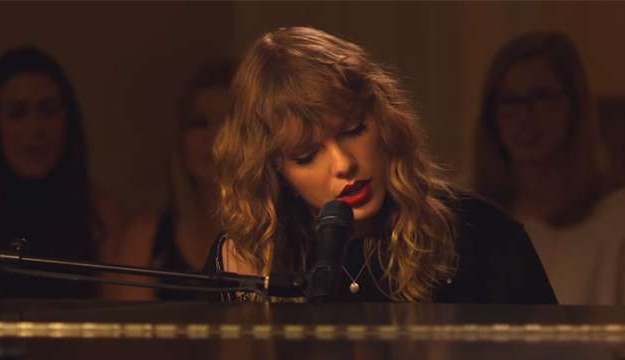 Taylor Swift is coming back to country, or at least to country radio. Officially announced on Thursday (11-16), her song “New Years Day,” which is the final track from her sixth studio album Reputation, is being serviced to country radio by her label Big Machine, hoping to rekindle Swift’s history and success with the format and hopefully land a hit ahead of the actual New Years Day looming ahead on the calendar.

Though not country whatsoever, “New Years Day” is a piano ballad and probably the most organic track off of Reputation, which otherwise is heavily embellished with hip-hop and EDM influences and the dirty work of super producers such as Max Martin and Jack Antonoff, even more so than Swift’s previous exclusive pop effort, 1989.

Releasing “New Years Day” to country in some respects validates the rumors that swirled ahead of Reputation that Swift would include some “country” songs on the new record. Of course “New Years Day” is country in name only, but it also may satiate a desire from her label owner Scott Borchetta to continue to court country radio with Swift. Borchetta previously begged Swift to include a track or two on 1989 to bring to country radio, with Swift declining, not wanting to confuse fans about the lane she had chosen for her music moving forward.

Servicing “New Years Day” to country radio may be dictated by Swift herself, or it may be coming from Borchetta and Big Machine. Perhaps the strategy here is to have a song in the country format, while Swift simultaneously permeates the pop format with other singles. So far early estimates have Reputation selling over a million copies in its first week.

Though Swift has said previously she is not interested in calling herself country anymore, country still seems to be somewhat obsessed with her, or the attention she can bring to the format. At the 2017 CMA Awards, the Swift-penned song “Better Man” recorded by Little Big Town was nominated for both Single of the Year and Song of the Year, eventually winning for Song of the Year, which is a dedicated songwriter award. Swift was not in attendance to receive the award, but it likely helped re-open the door for Swift to throw her weight around in the country format once again.

It will be very interesting to see the traction “New Years Day” receives on country radio heading into the holidays, and if it’s successful, what impact that may have on country radio long-term. Will we see more Swift songs released as singles, or more pop stars trying to court country radio?