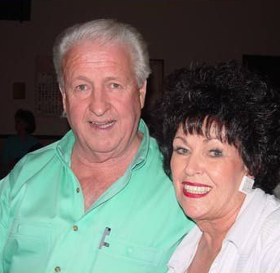 The husband, manager, and long-time right hand man of the Queen of Rock and Rockabilly has died. Wendell Goodman, who married Jackson in 1961, passed away on Sunday, May 21st after Wanda Jackson performed Saturday evening at the club Saturn in Birmingham, Alabama. Jackson had also performed at the Nashville Boogie in Nashville on Friday, and Wendell had accompanied her. The news comes as a shock to many fans who just saw Wendell in the last few days.

Wendell Goodman met Wanda after writing Wanda’s 1961 hit “Right or Wrong.” At the time, Wendell was a computer programmer for IBM. Though not as high-profile as Wanda’s short-lived relationship with Elvis Presley, Wendell Goodman’s work and encouragement of Wanda would result in the longevity of her career. After the passing of Wanda’s father and first manager Tom Jackson, Wendell took over as manager of Jackson, and launched “Wanda Jackson Enterprises” based in Oklahoma City. The couple had two children together, and raised them in Oklahoma City.

Wanda and Wendell celebrated their 50th wedding anniversary in 2011, and took a trip together to the Bahamas. In recent years, interest in Wanda Jackson has increased after Jack White produced an album The Party Ain’t Over for Jackson in 2011. Shooter Jennings manager Jon Hensley also helped revitalize Jackson’s career in later years. Wanda has become a favorite of rock & roll, country, and rockabilly revivalists, with Wendell being right at her side for club shows and festival appearances.

According to NewsOK, funeral services will be at 2 p.m. Friday, May 26th at the Southern Hills Baptist Church chapel at South Lakes, in Oklahoma City.