2017 has already seen a new dose of West Coast country, and with the help of one of the Heartbreakers when Marty Stuart released Way Out West earlier this year with long-time Tom Petty guitarist Mike Campbell in the producer seat. Now Tom Petty himself and a host of other cool folks have come together to collaborate on Byrds and Flying Burrito Brothers alumnus Chris Hillman‘s first record in over a decade called Bidin’ My Time.

The album includes a collection of songs from in and around Chris Hillman’s career, but many that fell through the cracks in one way or another. It includes Pete Seeger’s and Idris Davies’ “The Bells of Rhymney,” which appeared on the very first Byrds record, and is Hillman’s favorite song from that era. “I decided to cut it again because I wanted to sing with David [Crosby] and Herb [Pederson], two great tenors,” Hillman says. “David just loves Herb’s singing, and at 75 years old, David is still a powerful singer — one of the best I’ve ever worked with or been around.”

“Here She Comes Again” was co-written by Chris Hillman with Roger McGuinn, but heretofore only appeared on a live album from The Byrds in Australia. “She Don’t Care About Time” was a Gene Clark tune, and was overlooked as the B-side to the super hit “Turn! Turn! Turn!” The album also includes a reworking of “Old John Robertson” into “New Old John Robertson,” a rendition of The Everly Brothers’ Walk Right Back,” and Tom Petty’s “Wildflowers” among other selections.

“I did everything I felt was right in the moment,” Hillman says about the new album. “I did my very best. That’s all any of us can do.” 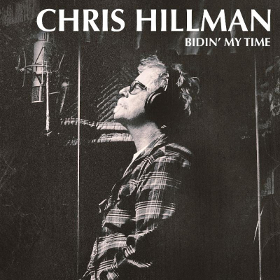