What Attendees Can Expect at Inaugural Mile 0 Fest 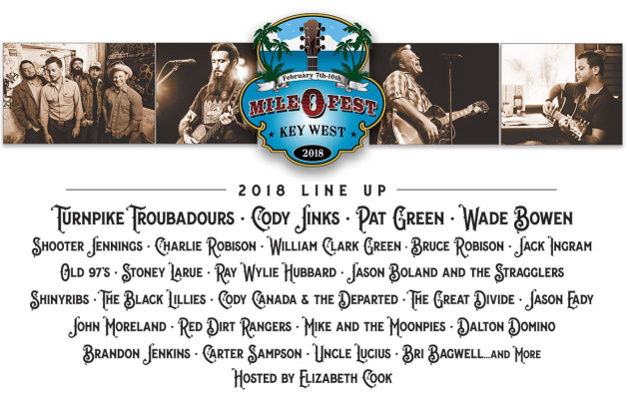 A brand new music festival in the Texas Music scene recently popped up called Mile 0 Fest, scheduled to occur in Key West, Florida February 7th – 11th 2018 at the new Truman Waterfront Park Amphitheatre. With an incredible lineup including headliners Cody Jinks and the Turnpike Troubadours, and an undercard of acts still yet to be announced, the event has been creating tremendous buzz as a contender for being one of those annual destination events in Texas music similar to Larry Joe Taylor Fest and The Music Fest in Steamboat Springs, Colorado.

But first year festivals can make some fans skittish, especially in the post Fyre Festival world, and especially since Mile 0 Fest is asking a handsome amount for tickets ($275 to start, $325 after pre-sale), and Key West is quite a remote place to travel to. So Saving Country Music reached out to the promoters from the recently-formed OhWook! Productions to see what’s planned for Mile 0 Fest, and try and to answer some concerns and for those diehard Texas Music fans who may be sitting on the fence.

“We have been to Key West a couple dozen times. We’ve done feasibility studies over 16 months now, seeing if this was the right place. We have an on island partner who’s done one of the larger events, one of the more successful events on the island in the last 26 years. We’ve partnered with concierge companies and hotel partners, and transpiration partners. From a logistical standpoint, I think we have a pretty fantastic plan. Is it easy to pull off, bringing people so far to an island, they’ve never been to? No. But it’s been very carefully thought out and planned.”

“One thing to remember about Key West is it’s a small town. People don’t think about it as a small town, but it is. We’ve got a good relationship with the Mayor, understanding that no matter how good you are, if the city doesn’t like you, they can make things very difficult. So we’ve taken caution and been very intentional.”

Mile 0 Fest says they will cap off ticket sales at about 3,500 people so that everyone can fit in the Truman Amphitheatre at once, even though other events will be occurring on the island in smaller locations that attendees can come and go to. The Truman Amphitheatre isn’t scheduled to be finished until October, but a couple of events are scheduled before Mile 0 Fest to hopefully work out the kinks before they open their gates. Last Friday (8-25) on their first day of sales, the fest sold completely out of their Platinum and Gold-level VIP packages. Though most of the sales were from Texas, 28 separate states were represented in the sales, and a surprising amount of local Florida residents purchased tickets. So despite steep prices, people are stepping up for a chance to see Texas music in a Florida paradise.

One concern raised by potential attendees is where to stay. Key West is a 7 1/2 sq. mile island with limited lodging infrastructure, especially in February when Key West is in peak season. Staying in Key West can be an expensive proposition even when there aren’t some 3,500 Texas Music fans flocking to the island. But Oh Wook! Productions has put together a fully concierged experience where a specific place to stay will be curated for attendees, if they choose to go that route. Attendees put down a deposit and tell the concierge how many people will be in their party and where they would like to stay (on the water, near the site, etc.), and the rest is handled for them.

“One component we didn’t have the capacity to handle in house was the accommodations part,” says Kyle Carter. “Although it’s a 7 1/2 sq. mile island, there are thousands of unique properties, from hotels to hostels, to condos, to vacation rentals. So we partnered with people on the island. These people know the island. We could have never gotten that without partnering. Every property that’s available on the island is going to be concierged to no end for them.”

Attendees can also just pay for a General Admission ticket and figure out accommodations on their own. Often people planning vacations to Key West will stay on adjacent or nearby keys (islands), and commute to Key West. This is a way to save a little money. Camping is also available in the area, including on Sugarloaf Key, Big Pine Key, Marathon Key, and other places in the island chain, and is another affordability option. Some people rent houseboats and sailboats to stay in. And though the nearest major airport is Miami, one unique aspect about the Florida Keys is you’re in the tropics, but you can drive there.

Another concern for fans—and a common one for Texas country events—is why more women weren’t included on the initial, main stage lineup.

“It’s not lost on us,” says Kyle Carter. “We certainly think that there are a great group of women that deserve to be here, and that will be at this show. We wish it was easier [to book women artists]. One thing that we can do is to be aware of it, and do our very dead level best to address it, and to bring those ladies on. Obviously if you look at the main stage lineup it’s not heavily loaded with ladies. But of course we’ve got Elizabeth Cook, we’ve got Carter Sampson who’s an incredible Oklahoma gal who’s traveling in Europe right now and making some real waves, and we have Bri Bagwell.”

Kyle Carter says to expect to see more women as lineup additions continue to be announced, as well as the names of more up-and-coming artists.

“We wanted to get the buzz out with the main stage. That was the goal. We’ll be sharing a whole bunch of folks that we still think are fantastic and emerging, and in a few years they’ll be on the main stage.”

“We want to make sure that people see our vision,” Carter continues. “The #1 thing that we see in this scene is that it has outgrown its original boundaries. And I think the response we’ve gotten over the last few weeks and with the initial sales speaks to that.”

Expect more performers to be announced in the coming weeks.