What Does Florida Georgia Line’s Brian Kelley Actually Do?

Pop country duo Florida-Georgia Line is the king of Summer 2013 so far with their super-hit “Cruise” dominating the country music charts. But the question that often comes up about the duo is what exactly does the short, blond-haired Brian Kelley do in the band? The longer-haired Tyler Hubbard seems to be the only voice you hear prominently in the vocal mix, and though Brian Kelley is commonly seen holding a guitar, he doesn’t appear to be handling any of the guitar solos, or really fulfilling any significant function of the Florida Georgia Line sound.

Because country music award shows break down accolades according to solo performers, duo, and groups, country music’s major labels will many times formulate or aggressively promote an act to take advantage of a weak category in hopes they will garner more attention. It may be Big Machine Record’s plan with Florida-Georgia Line to take advantage of the openings that emerged in the duo category with the departure of Brooks & Dunn, and the hiatuses of Sugarland and The Civil Wars by pushing the Florida-Georgia Line duo instead of Tyler Hubbard solo for example. Like Teller of Penn and Teller, Brian Kelley is just sort of “there” to qualify for the duo distinction.

But Saving Country Music has discovered that Brian Kelley actually does have some responsibilities in the duo. As you may or may not know, Saving Country Music has moles planted throughout mainstream country’s vast industrial complex, reporting back critical information and insightful data on a daily basis. One such mole, at the risk of life and limb we might add, smuggled the daily checklist sheet that Brian Kelley must fill out per Big Machine’s requirements. The document is quite a revealing window into the actual functions and responsibilities of Florida Georgia Line’s Brian Kelley.

The actual smuggled document (transcribed below): 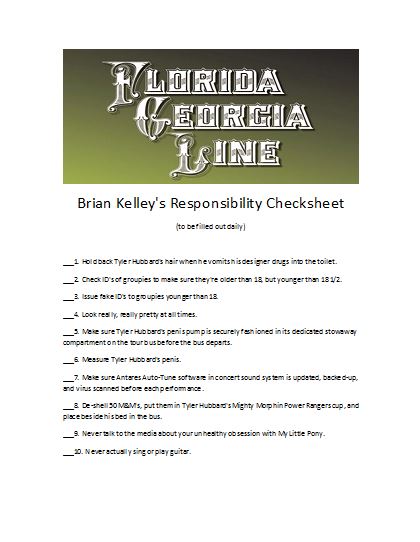 __ 1. Hold back Tyler Hubbard’s hair when he vomits his designer drugs into the toilet.

__ 5. Make sure Tyler Hubbard’s penis pump is securely fashioned in its dedicated stowaway compartment on the tour bus before the bus departs.

__ 7. Make sure Antares Auto-Tune software in concert sound system is updated, backed-up, and virus scanned before each performance.

__ 8. De-shell 50 M&M’s, put them in Tyler Hubbard’s Mighty Morphin Power Rangers cup, and place beside his bed in the bus.

__ 9. Never talk to the media about your unhealthy obsession with My Little Pony.