What Dumbasses Thought Bringing Back ‘American Idol’ Was a Good Idea? 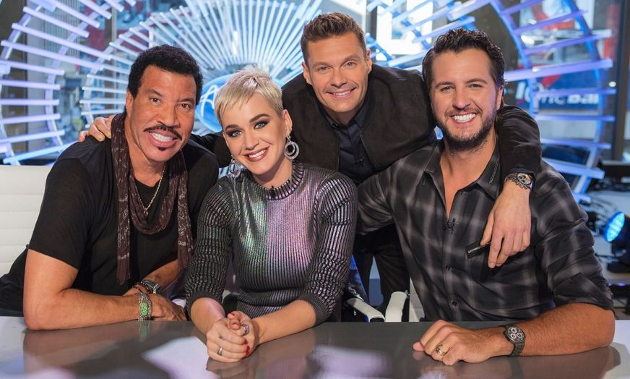 “Okay Luke, straighten your back more, and show off those pearlies you spent $7,000 whitening. Ryan, grab Luke and Lionel around the shoulders like they’re attractive young subordinates you’re looking to make time with. Katy, crook your head to one side so you look more endearing than an ultra-rich and out-of-touch superstar elitist who is kicking nuns out of their convent to build a luxury home. And Lionel, let’s just hope your face doesn’t fall off before the finale this summer…

I want to know who was the utter dumbass that in any way thought bringing back the tired old warhorse that is American Idol was a good idea. This is tantamount to holding out hope that Mike Tyson can still make a comeback to contend for World Heavyweight Champion. Even a shitbag blogger that pays scant attention to the reality singing competition industry or network television in general could merely sniff at the numbers surrounding the previous incarnation of American Idol, and could confidently go on record saying there was no way this would work, and still be more right than television executives with 8-figure salaries slinging around millions upon millions of dollars, ignoring every single sign that America no longer wants this mess.

They canceled American Idol in the first place because the franchise had proven so far beyond any reasonable doubt that it had completely run its course and was unable to be resuscitated regardless of who the judges were, regardless of any new set redesigns, or whatever other sizzle reel splashes they used to lie to themselves that the show could still somehow sustain. American Idol finished its 14th season an incredible $398 million in debt and in the ratings toilet. That’s why the 15th season had to be the last one.

But for some ungodly reason, perhaps being gluttons of punishment, they decided to bring it back yet again. Even comparing it to the terrible numbers for the franchise’s final season on FOX, this new ABC reboot is a bloodbath. The debut episode, even with all the hoopla and dough spent to promote it, dropped 23% in viewership compared to the debut episode on FOX for the show’s final season, which was already gasping for life. Now that American Idol is regularly going up against The Voice on Monday nights, it’s getting torched, giving up some 3 million viewers to the NBC show last week.

And now it’s time for everyone else to be the fall guy except the executives that ignored every single sign that this reboot would fail. Granted, Luke Bryan is a stiff, and that’s the reason the ACM Awards made the smart decision to fire him as the host of the awards in April. Lionel Richie’s got a big bag of nothing. Ryan Seacrest is fighting off a sex scandal, and Katy Perry’s out there kissing virgins and pushing around nuns to the point where they’re collapsing and dying in court and creating social media uproars. But trust me folks, these are all scapegoats. The real reason for the ratings malaise here is that American Idol has long since proven it’s run its course. If anything, controversy should breed ratings. But what’s happening here is people just don’t freaking care.

Look, whatever you think about American Idol, admit that it had a good run back in its day. It was a ratings hog for years, and launched some massive superstars such as Kelly Clarkson and Carrie Underwood. But nothing lasts forever, even the greatest television concepts of all time. People just get tired of them, and something comes along that’s better. And that’s okay. Maybe American Idol could have been rebooted in the future, but folks needed a good half decade, maybe a decade away from it, maybe to the point where nostalgia kicked in, which is the reason all these 90’s television and movie reboots are doing so well. But this was way too soon.

For the love of God, put this dying dog out of its misery. Or, do the one thing that could revitalize it, which is to bring an asshole judge on board. Because America is far beyond satiated with singing competitions, especially ones that have a proven track record of being completely unable to launch any true “Idol” over the last many years. What they’re hungry for is brutal honesty and criticism, which is what Simon Cowell brought to the table, and the whole reason American Idol was ever intriguing in the first place. It’s also why America’s Got Talent‘s finale (where Cowell is now) hit a 6-year high last season.

The only saving grace here is this American Idol reboot has relegated Luke Bryan to what’s basically a desk job. But man, I almost feel sorry for him and everyone else who now has to play this hand out for the next many months. Yes, some people are still watching, but it hardly justifies the massive budgetary resources this behemoth eats on a weekly basis. American Idol must hit grand slams in the ratings, or millions are lost.

Just like the malaise we’re seeing in music and movies, attempting to reboot American Idol is the sign of a lack of new ideas or originality. America has moved on from American Idol, and unless it’s willing to dramatically adapt to the times, or be true to itself and understand hard criticism is part of what made it so intriguing originally, it will be like an anchor on ABC and its cast.