What In God’s Name Is Going On In Tim McGraw’s “Way Down”?

Trigger Down with Pop Country 110 Comments 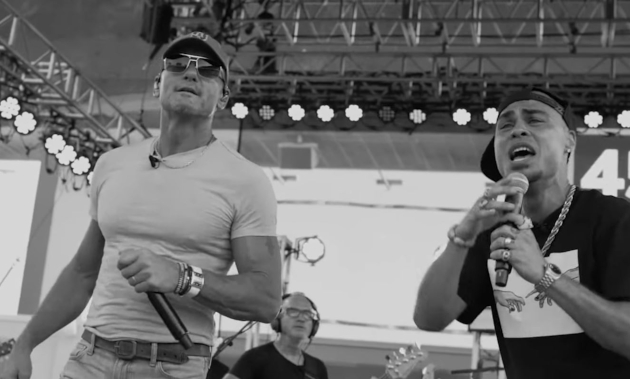 It’s never too late to revitalize your career, or to train wreck it. Tim McGraw saw all the hubbub being made over “Old Town Road” and decided he could mumble rap about pure nonsense and call it country too. Bad for him though, none of the Gen Z’ers with their Tik-Tok apps know or care who Tim McGraw is, and now he’s exposed himself as just another old white dude looking like an idiot with his 52-year-old hip-hop gesticulations in a shirt two sizes too small. Faith Hill should make McGraw’s gym rat ass sleep on the couch for six weeks for releasing this mess.

“Way Down” featuring Shy Carter is not exactly a new song. McGraw released it 4 1/2 months ago. But few paid attention, and for good reason. It’s aggressively forgettable, and so obviously pandering to the pattern of country rap songs that really aren’t country or rap, and really don’t present a new pattern at all despite the way they’re presented in the media, there was no reason to react to it beyond letting off a good belly laugh 30 seconds in. If you were a McGraw fan, you just wanted to forget it.

But even as a pseudo country rap ditty, “Way Down” lacks the earworm infectiousness or cool factor that may fry traditional country fans as it flies up the charts by finding traction with 15-year-olds aping to it like morons for one another on their Instagram feeds. The paltry numbers “Way Down” has accrued after ample time to capture the Zeitgeist verify this harsh prognosis.

But that didn’t stop from Tim McGraw from electing to perform the song as part of the run up to Monday night’s (1-13) College Football Playoff between Clemson and LSU. A native of Louisiana, and needing an excuse to jump start his country rap mishap, McGraw he’d take the stage and do his worst with Shy Carter in tow. Sadly for Tim though, the performance had a sharply different result than the one intended. Shocked and appalled college football fans took to social media en masse to blow raspberries McGraw’s way and wonder just what the hell this old white dude trying to rap was doing on their screens. You mean this was the guy who sang “Don’t Take The Girl” and “Live Like You Were Dying”?

It’s not like Tim McGraw hasn’t made his fair share of missteps in his career. “Truck Yeah,” anyone? But over the past few years he’s also been a guy who seemed to be willing to grow old with his music and try to help country find a way back to its heart and soul. His last record Damn Country Music was a hell of a success with three Top 5 singles, including the #1 “Humble and Kind” written by Lori McKenna that ended up winning the CMA and Grammy for Song of the Year. He also had the #3 hit “How I’ll Always Be” with the line, “I’m a little more ol’ Hank Williams than that trendy crap…”

Now Tim McGraw is tractor rapping, “I’m talkin’ way outside with the crickets and the dogs and the ye’haws, and the grandmas…”

Oh, and get a load of the innuendo embedded in these lines:

Is this just a blow job song disguised as a Southern anthem, Tim McGraw? These lines make Lil Nas X’s verses about booties and boobies feel Shakespearean. I can’t believe Craig Wiseman had a hand in writing this song with Shy Carter, who’s the rap kid with McGraw who performs the “spout” line.

Oh, and also announced on Monday, this Shy Carter kid has signed to Warner Music Nashville off the strength of writing aggressively shitty songs like “Way Down,” and others like Sugarland’s “Stuck Like Glue” that helped shutter their career, and Keith Urban’s worst song ever, “Never Coming Down” that wilted at radio. Way to reward mediocrity, assholes. Now we can have even more rap songs in country about getting head. I’m sure all the folks at Warner Nashville today are patting themselves on the back about how “inclusive” they’re being. But they’re just helping to make all popular music sound the same: shitty rap songs.

This was a bad, bad move, McGraw. You got lucky when “Way Down” was sequestered in obscurity and you could just shew it under the rug. Whipping it out in front of a national audience just proved what a national embarrassment much of country music has become, and why most of the sports world has jumped on the “What the hell has happened to country music?” bandwagon.

We’re better than this.