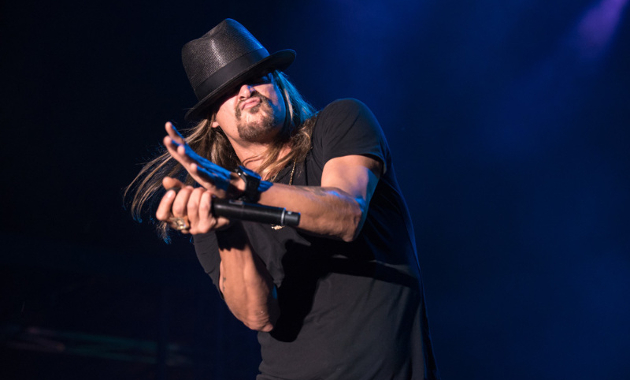 Kid Rock is the wet cigarette of music.

It’s not that the guy hasn’t accidentally stumbled into a few good songs over the years, and give the dude credit for name dropping country legends upon occasion back in his heyday and helping to make them cool again. He also took Hellbound Glory out on tour with him once, so there’s that. But even if you’re a fan of his, you have to recognize he’s a total scuzzball. He might be your scuzzball, but he’s a scuzzball nonetheless. That’s why you love him.

Shortly after being cleared by the Federal Elections Commission for any wrongdoing for his dumbass fake Senate election run that the idiot media was gullible enough to believe, Kid Rock went on Fox & Friends Friday morning (11-30) and had the audacity to call Joy Behar of The View a “bitch.” The context of the conversation had to do with PC culture, and the pervasiveness of the use of accusations of racism and homophobia against individuals simply if someone disagrees with them.

Generally speaking, Kid Rock is probably right on that point. PC culture has completely run amuck, and makes Tipper Gore’s PMRC and the Satanism scare of the 80’s look sedate. But Kid Rock’s also a pretty terrible point man against PC culture since he’s been a historic perpetrator of misogyny and cultural appropriation throughout his career. It’s sort of like Shania Twain out there flapping her gums about ageism affecting country radio. Of course there’s ageism on country radio, but there may not be any bigger benefactor of ageism in the history of country music than Shania Twain back in the day, putting dozens of country legends out to pasture with her pop country and leopard print. Now that her overproduced music isn’t getting played, all of a sudden she’s chosen to be a spokesperson. Please.

But I digress. After Kid Rock called Joy Behar a “bitch” on live television, he was removed as the grand marshal of the 65th Nashville Christmas Parade on Saturday (12-1). The mayor and city council members said they wouldn’t participate in the parade if Kid Rock continued as grand marshal, and he was edged out. There’s a lot of minutiae behind the story (that means trivial details, Kid Rock fans), like who actually sponsors the parade. It is done to benefit the Children’s Hospital at Vanderbilt, and there are a few big money backers, including a guy named Steve Smith, who owns Tootsie’s Orchid Lounge and other Nashville properties. He’s how Kid Rock got the spot in the first place. Now Steve Smith is threatening to sue the other sponsors.

But the big question is, why in the hell is Kid Rock being chosen as the grand marshal of a Nashville parade in the first place? What true ties does he have to Nashville, or to 2018, aside from having a stabbin’ cabin in the area to have extra-marital sex and smoke pot in? Nashville is full of celebrities who have specific ties to the city, and you choose Kid Rock? He was replaced by James Shaw, Jr., who was the guy who wrestled the gun away from a mass shooter at a Nashville Waffle House earlier this year, saving scores of lives. Now that is someone you should have as the grand marshal for a local parade, not some sponger who wants to be considered country now that the rock format has been killed off, partially due to rock rappers like Kid Rock. There was really an initial discussion between Kid Rock and James Shaw Jr., and Kid Rock won?

Kid Rock has been trying to grime his way into the Music City culture and Southern mindset for going on 20 years now, and making him the grand marshal of the local parade would have only helped to unjustly cement that. From playing loose with the idea that he was an illegitimate son of Hank Jr., to forcing himself on the bus of Hank Williams III with Pamela Anderson in tow to get in the face of Hank3 and tell him how he needs to be a better son, to releasing his last record Sweet Southern Sugar, and the single “Tennessee Mountain Top,” this guys got more Southern envy than a Saskatchewan snowbird.

Kid Rock is from Michigan, and no offense to that because The Hand has it’s own things to be proud of. To act like somehow Nashville owes anything to Kid Rock is ridiculous. We knew it was a bad sign when right beside the photos of Hank Williams Jr., Kris Kristofferson and others on the famous front of Tootsie’s Orchid Lounge, Kid Rock’s mug mysteriously appeared a few years ago. Then he somehow got a star on the Music City Walk of Fame. Nashville is right to resist Kid Rock’s name becoming synonymous with the city. Why isn’t Kid Rock trying to embed himself in Detroit’s music legacy and culture, which is quite strong, and is in need to advocacy and pride?

And while we’re on the subject of misappropriated culture, while running Kid Rock out of town, let’s do the same to his business partner Steve Smith, who has taken the critical cultural institution that is Tootsie’s Orchid Lounge, and turned it into a karaoke bar. Tootsie’s the Applebee’s of classic rock these days, nothing more than a receptacle for frat boys to throw up in, and for tourists to listen to Foreigner cover bands. This is the place Kris Kristofferson penned some of his greatest songs, and Willie Nelson once sold Patsy Cline’s husband on the idea of cutting “Crazy.” Now you’d almost rather go into the Blake Shelton-themed bar because at least it’s authentic to itself. Almost, that is. Plus, their jalapeno poppers are better.

And why does Kid Rock care so much about helming a damn parade anyway? The Kid Rock I know would give a middle finger salute to the Sesame Street float, then vandalize a Waffle House before taking a swan dive into a bunch of trailer park meth whores. Again, if you love Kid Rock, that’s why. Oh, but Kid Rock wanted his granddaughter to see him as grand marshal? (Yes, Kid Rock is a grandfather). Well how would he like it if someone called his granddaughter the b-word? But it’s not like Joy Behar doesn’t come with her own dubious amount of politically incorrect baggage, uttering numerous dumb things over the years, yet nobody’s out there trying to deplatform her. We should be able to go back to a time when we all understood that humans are flawed, and our emotions get the best of us upon occasion and we all say stupid things.

I can overlook Kid Rock—and Joy Behar for that matter—for saying stupid things, because they’re entertainers who’ve built their careers around being edgy. But Kid Rock still has no business marshaling a Nashville parade.

Seriously Kid Rock, just go away. Or at least back to Michigan where you belong.