What’s Next? Country and Folk Songs That Mention The Confederacy? 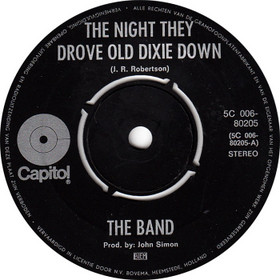 I can’t express to you how little desire I have to get into the center of the Confederate flag debate. It’s not even that I don’t have an opinion on it, it’s that the debate has become so contentious, reactionary, and polarized that I would feel stupid for participating. The debate has just become a forum now for stupidity and vitriol to breed, on both sides.

I do see a difference between flying the Confederate battle flag at state houses or other governmental properties, and the right for individuals to peaceably display it in their homes or in their private organizations. The precursor to the whole debate before the massacre in Charleston was a Supreme Court vote in favor of the State of Texas to not allow the Confederate Flag to be presented on state-manufactured license plates. The Supreme Court said since it wasn’t an individual’s expression, but a governmental emblem, they could limit what could and could not be displayed.

There may be nothing that symbolizes free speech more than unfurling a flag. And I understand that however misguided it might seem to some, the Confederate flag is seen as a symbol of racism to a segment of the American population. And if officials elected by the people, or judges appointed by representatives want to say that such symbols should not be a part of official state business, than that’s the business of those particular states and localities. As many Southerners like to point out, the Civil War was not just about slavery, but about state’s rights. So let those particular states decide what they want to do with the Confederate battle flag and their respective state institutions.

But the Confederate flag debate has spilled out into the greater culture, and now is looking to potentially affect the very fabric and foundations of Southern heritage. It’s not a stretch anymore to see its free speech-censoring mandibles reaching into the country music realm, and not just in a matter of weeks, months, or years, but hours at this rate. The way Florida solved the Confederate flag debate was by moving the flag from the state house to a museum. However now the Confederate flag isn’t the only cultural institution being targeted. Statues commemorating Confederate personalities, the museums that are supposed to be bipartisan safe havens for the preservation and display of Confederate material, and other such cornerstones of the Southern identity are now being debated about as to whether they should be demolished, and purged from the public consciousness in an effort to eradicate anything even remotely alluding to the Confederacy in culture.

In 1969, a Canadian songwriter named Robbie Robertson wrote, recorded, and released a song called “The Night They Drove Old Dixie Down” for the second, self-titled album from The Band. The song remained fairly obscure until the New York City-born progressive folk singer and well-known activist Joan Baez recorded a version and made it a Top 5 hit in 1971. The song has since been covered dozens of times by bands and artists from all around the country and world, and it’s seen as a stalwart of the American songbook. Why? Because the song embodies the sorrow and loss the South suffered at the defeat from Northern forces in The Civil War. It embodies the romance The Civil War encapsulated in its bloody and historic conflict.

But the song commiserates with the Southern identity in the the Civil War context. It mentions Robert E. Lee. The Band at one point even posed in Civil War uniforms. Would any of this be acceptable today, or would it be seen as garnering sympathies towards racist institutions?

And of course the examples of Confederate history embedded in country, folk, and Southern rock songs only just starts there. They are too numerous to list. And how about the traditional songs associated with The Confederacy like “Dixie”? As the cradle of American music, the South has always used song to preserve and honor its heritage, good and bad.

The Civil War happened, and the South lost. Atrocities occurred on both sides of the battlefield. Atlanta was burned to the ground, and simply from an economic standpoint, one can make the case the South has still yet to recover from the defeat. But it happened, and how are we to learn from the lessons of The Civil War, especially the South’s misnomers on equality, if we eradicate any notions of the Confederacy’s existence?

This guy that walked into a black church in Charleston and killed nine people? Fuck that guy. And proponents of the Confederate flag should be angry at him for using it as a symbol of racism more than anyone else. But let’s not over-react to this atrocity by completely purging elements important to the Southern culture out of society. The South, and especially people who identify with Confederate culture have been lampooned more than any other segment in American society since the Civil War, and if you question that, just go watch a promo for the new Joe Dirt 2 movie.

And when people have their culture ripped from them, lampooned, stomped on, and admonished, they lose their identity as people, use drugs and violence and foreign cultures to fill that void, and the homogenization of culture prevails. And among other ill’s, the result is the really really bad music that prevails in popular Southern culture today. Yes, the racist elements should be purged, but we also shouldn’t throw the Southern baby out with the Confederate bath water.

On April 10th, 1865—the day after Robert E. Lee surrendered to General Ulysses S.Grant at Appomattox—President Lincoln came out on the streets of Washington DC to address a throng of roughly 3,000 people who had assembled to celebrate the news. Lincoln had no prepared statement, but saw that there was a band that had joined the throng and requested they play “Dixie” before they played “Yankee Doodle.” “I have always thought `Dixie’ one of the best tunes I have ever heard,” Lincoln said.

Dixie, Joan Baez, The Band, The Night They Drove Old Dixie Down