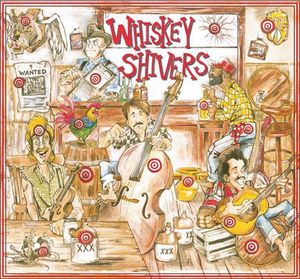 One of the hottest and most entertaining primordial string band outfits on the planet right now is the Austin-based Whiskey Shivers, and patient fans who’ve been waiting for a defining album from a band whose been tearing it up live for years are finally getting their wish. Produced by noteworthy Americana artist Robert Ellis, Whiskey Shivers will be releasing their self-titled LP September 23rd.

“Whiskey Shivers isn’t just the five of us on stage, it’s everybody in the room,” says Whiskey Shivers frontman and fiddle player Bobby Fitzgerald. “We try to bring everybody into the moment and get them to realize there’s no wall between us and the crowd. We’re all in this together, and we’re all here to have a good time. We’ll do our best to facilitate it, but it takes all of us to make it happen. When you start to feel that, you can’t help but feel a little attachment and become invested in the show. You realize, ‘Oh, I’m here to have good time too!'”

With a live show that sets crowds on fire, the Whiskey Shivers have found themselves booked at some of the biggest festivals in the US, including ACL Fest in their back yard, and California’s Stagecoach Festival, sharing the same stage with artists like Jason Isbell and Shovels & Rope. They’re now scheduled to play the Americana Music Festival right before the album release in September, and have a short tour with Th’ Legendary Shack Shakers coming up.

Though known somewhat as a party band that plays a lot of bluegrass covers, their new self-titled LP finds the five-piece delving into deeper material and taking up the songwriting role themselves. Producer Robert Ellis was the perfect man to help facilitate that maturing in the band’s development.

“He’s a really comfortable guy, and we really respect his songwriting,” says upright bass player Andrew VanVoorhees. “When it came time to say who we wanted to shape this thing, Robert was the first on the list. He’s really taking our songwriting and musicianship to a new level. Robert actually put it pretty well. He said, ‘We’re making an album, not making a recording.’ We put out three recordings that were just songs we were excited about, but we never tried too hard to make them representative of the live shows. Or if we tried, we just fell short.”

“We’re all going through shit all the time. We recognize that life’s tough,” Bobby Fitzgerald says. “We try to write songs that recognize the hard times that we all share. When you put your problems out on the table where everyone can see them, it doesn’t really have the same power over you any more, and you can start to acknowledge it, separate yourself from it, and go on with your life. Try to take a night where you can forget about your problems and just feel good, have a good time with your friends, make new friends, and be part of a little community for a while.”