Fans of Flint, Michigan’s rambunctious throwback wild-eyed honky tonker Whitey Morgan and his backing band The 78’s have been waiting half a decade for a new studio album, and their country music prayers are about to be answered, or at least they will be on May 19th when Whitey Morgan releases his latest record Sonic Ranch. 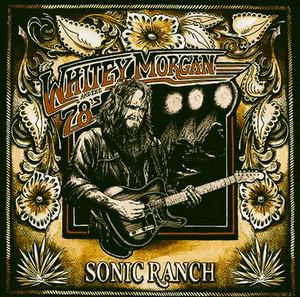 Named for the spot just outside of El Paso, TX where the project was recorded, Sonic Ranch includes ten new tracks. And like all of Whitey’s records, there’s a few covers given the Whitey Morgan treatment.

“It’s like no other studio I’ve ever been in or even heard about,” Whitey says of the Sonic Ranch. “They have three live rooms and three control rooms, all on a 3,000-acre property. They have accommodations for I think up to 30 or 40 people in different haciendas. They have a staff that does your laundry and cooks every meal for you. My management is friends with the owners. I hate the studio, but I didn’t hate this studio. I didn’t feel like I was in this studio because I could leave and walk out the studio and be forty feet to my front door and it’s just me; I have my own little hotel room right there. Most studios you can’t do that. You’re stuck in there. You can go out to the parking lot and sit in the van.”

“Creativity is squashed by studios that don’t have that kind of environment,” Whitey continues. “I almost don’t want to tell anyone about it because I don’t need any more musicians recording there than there already are. And the equipment is unreal. Not just the recording equipment, they have tele’s galore, amps, and everything. It’s unreal. Anything you want, they have it. And it’s all because a guy that has money is passionate about music and recording. To him, it’s the ultimate dream to have musicians come hang out at his place. He’s a great dude.”

The Sonic Ranch is owned by Tony Rancich and was originally opened in 1989. Centered around an old Spanish hacienda built in the 1930’s, a total of five complete studios can be found on the 1,700-acre pecan orchard right on the Rio Grande.

After a protracted period of no new Whitey Morgan music, Sonic Ranch will mark Whitey’s third release in the last six months. Born, Raised, & LIVE From Flint was released in December via his former label Bloodshot Records, and an acoustic record called Grandpa’s Guitar was released just a few weeks later.

One of the songs included on Sonic Ranch is a Bobby Bare cover called “That’s How I Got To Memphis.”

“We put that one down and I’m really excited about that tune. It’s a little different than my kind of sound. It’s kind of got that early 80’s era sound; it’s got that minor chord in there. It’s slick. I’m trying to move on without moving too far. I know what everybody wants, they want another classic, Waylon-ish sounding album. This one’s going to be a little different, but it’s not going to be that different.”

Some of the other covers from the album include Townes Van Zandt’s “Waitin’ ‘Round To Die” and Scott H. Biram’s “Still Drunk, Still Crazy, Still Blue.”

As for the producer Whitey Morgan worked with, “His name is Ryan Hewitt. He’s one of those guys who’s been in a lot of sessions where he was either mixing or engineering or co-producing. He mixed a lot of the Johnny Cash stuff with Rick Rubin, he did The Avett Brothers last three albums. I’ve only ever produced my shit myself. Maybe five years ago I would have been more stubborn. But now, when he’d open his mouth about something, instead of just automatically being like “No, it’s got to be my way,” I think about it from someone else’s point of view and most of the time he’s right. We worked really well together.”

Some fans who helped with Whitey’s crowd funding campaign have already begun to receive the record. As always, Whitey Morgan & The 78’s are hitting the road hard and heavy, including some upcoming dates with Bob Seger and Cody Jinks.