Why I Have Mixed Feelings About The Born & Raised Festival 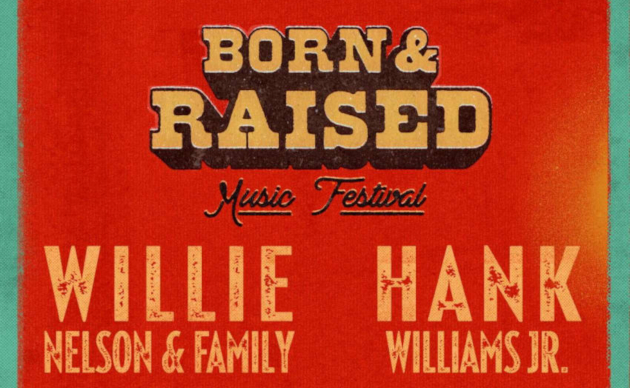 Jaws dropped, and the calendars of true country fans got shuffled on Wednesday morning when the lineup for the inaugural Born & Raised Music Festival was announced for June 5th, 6th, and 7th in Pryor, Oklahoma, just north and west of Tulsa. With Willie Nelson and Hank Williams Jr. headlining the event, and an incredible undercard that includes Jamey Johnson, Blackberry Smoke, Margo Price, and Mike & The Moonpies (see full lineup below), it immediately rocketed to the top of the festival food chain in middle America when it comes to music in the independent, traditional, Southern rock, and Outlaw country realm.

“Born & Raised Music Festival came to life with an idea to celebrate Outlaw, Texas, and Red Dirt country music. To us, there is no better place to have it than deep in the heart of Oklahoma, the birthplace of Red Dirt,” says festival producer Mike DuCharme. “These genres are showing a resurgence right now on the music scene. People want to celebrate their roots and listen to music that reminds them where they were born and raised. When looking to kick off year one of this event we could think of nobody better than Willie Nelson and Hank Williams Jr. to headline each day.”

Undoubtedly, the lineup is impressive, fans in the region and beyond are in for a real treat, and it’s a great opportunity for some bands to be able to play a festival like this right in the heart of Red Dirt country. Yet at the risk of being a buzzkill, I would be lying if I didn’t say that my heart sank when I saw the event was being promoted by mega festival concern, AEG.

I get it, as a music fan, you could give a shit who the money men are behind an event, and I’m sure there will be ample comments from people saying the same thing who have no desire to read a 15 paragraph article about anything. You just want to have a good time, and the last thing I want to do is rain on anyone’s parade. But this event is the absolute last thing the local and regional independent promoters in this area or anyone else needed to happen in a time of major strain and contraction.

Less than two weeks ago, Saving Country Music reported on the cancellation of the Tumbleweed Festival for 2020, which would have transpired the week before Born & Raised, and in the same region south of Kansas City. “It is with heavy hearts that we are announcing Tumbleweed 2020 has officially been canceled,” the promoter Borda Productions said in a statement on January 24th. “To maintain the integrity of the Tumbleweed experience, we were unable to obtain the proper artists to meet the expectations of our fans.”

Why couldn’t they obtain the proper artists? Because a massive company like AEG can move into the region, throw mad money around, take a loss for five years if necessary just to get their footprint in place, and enact radius clauses on all the artists they book that disallow them from performing at festivals like Tumbleweed. To take that concern even further, basically Born & Raised is Tumbleweed, just with deeper pockets, and less of an emphasis on the independent artists that depend on local and regional festivals for their initial opportunities in front of bigger audiences. Looking at the lineup, AEG took the business concept of Tumbleweed and other regional promoters, and ran with it. AEG wants to bankrupt or buy out those promoters so they can be the big dog.

“It’s great that AEG acknowledges the fanbase that exists in the authentic country music scene,” Borda Productions said in a statement to Saving Country Music on Wednesday. “As an independent festival in 2016, Tumbleweed identified that same potential surge of fan support and worked to build a grass-roots festival with the fans in the forefront of every decision we made. We did the hard work of establishing trusting relationships with fan groups, artists and management companies to organize the energy surrounding the authentic country music scene. In 2019, we regained momentum and the festival had the best year of five years in it. When we headlined [Cody] Jinks, he was selling 750 tickets in big cities. Childers was doing 500 cap rooms. We’ve hosted hundreds of national musicians who receive no love from AEG or ‘big business’. The authentic/independent music scene had a home with Tumbleweed and we’ll look to regain that status in 2021.”

And this isn’t just about the greater Oklahoma/Kansas/Missouri region where Born & Raised will draw heavily from, along with being a destination festival for fans from all around the United States and beyond. AEG getting into the Texas/Red Dirt scene will only jack talent prices up for local and regional promoters all across the country, like the Wild Hare Country Festival near Portland, OR, which also announced they will be unable to produce a 2020 festival, and specifically because of the skyrocketing prices for talent.

“There is an industry perception that festivals are ‘cash cows,’ and the booking fees that agencies quote reflect that,” says Jason Fellman of Wild Hare. “Often times, the cost to book an act is 3-5 times (or more) what they would earn at a one-off ticketed show in the same market. It’s a bit of a catch 22 because on the one hand, it’s the artists that MAKE the festival! On the other hand, it’s not economically sustainable if the fees aren’t aligned with the realities of the market.”

However huge corporations such as AEG don’t have to deal with these concerns like local and regional promoters, and are specifically the reason all festivals are seen as “cash cows.” AEG can absorb the talent costs for an inaugural event just to establish a foothold in a region, while artists and bands often want to get on the good side of these huge promoters to put themselves in line for future opportunities. It’s not the fault of these artists and bands, or their booking agents who are simply trying to get the most money they can. But rarely does anyone look at the bigger picture of what’s going on behind-the-scenes in the festival space, which is the monopolization of it by LiveNation and AEG. Meanwhile if Born & Raised never turns a profit, they’ll just cancel it. But the damage is already done, because the other festivals had to cancel because of Born & Raised, leaving the area underserved.

There’s another problem with the Born & Raised festival, and that’s the lack of women on the lineup. Only two of the 25 announced acts are female. Ironically though, many of the same Twitter trolls who have doggedly hounded festivals such as Tumbleweed, Mile 0 Fest, and others are curiously mute on Born & Raised, and outlets that have pledged to not promote festivals with such lopsided gender disparities such as Rolling Stone Country are completely on board with the festival. Why is that? First, they want access due to the festivals incredible roster. Second, Margo Price is on board, which AEG is betting on being their trump card to deflect any criticism about this issue.

Margo Price has been one of the most outspoken critics of gender disparity in country music, and specifically with festivals. On May 15th, 2019, she tweeted, “I just turned down playing a pretty reputable festival this summer not only because their offer was a joke but because there was only ONE other woman on the line up. Come on people, we can do better. 13 men and 1 woman. SMDH … Oh and everyone was white too.”

The gender disparity for Born & Raised is even worse, while all the performers are white as well. Meanwhile Tumbleweed had five female performers out of 23 total acts, yet still got dragged in 2019 for not having enough women, as did Mile 0 Fest and others.

What we’re seeing with Born & Raised dovetails with the issues many local and regional promoters face when attempting to book women acts. While some want to characterize the issue as solely being about old white men wanting to exclude women from these events, when you talk to the promoters themselves, they are frustrated about the issue as well, often because the few top-level female acts in independent country such as Margo Price turn them down, or demand significantly more money than their live draw. AEG can afford to pay Margo Price an inflated rate. Local promoters can’t. And when Margo Price and other women refuse to play, it exacerbates the issue, it doesn’t help solve it. Then Margo Price and others take to social media to drag these festivals, making it almost more advantageous for local promoters to not make offers to performers like Margo Price at all as opposed to having activist Stans and artists attacking them on Twitter.

In fairness, this difficulty in booking women is probably one of the reasons Born & Raised only has two women on their lineup. The truth of the matter is, there’s an inventory issue when it comes to women in country, especially in the Texas/Red Dirt scene, as well as economic concerns that often the people who criticize festivals for not having enough women don’t want to address. Last year, the LakeShake Festival earned high praise for putting on a woman-only day during the event. On Monday, LakeShake announced the festival would be canceled for 2020. It is promoted by LiveNation, who did not give a reason for the cancellation.

All that said, at the end of the day, it’s still all about the music, and Born & Raised has definitely assembled an excellent lineup. Music fans should attend completely guilt free, as should the performers. With their experience in this space, there is no doubt AEG will put on an excellent event, and it also is worth pointing out that it will be located on the same grounds of the annual Rocklahoma Festival, which is owned by Dave and Sharon Giencke, who are big supporters of the regional Oklahoma music scene, meaning they will benefit from this event as well.

It’s also a positive sign that big promotional companies are now recognizing the major economic power of traditional country, Southern rock, and Texas/Red Dirt. The fact that AEG wants to get in this space means these artists who call their own shots are now competing with the big boys (and girls) in the mainstream space more than ever.

But we also need to make sure our eyes are wide open, the greater economic impacts on up-and-coming bands that a booking concern like AEG would never touch are addressed, and the local and regional promoters who also often work hand in hand with local venues to bring good music talent to your town all year don’t get squeezed out of business by huge companies like AEG and LiveNation, which is already happening to the tune of many canceled festivals, and many sold and shuttered venues.

In short, if you want to go to Born & Raised, go. And guilt free. It’s an amazing lineup. And even though I disavowed going to such corporate-promoted events years ago, perhaps I’ll even make an exception. But I had to say my peace. 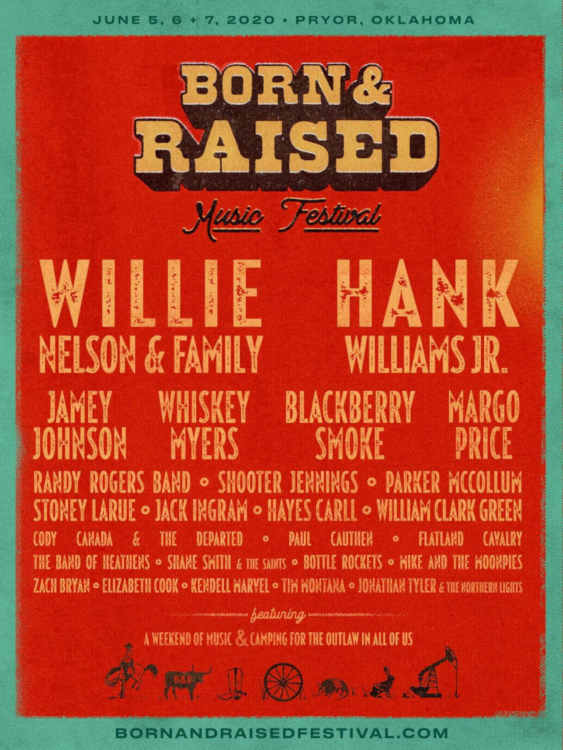