Why The Country HOF Should Own The Grand Ole Opry 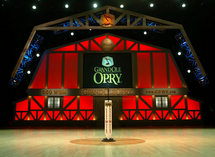 Let me start this off by admitting this is somewhat of a hairbrained idea, and that the chances of it actually happening are slim. Talking about the Country Music Hall of Fame buying The Grand Ole Opry is the music version of fantasy football. However what makes the idea interesting is how perfect it would be, and it is nurtured along by the ever so slight, but nonetheless present possibility that it could actually happen, or happen in some partial measure, some day.

Why Gaylord is a Bad Fit for The Opry, and The Country Music HOF is a Good One

The problem with The Grand Ole Opry is that it is owned by a public company, Gaylord Entertainment, who is beholden to shareholders and profit margins before the Grand Ole Opry’s charter of preserving the roots and traditions of country music. Gaylord’s ownership fits in the classic modern dilemma for the American investor. With money tied up into investments, we all demand not only profit, but growth from our companies. To achieve this profit and growth, corporations like Gaylord must must deliver less and take more, ostensibly robbing investors of what they desire to eventually be repaid back in dividends and stock appreciation.

The Country Music Hall of Fame on the other hand is a private, not-for-profit institution that subsists on admission fees to The Hall and special events, retail sales in its gift shop and cafe, renting of its spaces, and donations. The Country HOF has no need to show profit or growth, only a balanced, sustainable budget, insulating it from trend chasing, austere cost cutting campaigns, and other corporate bureaucratic trappings of public entities.

The fundamental problem with The Grand Ole Opry is it was built on a business model constructed in the early 20th Century, when radio was the dominant media, and real estate and talent were cheap. The promise of The Opry to its performers has always been that if they give to The Opry during the heyday of their career, The Opry will be there to support them in the twilight of their career. But unfortunately this handshake-like, loose relationship does not translate to the modern, HR-style corporate policies that Gaylord must operate under. This has resulted in lawsuits and bad publicity like in the Stonewall Jackson age discrimination case and others.

Under Gaylord ownership, The Grand Ole Opry can only worry about the preservation of country music history and values in ways that also can fit in Gaylord’s business model and turn profit and growth. Part of Gaylord’s management structure and executives do not have backgrounds in country music, rendering them uninformed and/or out-of-touch with the public demands of the unique Opry institution.

What is The Grand Ole Opry?

Would Gaylord Entertainment be sellers?

Over the last 15 years, Gaylord Entertainment has dramatically shifted their business model from a broadcast and entertainment company, to a hospitality resort-holdings, real estate-based model. Gaylord used to own over 10 local television stations, as well as CMT (Country Music Television), TNN (The Nashville Network), WKY Radio in Oklahoma City, The Daily Oklahoman newspaper, and the massive Acuff-Rose music publishing firm (now Sony ATV), and other broadcasting and entertainment assets. All of these have now been sold off, with The Opry’s WSM the only remaining broadcasting arm of the business.

Today Gaylord’s core business is its 5 resorts and convention centers in Nashville, Orlando, Grapevine, TX (Dallas), National Harbor, MD, and Denver (scheduled to open 2014), as well as other real estate assets including the Wildhorse Saloon in downtown Nashville, and the General Jackson riverboat. The way The Grand Ole Opry fits into Gaylord’s structure is not as a country music institution or a broadcast entity, but as a tourist destination.

If you take away the real estate and tourist component from The Grand Ole Opry, the Opry franchise sticks out like a sore thumb in the current Gaylord Entertainment business structure. One of the reasons Gaylord may be reluctant to sell or otherwise part with its Grand Ole Opry assets is because of the very lucrative naming rights that come with the Opry/WSM franchise. “The Grand Ole Opry” is one of the most powerful brands in the city of Nashville, and is tied to their Opryland Resort, and was previously-tied to the Gaylord-owned Opryland USA theme park that closed in 1997 that later became the Opry Mills shopping mall. A new theme park partnering Gaylord with Dolly Parton is now scheduled to open in 2014 adjacent to the Opryland Resort.

Why Would The Country HOF Be Buyers?

As an entity whose purpose is to preserve the roots and history of country music, and one that is not beholden to public shareholders or profitability, the Country Music Hall of Fame is a perfect fit for The Grand Ole Opry. Furthermore, whether the Country HOF wants to be a buyer, they may have no choice but to be a buyer to preserve The Grand Ole Opry as an institution long term. Radio, especially country radio, continues to be a dwindling asset with declining revenues and listeners. The sale of WSM and The Grand Ole Opry as a radio show to an entity that can maintain the institution on a not-for-profit basis may be the only way long-term for the asset of the Grand Ole Opry radio show to be sustained.

There is precedent for the Hall of Fame purchasing or taking control of satellite properties or assets, as well as partnering with other entities. The Hall of Fame is already working closely with the Nashville Convention Center being constructed across the street from it, and eventually the two buildings will be joined with the Hall of Fame expanding into a collaborative use of space with the Convention Center. Another great example is the old RCA Studio B that is now part of the Hall of Fame despite being located 1 1/2 miles west, on Music Row. The Hall currently shuttles museum attendees back and forth to the studio’s location as part of their tour.

Comparatively the Ryman Auditorium, the original home of The Grand Ole Opry, also dubbed the “Country Music Mother Church” and where the Opry still holds winter shows, is only a few blocks from the Hall of Fame. In many ways the Hall of Fame’s stewardship of The Ryman seems perfect, and in line with its charter to preserve country music’s history. The Ryman was virtually abandoned for over 20 years after the Opry House was opened in 1974.

As unlikely as any sale or exchange of ownership of The Grand Ole Opry may or may not be, it is significantly more likely that a partial sale or split of the Opry assets could occur. Gaylord is probably less likely to sell its Opry real estate assets of The Grand Ole Opry House and The Ryman since real estate is Gaylord’s new core business, but these properties could be split, or leased to The Hall of Fame or another entity as part of the sale of WSM and The Opry radio show.

Maybe the most coveted asset of The Grand Ole Opry to Gaylord, the precious naming rights, might could be negotiated in a lease or partial ownership arrangement. Either the Opry name could be retained by Gaylord and leased to the Hall of Fame, or they could be given or sold to the Hall of Fame and then leased back to Gaylord for use in their Nashville properties. The naming rights are probably the most difficult portion of the dilemma of how to divest Gaylord from The Grand Ole Opry, and probably the main reason The Opry has not been spun off or sold yet like all of Gaylord’s other media assets. 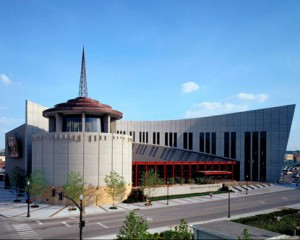 However unlikely it might be that The Country Music Hall of Fame would buy The Grand Ole Opry, the likelihood that Gaylord Broadcasting would be sellers is somewhere between likely and inevitable, especially if the difficult naming rights issue can be resolved with the new owners. The list of other potential new owners if The Hall of Fame is eliminated is limitless, but in the changing world of media where radio’s relevance and revenue is declining, this might just plunge the Grand Ole Opry into a foster care situation where it is bounced back and forth in the portfolios of companies that care even less for its history and significance than Gaylord does until it is eventually liquidated. 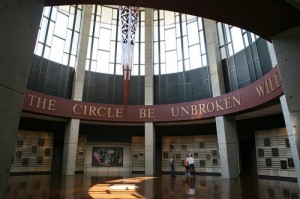 Pointing up from the top of the dome of the Country Music Hall of Fame is a radio antenna, with a corresponding antenna pointing down into the center of the Hall’s rotunda, symbolizing the importance of WSM and The Grand Ole Opry radio program to the formation and continued success of country music. How fitting it would be if that antenna actually broadcast the station and program it was built to symbolize, with its base being the circular Hall itself lined with bronze plaques of its inductees and the eternal question “Will The Circle Be Unbroken?” The Hall of Fame taking stewardship of the most reverent of country music institutions in The Grand Ole Opry may be the only way the answer to that “Will The Circle Be Unbroken?” question continues to be “No”.