Why The Stagecoach Festival Lineup is a Good Thing 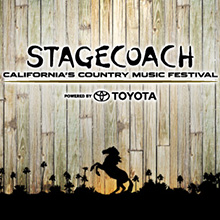 A couple of days ago, The Stagecoach Festival out in California announced their 2014 lineup, capped by headliners Eric Church, Jason Aldean, and Luke Bryan. Since its inception 7 years ago, Stagecoach has been the California contingent to America’s big corporate country music festivals, but what makes Stagecoach different is that they actually include independent and up-and-coming artists as well—something most festivals in the corporate country field either completely avoid, or only include with a few token names.

For example if you look at the 2013 CMA Fan Fest in September in Nashville, the LP Field lineup consists of a who’s who of mainstream country, with no room for up-and-coming or independent acts. Same goes for the Northeast’s primary corporate country festival called Taste of Country Festival, with virtually all the performers consisting of acts in the mainstream and on major labels.

But at Stagecoach, the majority of the acts on the bill are independent, up-and-coming, or legacy artists, despite its big headliner names. When Stagecoach made its 2014 lineup announcement, my social network channels blew up with folks incensed that an artist like Luke Bryan would be listed in a bigger font than Loretta Lynn. But my reaction was completely opposite.

The big, mainstream names go without saying at a festival like this, and are in no way out of the norm of what we’ve seen from Stagecoach, or any other corporate festival over the last decade. What I was excited to see were names like Jason Isbell, The Whiskey Shivers, Corb Lund, Holly Williams, Sarah Jarosz, Shovels & Rope, and Shakey Graves on a bill with arguably mainstream country’s three biggest current names. The opportunities and exposure a festival bill like this can open up for these artists can’t be understated. If there’s any beef with their lineup, it would be that there’s not a woman represented in the top 2 tiers.

Envision the Stagecoach lineup as a radio playlist. If you went to CMA Fest, the lineup would virtually mirror the playlists of corporate radio. If you went to Taste of Country Festival, it would mirror corporate radio, with maybe a few more smaller and older names mixed in. But if the Stagecoach lineup mirrored a radio playlist, country radio would immediately flip-flop and improve ten fold, even if the names in bigger fonts got more plays.

The Stagecoach lineup is actually a great test case and example of how pragmatism and choice could be used to improve the country music format. What hardline purists and hardline independent fans need to understand is that big pop country acts have always, and will always dominate the country music landscape. Completely eliminating names like Jason Aldean from the picture would be great, but setting out to do this is an idealist, fool’s errand. The more reasonable approach is to simply lobby for choice—for traditional country and independent artists to simply be given a place at the table and an opportunity to reach the ears of the masses just like the big names. This would allow listeners to be able to decide what is best instead of a few select radio programmers. And this is what a lineup like the one for Stagecoach does. Jason Isbell vs. Jason Aldean? I’ll take that match. I’ll make that bet. And even if Isbell loses, he will benefit from the exposure the opportunity gives him.

I agree the marking of importance of artists based on font size, which has now become the norm in American festival culture, is always unfair, and Stagecoach is just as guilty as any. But it’s not arbitrary, and saying that this approach doesn’t make sense is being a little short sighted. Jason Aldean, Luke Bryan, and Eric Church regularly sell out arenas. Loretta Lynn doesn’t. The font size of a given artists’s name is directly tied to the draw of that artist. This says more about the priorities of society than it does how Stagecoach decides to market their lineup. They invert the font sizes to make some happy, and their festival loses. And so do the artists, including the smaller, up-and-coming artists looking to capitalize off the opportunity to play to the same-sized crowds as country’s top headliners.

For Aldean, Church, and Bryan, Stagecoach is just another tour stop. To Jason Isbell and Loretta Lynn, it is potentially the biggest crowd they will play to all year, and the biggest opportunity to reach new fans. And virtually every festival takes this stupid font size approach, including independent ones. The independent-minded Muddy Roots Festival last year made all of its other performers subordinate to the punk band Blag Flag that was only sporting one original member, and had a rival version of the band touring at the same time.

The angry feeling some people have for the Stagecoach lineup underlines many of the inherent problems with America’s emerging festival culture. For years in Europe, summer music festivals have dominated the live music landscape. Over the past decade, the US has also become more dependent on a seasonal festival schedule, making lineup announcements and fonts sizes an annual exercise in publicity stunts and polarization. Festivals are popping up everywhere, hungry for patrons and performers, and being pressured to make big splashes with their lineups. We’ve reached the point where both the artists and patrons are getting squeezed, while the emerging festival season is draining interest in the single music show on any given night that many artists are dependent on to make a living throughout the year. Some artists are playing to empty venues because fans are passing them over in lieu of the festival experience.

Massive corporate festivals like Bonnaroo, ACL Fest, and Lollapalooza that blend all genres further complicate the festival landscape. The music is getting lost in the bustle by promoters, sponsors, and corporations trying to land cool names for their festivals, trying to outdo their competition, trying to rack up “likes” on Facebook, etc., with patrons caught in the middle trying to do what is best to support the music getting stuck with tough decisions, and falling to the mercy of the guilt game.

It all almost makes you want to stay home. But if I had an opportunity to go to Stagecoach, I would, and I may. Because no matter whose name is in the biggest print, there are plenty of names in their lineup worth paying attention to. Is it a shame that Loretta Lynn’s name isn’t as big in a lineup card as Luke Bryan’s? Of course it is. But that’s better than Loretta’s name not being there at all, which it isn’t for the majority of the country’s corporate music festivals. Many facets of the country music business could learn from the Stagecoach model. 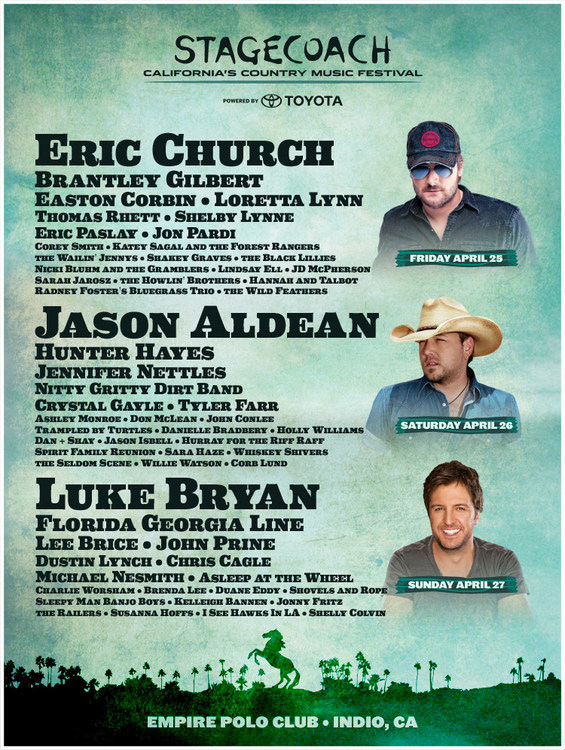