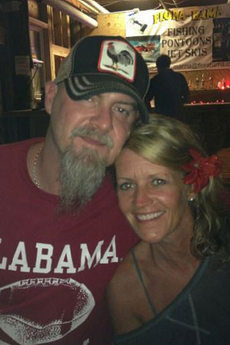 2 ½ weeks after the unfortunate shooting death of Outlaw country songwriter and performer Wayne Mills, the wife of the deceased artist is speaking about the circumstances surrounding his passing, the type of man he was, and how his death touched many lives.

“He told his mom that day that he was going to marry me,” Carol Mills told WKRN in Nashville about the first time she met Wayne in 1992 when she was just 19-year-old. Wayne was a football player for the University of Alabama, and Carol was a cheerleading instructor. “So that was actually one of my favorite memories, was the first day that we met… That’s one thing I have peace about. I know that Wayne knew how I felt about him and there is no doubt in my mind about how he felt about me and Jack.” Jack is Wayne and Carol’s 7-year-old son. “He’s my son’s hero and my hero and my best friend but it hasn’t been just my loss, it’s been a loss to many.”

Carol says the misidentification of Wayne by Nashville police for the first 9 1/2 hours after the shooting meant she was unable to be at her husband’s side for his final moments. She made it to the hospital, but emergency room personnel would not let her visit Wayne thinking the patient battling for his life was songwriter Clayton Mills, not Wayne. Carol’s sister finally pulled up a report about the misidentification on her phone. “It’s awful to think I could have had ten more hours with him,” Carol says. “Yeah, I could have been holding his hand…None of it makes sense to me. I wasn’t there, but none of it makes sense to me…Mr. Ferrell will have to carry the burden of what he did. The only thing I ask is that we try to get justice for Wayne.”

Carol also spoke about the silver lining surrounding Wayne’s death. As an organ donor, Wayne was able to save the lives of 5 people.

“Wayne was just very selfless, he was always thinking about somebody else, always…He was able to save five lives and at this time of the year I can’t imagine how amazing that is that five families have been able to have more time with their love ones. To me that’s the most amazing gift. He’s given five people their life back when his was so tragically taken.”

Wayne’s kidneys, pancreas, liver and heart went to people waiting on transplants, reports The Tennessean. “It’s comforting to think that his heart never stopped beating,” Carol says. She had been receiving calls all day asking if Wayne was okay after seeing reports that a songwriter with the last name “Mills” had been shot at the Pit & Barrel bar. Carol says it wasn’t unusual for Wayne not to come home after a show, instead electing to stay with friends. It was a life very similar to that of a firefighter or a nurse the widow says. She recognizes that the loss is not just hers, and that she’s not alone in dealing with the grief.

“Through all of this I realized his life’s work was really making friends for me and Jack. Especially at this time of the year when people have their own families to think about, that Wayne touched them enough, and talked about me and Jack enough that they would want to reach out and help us, it is amazing…Continue to play his music, that’s all Wayne ever wanted was play his music. He wanted people to love what he did.”

Chris Ferrell, the man who shot Wayne Mills and has claimed self defense in his death, was indicted on 2nd degree murder charges by a Grand Jury on December 6th. He is set to appear in court on Monday to attempt to get his $300,000 bond reduced. Despite reports to the contrary, the Wayne Mills autopsy report has yet to be concluded or released.