Texas and Red Dirt music isn’t just for folks in Texas and Oklahoma. The title of the music may imply that it’s a regional thing, but the appeal is international, and the talent is world-class. No matter where you are, Texas/Red Dirt is a much more healthy alternative to the mainstream. That’s the reason the Wild Hare Country Festival in Canby, Oregon near Portland has commissioned a second installment to take place July 19th and 20th, bringing Texas and Red Dirt acts to the West Coast, along with other worthy national and regional performers.

This year the festival will be headlined by Whitey Morgan and the 78’s, whose 2018 record Hard Times & White Lines is still melting faces, and Cody Johnson, whose name has become so big, he had to co-partner with Warner to release his last record Ain’t Nothin’ to It, which promptly shot to #1 on the charts.

Also taking the stage at 90-acre wooded site at the Pat’s Acres Racing complex will be Saving Country Music’s Best Live Act of 2018 and the newly-minted Ameripolitan Outlaw Group of the Year, the surging Mike and the Moonpies. They will join Micky and the Motorcars, Jason Boland and the Stragglers, recent Real Country contestants Bri Bagwell and the Scooter Brown Band, Kaitlin Butts, The Dirty River Boys, The Piedmont Boys, Tylor and the Train Robbers, Brass Tacks, and The Lowdown Drifters. A few more names will be added to the schedule in the coming weeks as well.

“There is a revolution happening in country music that is centered around real deal, honest, heartfelt songwriting and performances that resonate with true country fans,” says festival co-founder Joan Monen, who is also the proprietor of the Wild Hare Saloon.

The Wild Hare Country Festival will transpire on three separate stages, with camping, glamping, RV, and VIP options available, and food and beverages on site. For more information and to purchase tickets, go to wildharecountryfest.com . 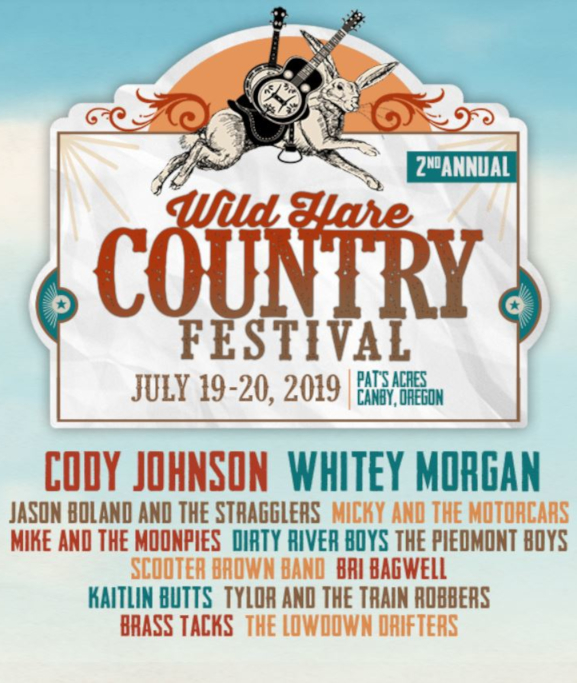