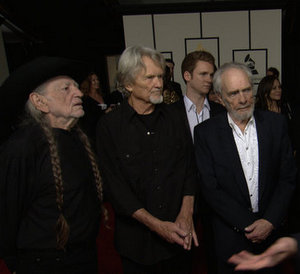 At the 56th Annual Grammy Awards Sunday night, country legends Willie Nelson, Kris Kristofferson, and Merle Haggard performed a medley of songs together along with Blake Shelton, with the occasion being Kris Kristofferson receiving a Lifetime Achievement Award and having his first self-titled album inducted into the Grammy Hall of Fame. But this grouping wasn’t accidental, or an augmented version of the supergroup The Highwaymen that Willie and Kris were once a part of with Johnny Cash and Waylon Jennings.

A long-planned, and even longer-rumored album and grouping of Willie, Merle, and Kris called “The Musketeers” has been in the works for years. Saving Country Music first reported on the potential supergroup in January of 2011 when the three men were assembled as part of Merle Haggard’s recognition by the Kennedy Center Honors. Haggard told Rolling Stone at the time:

We got to eat a little something together. We didn’t know what the hell this food was, but we thought it was funny. We (Merle and Willie) talked about doing that together, but with the presence of Kris, we talked about the three of us doing it. I’m sure if we’re healthy and live to do it, we’ll do it. We thought about the title: the Musketeers. You know, because there’s the three of us. We’ll come up with some little way of describing ourselves I guess and put it together into a show.

“The Musketeers” might just be a placeholder for the eventual name, but apparently the three Country Music Hall of Famers are still serious about the idea, and are working on music. When asked by Billboard before The Grammy Awards if a collaboration between the three men could be in the offing, Willie Nelson responded, “We’re working on one now.” When asked when fans could expect something, and if it could be this year, Willie responded, “As soon as we get it together. Could be.”

Merle Haggard and Kris Kristofferson have toured together in an acoustic show numerous times since 2009, and Willie Nelson worked with Merle Haggard in 2007 on the album Last of The Breed. Willie and Merle also collaborated on the Townes Van Zandt classic “Pancho & Lefty.”

Finally stimulating The Musketeers to go from talk to actual tracks might be the recent revelation from Kris Kristofferson that he’s beginning to experience memory issues.