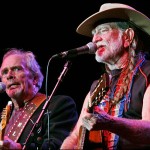 Willie Nelson and Kris Kristofferson were part of the recent Kennedy Center Honors festivities honoring Merle Haggard in Washington, and during the numerous functions, the three country music legends apparently had some time to discuss the possibility of a supergroup. Previously Merle had discussed plans of doing an album with Willie, but in an exclusive interview with The Rolling Stone, Merle explained how Kris Kristofferson’s name got added to the mix.

We got to eat a little something together. We didn’t know what the hell this food was, but we thought it was funny. We (Merle and Willie) talked about doing that together, but with the presence of Kris, we talked about the three of us doing it. I’m sure if we’re healthy and live to do it, we’ll do it. We thought about the title: the Musketeers. You know, because there’s the three of us. We’ll come up with some little way of describing ourselves I guess and put it together into a show.

Of course Willie and Kris were members of The Highwaymen, a supergroup that also included the now deceased Johnny Cash and Waylon Jennings. Merle and Kris toured together in 2009 and again in early 2010 in an exclusively acoustic show. Merle & Willie were part of the Last Of The Breed album and tour with Ray Price in 2007. No details yet if the “Musketeers” would be solely an album project, a tour, or a full blown supergroup.

Merle also sung the praises of his Kennedy Center Honors presentation, despite some not being impressed.

Well, it’s the ultimate . . . it’s great, and probably couldn’t be topped. And I enjoyed watching Vince Gill give Brad Paisley a lesson ­ he took a course on “Workin’ Man Blues.” But Brad is so hot and so good.