Willie & Billy Joe Shaver Protest in “Hard to be An Outlaw” 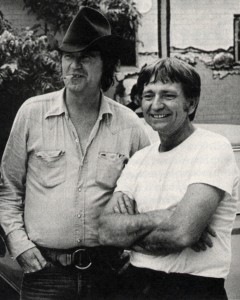 Well it’s about time we had some established country artists take up the trend of country protest songs, and give modern country their what for. As the lead single from Billy Joe Shaver’s upcoming album Long In The Tooth scheduled for release on August 5th, the long-time, storied country Outlaw songwriter has teamed up with his old buddy Willie Nelson to release a duet called “It’s Hard to Be an Outlaw” that puts new school, fake country Outlaws and other country music interlopers in its crosshairs.
Some super stars nowadays, gets too far off the ground
Singing about the backroads, they never have been down
They go and call it country, but that ain’t the way it sounds
It’s enough to make a renegade want to terrorize the town

Though these types of protest songs have become standard fare, if not clichÃ© in their own right these days, coming from the powerhouse pairing of Billy Joe Shaver and Willie Nelson makes this one especially memorable. In fact, according to Shaver, they could have gone a step further. “It’s not harsh enough, I don’t guess,” Shaver told Rolling Stone. “He and I both feel the same way about that. We text back and forth, and we figure we’re the only ones over 70 years old that text. I’m sure that’s not right, but I know Kris won’t. Kristofferson won’t do it. I mentioned this title to Willie and he said, ‘Man, you oughta write that.'” 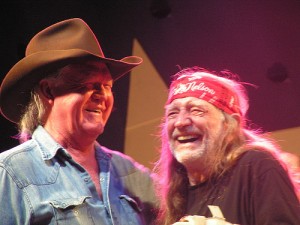 “It’s just stupidity,” Shaver continues. “It’s like walking down a hall and seeing a Picasso and saying, ‘Damn, that thing’s old! Let’s throw it out.’ Fortunately, you can’t burn songs. You can burn pictures, but a song will live forever.”

Willie Nelson and Billy Joe Shaver have remained good friends since their early days as original country music Outlaws in the mid 70’s. When Shaver was on trial for shooting a man in self-defense in Waco, Willie Nelson showed up as a character witness. The title track of Willie Nelson’s 2012 album Heroes is about Billy Joe. And the two stars collaborated recently on another Billy Joe Shaver-penned duet, “Wacko From Waco“.

“I feel like that I’m still doing the same thing I always did, it just got lost in the shuffle because all this new stuff came in,” Billy Joe told the Ft. Stockton Pioneer in November. “There’s a lot of money behind these people”¦It’s just people trying to make money, that’s all it is and I can’t begrudge anybody for trying to make money. We’re all trying to make a living and do the best we can.  I feel that the art part of it just went out the window”¦but every once in awhile you will hear a good song. I can’t say that it’s all bad, it’s not. It’s just most of it’s bad”¦It’s kind of gotten way out of hand right now I think, but the solid foundation is still there.”

While premiering the new “It’s Hard to be An Outlaw” song, Billy Joe Shaver also mentions something about rapping on Long In The Tooth‘s title track. “I didn’t know it was that easy. I took a crank at it and went crazy and did it.”

Billy Joe Shaver, duet, Hard To Be An Outlaw, Long In The Tooth, rap, Willie Nelson