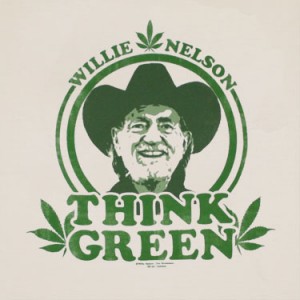 It was only a matter of time before marijuana started to become big business with states like Colorado, Alaska, Oregon and Washington moving towards full legalization, and apparently Willie Nelson is trying to beat the bigger companies to the punch by developing a signature marijuana brand that is scheduled to include storefronts, products such as bongs and vaporizers, and specific strains and blends of marijuana to sell in the states that make possession of the plant legal.

The news comes from marijuana lobbyist Michael Bowman who is acting as the current PR rep for the product line which is still be in its fledgling stages. According to Bowman, the brand, currently named Willie’s Reserve, will encompass Willie Nelson’s thoughts and ideals about marijuana, but what actual involvement Willie Nelson will have personally seems to be more in spirit as opposed to overseeing day to day operations. Willie’s Reserve appears to be born more of Michael Bowman and Willie Nelson’s family, specifically his current wife Annie, who worked with Bowman on the Sustainable Biodiesel Alliance in 2005.

“Willie has spent a lifetime in support of cannabis, both the industrial hemp side and the marijuana side,” Michael Bowman explains to The Daily Beast. “He wants it to be something that’s reflective of his passion. Ultimately, it’s his. But it was developed by his family, and their focus on environmental and social issues, and in particular this crazy war on drugs, and trying to be a bright light amongst this trail as we’re trying to extract ourselves from the goo of prohibition. Really he wants it, at the end of the day, to envelop what his personal morals and convictions are. So from the store itself to how they’ll work with suppliers and how things are operated, it’s going to be very reflective of Willie’s life.”

Right now there’s no specific plans to open stores in any specific locations, but Michael Bowman says that’s all coming in the next calendar year, especially to states that have already passed legalization. “It will be like when you walk into a Whole Foods store,” Michael says about the selections of marijuana the stores will include. “Whole Foods has their 365 brand, or you can buy Stony Brook, or you can buy Horizon”¦ It’ll all fall under that umbrella of ‘here’s our core beliefs, and here’s our mission statement,’ and they will be a part of that, to be a part of us.”

Willie also recently announced a new album with Merle Haggard called Django and Jimmie, with the initial single called “It’s All Going to Pot” to be released on 4/20.