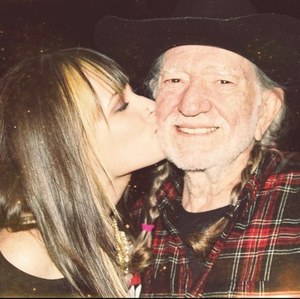 It was bound to happen. Despite the 55 year age difference, Kacey Musgraves and Willie Nelson seem to be cut from the same country music cloth; kindred spirits if you will. They both are songwriters, both Texans, are performers by default that don’t seem to have much desire for showbiz, and now both have achieved critical acclaim. Kacey has been touring with Willie and Alison Krauss this summer, and it seems only natural that the close quarters might eventually breed a collaboration. It appears Willie has taken a shine to Musgraves, and Kacey’s avatar on Twitter for quite some time now has been of her planting a wet one right on Willie’s cheek. I guess there’s no generation gap when you’re both old souls … and you know, there’s that little business of their mutual appreciation for, um, aroma therapy.

Speaking of, Willie was being interviewed by the pot rag CelebStoner.com earlier this week, and let slide an interesting tidbit about what he and Musgraves have in store. “It’s really a lot of fun, we’ve had a good tour,” Willie said about traveling with Musgraves. “I look forward to touring with those folks again one day. Kacey and I are planning on doing a song together, an old song I wrote called ‘You Sure This Is Where You Want to Be.’ We’re going to do some recording together and that’s going to be cool.”

Willie seems to allude that it may be more than just one song the duo might work on together, but the one song Willie mentions, “You Sure This Is Where You Want To Be”, is known more commonly by the title “Are You Sure”, and first appeared on Willie’s third studio album, Country Willie – His Own Songs from 1965. It was a co-write with his former Cherokee Cowboys bunk mate Buddy Emmons.

“Are You Sure” comes from the same songwriting era as Willie’s standards like “Night Life”, “Crazy”, and “Hello Walls”. And despite never having received the same accolades as the others, it has that simple Willie sentiment that is hard to not get sentimental over, and a moral that is timeless.

No word on when any Willie/Kacey collabs might see the light of day, but we’ll definitely be listening for them.