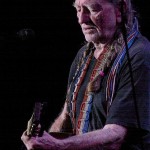 Wilie Nelson, whose currently on a tour of the east coast that started in Durham, North Carolina on January 18th, and included a performance at the Presidential Inauguration on January 21st, has just renamed his tour the “Old Farts & Jackass” tour. The move comes in response to the controversy over Blake Shelton’s recent comments on a GAC Backstory interview, saying in part:

Nobody wants to listen to their grandpa’s music. And I don’t care how many of these old farts around Nashville going, “My God, that ain’t country!” Well that’s because you don’t buy records anymore, jackass. The kids do…

The somewhat veiled and tongue-and cheek announcement declares Willie Nelson the co-leader of the “Old Fart Party,” and also includes a reference to the ongoing lip-sync controversy involving Beyonce. Read the entire pronouncement below.

The Old Farts and Jackass tour began in Durham, NC on January 18th at the Durham Performing Arts Center. Then Saturday night Willie Nelson and Family performed in Bowling Green, KY at the Performing Arts Center before heading south to The Tabernacle in Atlanta. But now it’s January 20th, excitement is in the air, and Inauguration Day is finally here.

After the annual Bacon and Egg luncheon, the Swearing Ceremony took center stage as Willie stepped forward and placed his hand on Peg Bible.  The Joint Congressional Committee spoke of the logistics of presenting such an unpresidential event in an old Church and of security concerns that have plagued the event from the beginning. The growing crowd stood in line for hours and wondered. “What will he wear? Willie cut bangs?”

After much anticipation Willie  Nelson finally emerged. Dressed in an all black ensemble by American designer Levi Strauss, the co-leader of the Old Fart Party mesmerized the crowd with the first dance, Whiskey River.

The lip synching controversy would take over the headlines later, but the official answer from Nelson’s camp remained no. No Willie Vanillie here ladies and gentlemen, no tricky audio antics. Willie sang it all live. What we have elected to see is just a man, his band, his family and his guitar.  The audience in Atlanta will testify before any congress; country is in good hands.