NOTE: This release has been moved from April 24th to July 3rd.

Willie Nelson will release his triumphant 70th studio album called First Rose of Spring via Sony’s Legacy imprint. Seceding much of the songwriting to others on this effort aside from a couple of tunes, the title track comes from the pen of Randy Houser, Allen Shamblin, and Mark Beeson, and has been released ahead of the record (listen below).

Also appearing in the songwriting credits is Billy Joe Shaver with “We Are The Cowboys,” Chris Stapleton’s “Our Song,” “I’m The Only Hell My Mama Ever Raised” popularized by Johnny Paycheck, and Toby Keith’s “Don’t Let The Old Man In,” which was recently cited by Saving Country Music as a great example of a well-written song by a conservative songwriter. Originally appearing in the soundtrack for the Clint Eastwood film The Mule, “Don’t Let The Old Man In” perfectly encapsulates the Tao of Willie, who is still touring strong and releasing records at the age of 86. He’ll turn 87 a week after this new release.

The album also includes songs co-written by Casey Beathard, Doddle Owens, and the recently-passed Whitey Shafer. The album ends with “Hier Encore”—a standard written in French in 1964 but was a big hit for Roy Clark as “Yesterday When I Was Young” in 1969. Once again Buddy Cannon produced the effort, and co-writes a couple of songs with Willie. 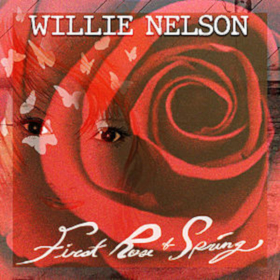 If you think Willie Nelson is too old to contribute much anything else, you might want to think again. Just a few weeks ago he won the Grammy for Best Country Solo Performance for the song “Ride Me Back Home”—the title track of his record released in 2019.

First Rose of Spring is now available for pre-order.