Willie Nelson’s “The Wall” from the Upcoming “Band of Brothers” 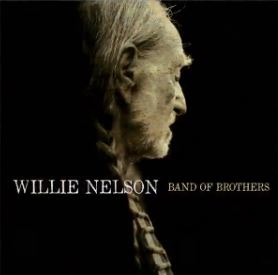 Isn’t it interesting how we look upon Willie Nelson as such a saint of not just music or country music, but of the nation and world, and here he is releasing a song that instead of reveling in his accomplishments and resting on his laurels, catches the 81-year-old country legend looking back upon his past mistakes, self-deprecating and pensive, yet understanding how those mistakes made him the man he is today.

Willie Nelson’s next album Band of Brothers is set to be released June 17th, and his latest original song in a legendary, if not unparalleled songwriting career is simply called “The Wall.” Band of Brothers breaks from Willie’s recent output of albums of mostly covers by including nine Nelson-penned tracks as part of the 14-track album. The covers include Billy Joe Shaver’s “The Git Go” (a duet with Jamey Johnson), Vince Gill’s “Whenever You Come Around”, and “Songwriter” by Bill Anderson and Gordie Sampson. As with the last few Willie Nelson releases, the producer duties are being handled by Buddy Cannon.

Like the words, the chord selection of “The Wall” helps give rise to memory and reflection, and shows that Willie has lost little in his ability to convey a feeling in his advanced age. Long-time harmonica-playing compatriot Mickey Raphael adds the color to the composition, as does the familiar tone of Willie Nelson’s nylon string guitar in a rather stripped down track whose beat is kept with simple brushes that rest at the beginning of the chorus to give the song an extra little emphasis. Though Willie’s voice can sometimes be hit or miss in the live setting these days, it is as strong as ever here, holding that singular tone that looms so large in the ethos of classic country fans.

Where Willie Nelson’s two 2013 albums with Legacy Recordings—Let’s Face The Music and Dance, and To All The Girls…—felt somewhat like side projects, with little truly new material, Band of Brothers is already beginning to look more like 2012’s Heroes— Willie’s first with Legacy Recordings, and an album that very much felt like a retrenching.

With no discounts for age or sliding scales because of his legendary status, Willie Nelson’s “The Wall” still captures the heart and stirs the memory, and makes for quite an enjoyable piece of music.