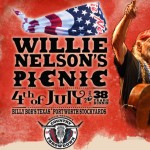 Yesterday I was fortunate enough to attend the most talent-rich event I have ever been to, as the convergence of Willie Nelson’s 38th Annual 4th of July Picnic met up with the finale of this year’s Willie Nelson Country Throwdown tour at the largest honky tonk in the world, Billy Bob’s Texas, in the historic Ft. Worth stockyards.

I will have many observations about the specific bands and artists below, but aside from a few hiccups, I grade the whole thing two guns up for sure. Holding what is supposed to be a picnic in a giant honky tonk may not be in the spirit of the event, but on a 100+ degree day, giving folks the ability to take a respite from the heat inside made for a much more enjoyable day of music that stretched to over 12 hours from David Allan Coe’s downbeat to Willie’s encore.

Nepotism was nigh at the picnic, as Willie’s family all got choice spots on the air-conditioned inside stage during the day, and the legends like Coe, Ray Wylie Hubbard, and Billy Joe Shaver had to brave the heat. But many folks braved it with them, and all performers gave it their all.

One bit of drama came from some folks being disappointed after the Ft. Worth Star-Telegram newspaper posted Leon Russell as one of the top five acts to see, when he was not scheduled to be there. Also rumors swirled that Merle Haggard was the “special guest” on the schedule. He likely was at some point, but might have canceled due to illness.

Below are my reviews of the acts I caught.

Knowing I had a dozen hours of music ahead of me, I arrived at the picnic fashionably late, missing David Allan Coe (who I can see anytime living in Texas), Johnny Bush, and Drake White, but just in time to see Any Nelson and her lilting, eepish, yet extremely raunchy folk duo with Cathie Guthrie (daughter of Arlo Guthrie) called Folk Uke. Songs like “Motherfucker Got Fucked Up” and “I Miss My Boyfriend (Will You Hit Me?)” contrast nursery-rhyme music with adult-themed content in a very original approach. It’s a bit, but a good one. As they finished with the latter song, I literally saw three pairs of mothers with children clasped at the ears heading for exits.

I swear up to Brantley Gilbert walking on stage I thought he was a girl. I vote for no more asexual names in country music. His backwards-hat bravado and canned checklist lyrics were not my bag at all. Probably didn’t help his chances that he co-penned “Dirt Road Anthem” with Colt Ford, but giving him an honest try, I didn’t find much.

Unlike Brantley, Lee Brice came across as a genuinely good guy, and his songwriting prowess is undeniable. He’s penned mega hits like “Beautiful Every Time” and “Love Like Crazy” that are not really my speed, but are not the objectionable Music Row formulaic fare either.

Lukas Nelson & The Power of the Real

After Brantley and Brice’s outside shows, I headed inside for Lukas Nelson & The Power of the Real. As simple as you can put it, Lukas Nelson stole the show that day. He was the highlight of the Willie Nelson 4th Picnic/Country Throwdown mixer, and in many ways the event felt like a coming out party for him. He is a talent all his own, not just carrying on the family business, though he might be the best poised to. Tremendous energy, a spectacular guitar player, and a sincere passion for music and performance. Willie’s roots are deep in him, and when he sings in the high register, it carries memories of Willie’s vocal tone in his prime. His psychedelic and roots-inspired rock is deeply infectious and universally appealing.

Lukas also played the entire sets with Jamey Johnson and Willie, and offered a spark to both. I think we will be hearing from him much more in the future, or at least we should, and I will be searching out his latest album for review. He should learn to work some subtlety into his pot anthems though. Power of the Real is an awesome lineup of talent as well. Two guns way up for Lukas.

I can’t think of two guys to better illustrate how older country music legends can still have universal and even young appeal, and I saw this in the reaction of the crowd to both Billy Joe and Ray.

Billy Joe Shaver was and is the first punk of country music, and still brings a tremendous amount of energy and spunk to his show. Shaver was favoring the right shoulder that kept him away from touring for a while, but he was still punching and dancing, and brought the same amount of energy as he did the last time I saw him two years ago. Also have to give him props for referencing Cowboy Troy’s big black cell phone on stage. Shaver got some of the biggest crowd reactions all day. 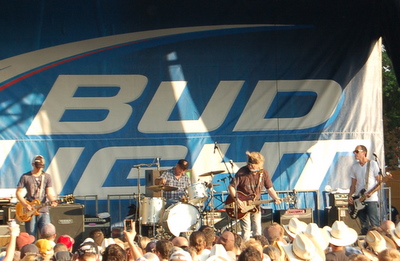 Though I’ve seen Ray Wylie Hubbard a few times live, this was my first opportunity to see him with a fully fleshed-out band that included his perennial drummer Rick Richards on a full set, studio maestro George Reiff on bass, and Hubbard’s son Lucas on lead guitar. Once again Ray proved why he’s the Wylie Lama of Texas, putting on an excellent roots-infused rock n’ roll show full of fresh and relevant material. Hubbard also can’t be overlooked as a showman and storyteller. Flanked on all sides of the stage by Bud Light signage, he was savvy enough to swap a Coors reference in “Drunken Poet’s Dream” to the on site sponsor.

There were 3 big surprises that I took from the whole event, and #3 was the younger Lucas Hubbard. He didn’t put on a dexterity clinic, but in regards to taste, his guitar solos were something many of the other overplaying guitar slingers of the day could have learned from.

One of the cool parts about The Country Throwdown tour is that it showcases some of the up-and-coming, young songwriters in what they call “Nashville Round” sessions. Austin Lucas, whose latest album A New Home, In The Old World is a Saving Country Music Album of the Year candidate, was featured in one of these picking sessions. This is a very demanding environment for a musician, leaving you out there naked with only a guitar. Austin won the crowd over with his energy and his honest songwriting. This video will give you a glimpse into these Country Throwdown rounds:

The other highlight from the one Nashville round session I caught was Caitlyn Smith. She would be my #2 surprise of the day. Caitlyn had the best voice of the whole event, and well-penned songs to compliment that voice, as well as dynamic and energetic guitar playing. Beautiful girl, and certainly one to watch. And hey, she has a cut on the new Jason Aldean record! Yes, Aldean’s tentacles are were all over the Country Throwdown portions of the day.

What more can you say about Ray Price than that he is the utmost of class, and a true tie and testament to the golden era of country music. With a 5-piece fiddle section all dressed in white and a grand piano, Ray’s performance legitimized the whole event as a true extension of all of the modes of country music, not just the cowboys meet the hippies, or the new school Nashville songwriting crop. Of course not the heart pumping experience of the other bands, but his style and authenticity still won over the crowd, and he received some of the loudest applause all day.

Listen folks, I know that Jamey Johnson is a polarizing figure, and I know no matter what I say about him, good or bad, will cause a strong reaction. But you come here for my opinions, raw and unfettered, and I do my best to be as honest as I can be with you. Jamey Johnson was my #1 most anticipated person to see that day, and trust me, I wanted to like him. The guy is an excellent songwriter, there is no denying that. I think he is a class act. I do not think he’s “sold out” or doing one of these “new Outlaw” bits to monopolize on a trend. But the simple truth is I simply found his set boring, and I feel confident in saying I wasn’t the only one.

Most performers put out some bit of energy. You don’t have to be like Lukas Nelson, diving off the drum riser. Waylon Jennings and Whitey Morgan are excellent examples of emitting energy and stage presence without acting a fool or moving around. Jamey Johnson not only doesn’t put any energy out, he is an energy drain. His stage presence is somewhere between unanimated and disinterested. 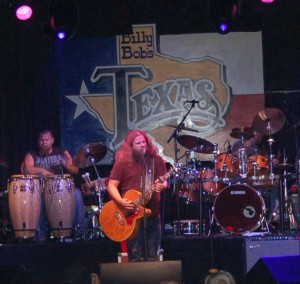 Every song was slow and droning. He began almost every song with a quiet, acoustic solo and low singing that you could barely hear over the distracted crowd talking amongst themselves. He had a percussionist in his band to add emphasis, but it seemed out of place, and his steel guitar leads sounded like Stratocaster, with little twang or sustain. The way Jamey flicks at his guitar with the pick is visually distracting, like he’s trying to depose a bugger from his baby finger.

What else can you say about Willie Nelson, except that he’s Willie Nelson. He appeared to be fighting off a cold, sniffling and blowing his nose at times on stage, but he brought it as big as ever, taking mere seconds between songs if that, and playing longer than he needed to. The “Family Band” was all there, sister on piano, Mickey Raphael on harp, Bee Spears on bass, and Paul English, having suffered a mild stroke recently, would come out and play brush snare during the slower songs. Lukas Nelson and Ray Benson were on stage for the whole set, and Micah Nelson and elements of Promise of the Real made appearances on and off as well.

At one point all the Country Throwdown performers came out on stage for a gospel medley, and it was one of the highlights of the night.

When Warped Tour organizers announced they were putting on a country tour, I admittedly was a little suspicious, wondering aloud about the viability of the idea, and just how much true underground/independent/up-and-coming artists would be emphasized. Some of my fears were realized last year when the tour was forced to cancel shows, including the Dallas stop I was planning to attend. The word is attendance has been OK this year, but under expectations.

The songwriters rounds are good, but I would like to see a little more emphasis on finding those amazing bands in country that are flying under the radar, and outside of the Nashville corridor, and giving them a chance beside the bigger talent. What I will say for the Throwdown that can’t be overlooked, is that all the participants are songwriters first, every one of them, even Brantley Gilbert. That’s seems to be their niche, at least for this year, and that in itself is commendable.