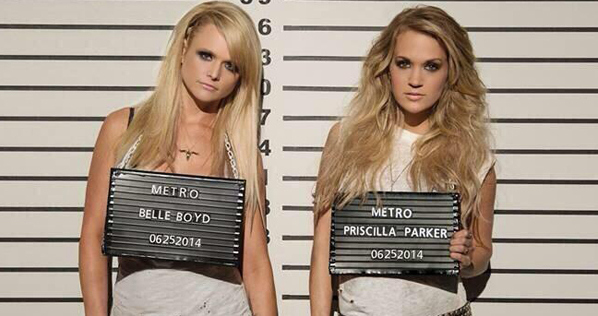 Last year about this time, music periodicals left and right were falling over themselves to declare 2013 the “Year of the Woman” in country music. From Billboard, to NPR, to right here on Saving Country Music, the recognition of the creative leadership coming from female performers such as Kacey Musgraves, Ashley Monroe, Brandy Clark, Caitlin Rose, Lindi Ortega, Holly Williams, Kellie Pickler, and others was seen as one of the universal themes of 2013. Of course this theme paralleled one of the worst commercial performances by country’s females in history, seeing the virtual evaporation of women from the top of the genre’s main indices, and making the “Year of the Woman” a tale of two stories.

Music Row in Nashville may be dumb, but it’s not stupid. They saw the need to ramp up the female quotient to restore some diversity to the format. And here in the summer of 2014, we’re very much seeing the results of those efforts. And unfortunately, it’s not very pretty.

The first onslaught our ears were subjected to was the lamentable duet between two of country music’s most powerhouse females in Carrie Underwood and Miranda Lambert. An intriguing pairing, it was sure to get the attention of people even if the song was terrible, which it was. “Somethin’ Bad” was nothing more than a story-less banshee yawp taking two stars completely out of their element to try and show up the boys, and ended up denting the dignity of these artists as an obvious attention grab. It was the proverbial “Hey, look over here!” moment. And though the song did crest Billboard’s Hot Country Songs chart for a very short period, it has since fallen, while stalling on the Country Airplay chart at #21. Even with a double shot of star power, “Somethin’ Bad” didn’t have nearly the staying power of many of Bro-Country’s biggest anthems, which quickly rise to the very top, and stay there sometimes for months.

As strange as it may seem to characterize Underwood and Lambert as older stars since they still feel like fresh arrivals in the country scene in many respects, they are now both in their 30’s and are very much part of the established country music vista. Bro-Country has been mostly fueled by non-established male stars springing up left and right and landing monster hits. As soon as super hits from Luke Bryan or Jason Aldean begin to falter from a multi-month reign, there’s a Florida Georgia Line or Cole Swindell to back them up. Country music needed some girl power, and from some fresh faces if it was going to attack its female problem with full force. And that is just what we have seen over the last few weeks.

So now we have Maggie Rose and her tune “Girl In Your Truck Song” taking a submissive, pandering role to the Bro-Country phenomenon, hoping to ride the coat tails of the trend to a high chart rating. A new artist named Raelynn has a song out some are touting as being an answer to Bro-Country called “God Made Girls”. And leading them all might be Maddie & Tae from the Big Machine Records stable and what they hope to be a blockbuster in “Girl In A Country Song”.

All of these girls are very young, very cute, and very blonde, but do they deserve attention, and will they ultimately be successful? Though each artist and song deserves to be dealt with individually because they pose such variations to the Bro-Country backlash, they all are still taking the stance of referencing or utilizing the same approach as Bro-Country does in one capacity or another. It’s the “If you can’t beat ’em, join ’em” attitude. Leadership is not seeing what someone else is doing and attempting to capitalize off of it, whether that be from a positive or negative stance. It is about blazing your own path and making others follow in your wake.

One of the problems with the approach of these girls and their songs is they fail to recognize that Bro-Country is already very long in the tooth as a trend. Public sentiment is turning against Bro-Country in big numbers, and whether positive or negative in their take on the trend, by harnessing themselves to it these girls risk going down with the sinking ship. They may be very successful in the short-term, but if Bro-Country does a disappearing act like the disco or hair metal of country music, there will be collateral damage, just like there was in the disillusion of those trends.

Really, the most successful challenges to Bro-Country haven’t been coming from girls, but from men. Dierks Bentley was able to release an album and multiple singles that have shown surprising success amongst the Bro-Country landscape despite not giving into the trend himself. Same could be said for Eric Church. And as ironic as it may seem, Florida Georgia Line’s “Dirt”, which just became the most-added debut country single in country radio history, and has already landed at #1 on Billboard’s Hot Country Songs chart, might be the most successful ANTI Bro-Country song yet, because it comes from one of the subgenre’s pioneers, and still works well within the styling of the trend while delivering greater substance. “Dirt” does what the women failed to do: offer a more subsnative alternative that still includes mass appeal.

The problem with country music’s females are not the songs. There are plenty of songs out there that challenge Bro-Country; not because they directly call it out, but because they illustrate how you can have substance in a song, and it still be engaging and relevant. But those songs aren’t being released to radio, or promoted heavily by their labels.

What the women of country music need to do is to continue to the leadership they displayed during “The Year of the Woman” and let the men come back to them in the implosion of Bro-Country, not try to beat them at their own game. If you released a song like Kacey Musgraves’ “The Trailer Song” to radio, you would have a Top 10 hit with a waltz-time tune that would also have the country world singing along and tapping their toes. This would illustrate to country consumers that they have females choices in country music too.

The women are doing nothing wrong. There’s no need to have a change of direction. There are plenty of women and songs already saving country music. We just have to let them.