I’ll level with you folks. I do not like tribute albums. At all. Any of them. Period. No matter who the albums are in tribute to, or who is doing the tributing.

I’m not going to give some long-winded intellectual treatise about why, I will fully admit it simply comes down to taste. They are just not my speed. Chide me all you want, I probably deserve it. I do see they can be good ways to keep the legacy of one artist alive while trying to build legacies for others, and there must be a demand for them, because you see them all over the place. But for me, there’s one version of any given song that is my favorite, and I stick with it. I also appreciate the cohesive theme of original albums, which gets completely lost in tributes and compilations. 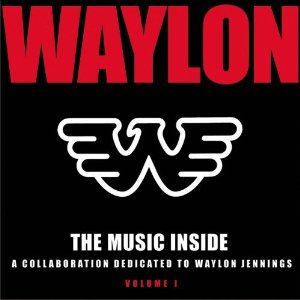 So when The Music Inside: A Collaboration to Waylon Jennings Vol. 1 (Volume 2 & 3 due out in June and October respectively) hit shelves, it got a big ol’ “Meh” from me. I’ve listened to it, and it’s not that the songs are bad. I don’t even have a problem finding the name “Trace Adkins” on the back cover. Despite his stupid songs, he’s got a set of pipes, and if he wants to tribute the flying W, more power. It’s just I’ve heard all this stuff before. Don’t need to again.

My favorite track was Shooter’s “Belle of the Ball,” probably because this is a little more obscure Waylon song that memory couldn’t ruin for me, and because Shooter really seemed to make it his own, while many of the other tracks just feel like worn out renditions. Alabama’s “Are You Sure Hank Done It This Way” is so horrifically similar to the original, why bother? Except they did change, “We made the change” from “We need to change”. By swapping two words, the delved into revisionist history, gave a huge pass to the current mainstream country climate, and somehow gave themselves credit for something they had no part of, or maybe even helped exacerbate.

What it did warm me to hear was that Waylon’s widow Jessi Colter, and son Shooter, who really took the point to make this happen, were reluctant themselves at the beginning, and even have a general distaste for Waylon covers in general. From The Tennessean:

If she’s (Jessi Colter) in a place where someone is making music and recognizes her, a Jennings song will soon ensue, and for Colter it will invariably be a dull replication that jostles a still-sharp memory. “I deal with it every day, and I sometimes stand braced and other times just relax and let it go over my head,” she says. “Frankly, sometimes it hurts my heart to hear someone do his songs.” All of which is part of why Colter was reluctant to green-light a series of three Waylon Jennings tribute albums…

If Colter was reluctant to participate in such a project, Shooter Jennings was downright apprehensive. There have been other tribute albums since Waylon’s 2002 death, and his son saw little reason to add to the pile. “I was leery of it, and even more guarded than my mom was. I’ve seen people with pure intentions and unrealistic goals, and I’ve seen people with agendas. And I’ve seen a Nashville system that will happily milk the ‘outlaw’ image of Waylon and other people, just so they can sell garbage.”

Shooter seems to have a different version of what happened to country music than Alabama:

The revolution happened then, but then it was overthrown. He wanted people to stand alone as artists, but it’s worse now than when he fought it. Now, people want so bad to fit into the system that they’ll do anything to make it.

Hearing the reluctance the representatives of the Waylon estate had before approving the project makes me feel like it was made with good intentions, even though it is being distributed by Big Machine Records; the “machine” behind Taylor Swift and Rascal Flatts.

If you like Waylon, you should definitely give it a good chance, and not let my admittedly jaded perspective on tributes get in your way. But I’d be interested to hear what YOU think about tribute albums in general, and specifically The Music Inside Vol. 1???

Preview & Purchase The Music Inside: A Collaboration to Waylon Jennings