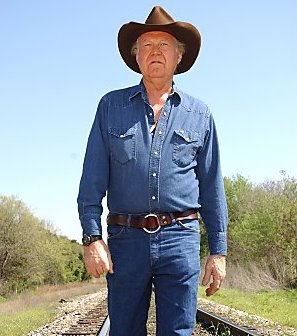 You can’t go long talking about badasses in country music without bringing up the one, the only Billy Joe Shaver. Though he may have never received the recognition of Willie, Waylon, or even Coe or Paycheck, his influence is arguably just important. When you have Elvis cutting one of your songs, Willie Nelson calling you his favorite songwriter, have Bob Dylan name dropping you, and had none other than Waylon Jennings record an entire album of your work, there’s no doubt you’re a badass.

1. Growing Up In Honky Tonks …. Literally

If Billy Joe Shaver is anything, he’s the real deal, and as clichÃ© as it may sound, his life was like a country song if there ever was one. Shaver was born in Corsicana, TX, and his dad left his mom before he was even born. Left to fend for herself, Shaver’s mother would leave him with his grandmother in Corsicana so she could work in honky tonks in Waco, but sometimes the young, impressionable Shaver would accompany his mother to the big town.

For a while Shaver’s mom ran a Waco honky tonk called Green Gables. According to Waylon Jennings, “She was a good-looking woman, red-headed and tough, and it was a classic dive, a dance hall with sawdust on the floor, spittoons, and a piano in the corner.” Billy Joe would run around the place bumming nickels from soldiers from nearby Fort Hood, and by the time he got a little older was known as quite a dancer and ladies man. His whole Green Gables childhood experience was later recapped in the song “Honky Tonk Heroes” that became the title track of Waylon Jennings’ famous 1973 album featuring all Billy Joe Shaver songs except for one.

2. Getting Four Fingers Lopped Off At A Lumber Mill 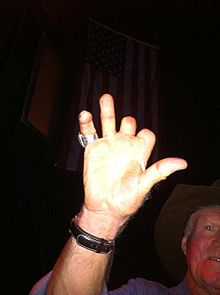 Talk about tough and gritty, Billy Joe Shaver has the scars to prove it. He didn’t get involved in music seriously until he was nearly 30, and it’s partly due to a lumber mill accident he suffered back in the 60’s when he severed off a good portion of two fingers and parts of two others when his right hand got hung up in a piece of machinery. A post-accident infection eventually made it even worse. Since Shaver was a right paw, it made him virtually worthless as a general laborer, and so he turned to music as a living.

According to Waylon Jennings, Shaver has a sense of humor about his missing digits.

“He was sitting on a bed one time playing guitar,” Waylon recalls. “And a guy who worked for me came in and said, ‘Billy Joe, if you don’t mind me asking, what happened to your fingers?’ Billy started glancing around and digging in his pocket. ‘Damn,’ he said. ‘They were here just a while ago.'”

3. Hitchhiking to Los Angeles … and ending up in Nashville.

When Billy Joe Shaver decided to give country music a serious go, he got advice from old friend Willie Nelson to head out to Nashville. But Billy Joe Shaver didn’t listen, and instead decided to point his nose towards Los Angeles. Not having a car, and without any money for a bus, Billy Joe stood on the side of Interstate 10 in Texas, waiting for someone westward bound to pick him up. And he waited, and waited, and nobody stopped. Eventually Shaver got so frustrated, he switched over to the other side of the highway heading east. The first car that passed him stopped, picked him up, and took Shaver all the way to Memphis, TN. He then made his way to Nashville, where he soon had a job writing songs for $50 a week. The rest is history.

The experience was later recalled in part in the Billy Joe Shaver song, “Ride Me Down Easy”.

4. Threatening to Kick Waylon’s Ass If He Didn’t Record His Songs

Waylon Jennings decided to record an entire album of Billy Joe Shaver songs in 1973 called Honky Tonk Heroes, and that was the turning point in both men’s career. Waylon was finally flexing his creative freedom, and Billy Joe would forever be on the country music map. But it didn’t happen pretty. Bobby Bare introduced Shaver to Waylon and after Waylon heard “Ride Me Down Easy,” he fell in love with Shaver’s music and first floated the idea of recording an entire album of his songs. Later at the Dripping Springs Reunion in Texas, Waylon heard “Willie & The Wandering Gypsy,” and loved that one too. But for one reason or another, Billy Joe was always one step behind Waylon, even though Waylon insisted he loved Billy Joe’s songs and wanted to record them, it was beginning to look like it was never going to happen. At one point Billy Joe Shaver began to bug Waylon so bad, he reportedly offered Billy Joe $100 just to leave him alone.

“…I was always in a meeting or on another call or ‘not in.'” Waylon recalls. “This went on for months….He caught me one night at RCA recording. ‘I got these songs,’ he said, ‘and if you don’t listen to them, I’m going to kick your ass right here in front of everybody.”

“He could have been killed there and then by some of my friends lining the walls,” Waylon continues. “But I took Billy Joe in a back room and said, ‘Hoss, you don’t do things like that. I’m going to listen to one song, and if it ain’t no good, I’m telling you goodbye. We ain’t never going to talk again.’ Billy played me ‘Old Five and Dimers,’ and then kept on going. He had a whole sackful of songs, and by the time he ran out of breath, I wanted to record all of them.”

5. Being The Father of Eddie Shaver

The name may not ring a bell to you right off the bat, but for those familiar know that Billy Joe Shaver’s son was one of the best country music shredders to ever fill the spot. Aside from being his father’s right hand man for many years, Eddie Shaver studied under Dickey Betts of The Allman Brothers, played with Willie Nelson, Waylon Jennings, Kris Kristofferson, Guy Clark, The Eagles, and was Dwight Yoakam’s guitar player for the first two years.

It’s only because of Eddie’s untimely death that he’s not better known. He was scheduled to release his first solo album in 2001 when he died of a heroin overdose on New Years Eve of 2000. Though Billy Joe Shaver is known most for his songwriting, and Eddie as a guitar slinger, it only takes a glimpse at either to see that the musical talent runs very deep with the Shaver clan.

6. Surviving the Death of His Mother, Wife, and Son In a Very Short Period

Shaver has been tested many times in his life and suffered through some rough patches, but few have suffered through what shaver did near the turn of the Century. In 1999, Billy Joe Shaver lost both his mother, Victory, and his wife, Brenda, to Cancer. The next year is when his son, guitar player, and right hand man Eddie Shaver died of a heroin overdose. It was a very dark period for Shaver, and it became even darker when he was performing at Gruene Hall in Texas on Independence Day in 2001 and suffered a massive heart attack on stage. Shaver nearly died, and had to undergo quadruple bypass surgery.

But he soldiered on, releasing a new album called Freedom’s Child in 2002.

Shooting a man in the face could be either very badass, or not badass at all depending on how you look at it. But when you take into account Billy reportedly did it in self-defense and was so found by a jury of his peers and acquitted of all charges, it’s hard not to include the story here, especially seeing how the whole incident inspired its own famous song.

On March 31st, 2007, Billy Joe was in a saloon called Papa Joe’s in Waco, TX drinking when a man by the name of Billy Bryant Coker came up to Shaver and stirred Shaver’s drink with a knife. After some words were exchanged, Shaver decided it was time to leave, and Billy Coker followed. Out in the parking lot, Billy Joe Shaver was overheard asking Coker, “Where do you want it?” while brandishing a small handgun. Shaver later testified in court he actually said, “Why do you want to do this?” to Coker, but either way, eventually Shaver shot Billy Coker in the face.

The news made it down to Austin where Dale Watson decided to write a song about it. “We were making jokes about what kind of song he’d write about this ’cause he writes songs about everything,” says Gloria Tambling, the owner of Papa Joe’s that’s been an I-35 landmark for around for 19 years.

Billy Coker’s wound was not life-threatening, and Shaver was arrested on April 2nd, 2007 for aggravated assault, later to be found not guilty for acting in self-defense in a trial that saw Willie Nelson and Robert Duvall as a character witnesses. Dale Watson wrote “Where Do You Want It?”, but Whitey Morgan & The 78”²s were the first to cut it on their self-titled album with Dale’s blessing. Dale later cut it on his album El Rancho Azul. Willie Nelson also wrote a song about the incident called, “I Want My Bullet Back.”

8. Singing the Opening Theme to The Squidbillies

When Cartoon Network’s Adult Swim launched a series about anthropomorphic hillbilly squids living in the Appalachian portion of Georgia, who better to contract for the theme song than Billy Joe Shaver? The song itself is actually called “Warrior Man.”

9. Being Deemed a Hero by Willie Nelson

Long-time friend Willie Nelson has never turned his back on Billy Joe, even in his darkest hour. When Billy Joe was accused of shooting a man in Waco, Willie offered himself up as a character witness. Willie has called Billy Joe Shaver his favorite songwriter. A couple of years ago Willie offered his services up to cut a duet with Billy Joe called “Wacko from Waco.” And Willie proved his love and loyalty for his long-time friend on his 2012 comeback album on Sony called Heroes. The default title track of the album “Hero” not only features Billy Joe Shaver, but is about Billy Joe Shaver and how it seems he’s been forgotten by time.

10. Being The Most Badass Country Music Performers in His 70’s

At 74, with a replaced knee, bum shoulder, and quadruple bypass, Billy Joe Shaver comes out kicking, punching, gesticulating like crazy, putting on one of the best, most-energetic country music shows from a performer of any age. It isn’t one of those shows with a solitary spotlight shone on a stool at stage center, it is full tilt country rock, rowdy and rambunctious, fueled by one of the best young bands you will find backing up a legend.