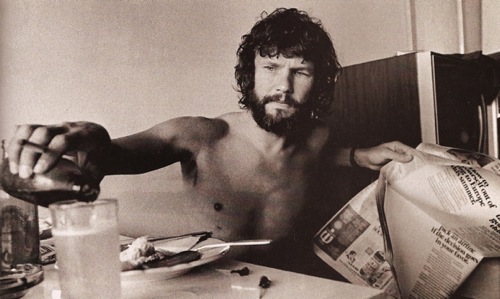 Kris Kristofferson may have never shot anyone or spent time in prison, but when you look at his life and accomplishments, it is an absolute marvel of the American experience. From starting off as a Rhodes Scholar, to becoming a helicopter pilot in the Army, to being responsible for a Hall of Fame career in country, to becoming a Hollywood superstar and dating singers and actors to making daring moves to further his career, Kris Kristofferson is not just a country music badass, he’s one of the most badass Americans to ever be born.

Kris Kristofferson is a smart one to say the least. The Rhodes Scholarship is an Oxford University postgraduate distinction that is considered the world’s most prestigious academic scholarship and scholastic accolade. Created in 1902, and the first international scholarship program of its kind, Rhodes Scholars are considered to have any job available to them throughout their lives, and many have gone on to be Presidents, Prime Ministers, and prominent business leaders. Only about 80 scholars are selected each year from around the world, and Kris Kristofferson was one of them to be bestowed with the Rhodes Scholar honor in 1958. While at Oxford, Kristofferson studied literature at Merton College—the same college J.R.R. Tolkien was a professor at during the period. Kristofferson also earned his “Blue” in boxing as a collegiate athlete.

It was at Oxford that Kristofferson first tried his hand in the music business. He recorded for a label called Top Rank Records under the name Kris Carson, and was dubbed the “Yank at Oxford”. But the pursuit didn’t go anywhere after a record company in the United States claimed they owned Kristofferson’s rights.

2. Flying Helicopters as a Captain in the Army 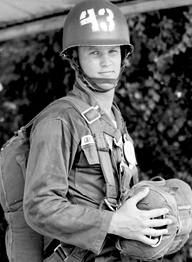 Possibly country music’s most well-known veteran, Kris Kristofferson came from a strong military family. After college at Oxford, his parents pushed him to enlist and Kristofferson went into the United States Army as an officer, attending Ranger school and achieving the rank of Captain as a helicopter pilot. Kristofferson received his training at Fort Rucker, Alabama before being deployed to West Germany as part of the 8th Infantry Division. After serving out his tour of duty, Kristofferson was scheduled to become an English Literature professor at West Point, but decided to pursue a career in songwriting instead. The American Veterans Awards named Kris Kristofferson “Veteran of the Year” in 2003. His first successful songwriting hit was called “Viet Nam Blues” originally recorded by Dave Dudley.

Kristofferson later flew helicopters commercially, especially in Louisiana, traveling back to Nashville to pitch songs. He wrote “Help Me Make It Through The Night” on an oil platform in the gulf, and “Me & Bobby McGee” also while in Louisiana.

3. Taking a Janitor Position to Help Become a Songwriter

Being from a proud military family, Kris Kristofferson was not only expected to do his duty to his country during his youth, but to follow a military career throughout his life. Flying helicopters and spending five years in the military apparently wasn’t enough, and when Kris relayed his plans to move to Nashville and become a songwriter, Kristofferson’s family officially disowned him. They never completely reconciled.

Cut off from his support network, Kris Kristofferson struggled. This Rhodes Scholar and Oxford graduate that could fly helicopters resorted to taking a janitorial position at the studios of Columbia Records simply to be one step closer to his dream of becoming a songwriter. Kristofferson was in the studio when Bob Dylan was cutting his album Blonde on Blonde, but was too bashful to approach him. He did get the courage to befriend Johnny Cash, who was warm to Kristofferson and considered some of his songs, but never took the young songwriter seriously until….

4. Landing a Helicopter on Johnny Cash’s Lawn to Deliver Demos 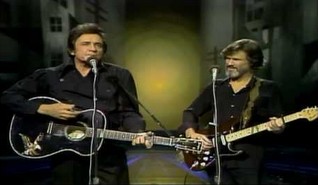 Kristofferson took part-time work with the National Guard to help pay bills, and desperate to get Johnny Cash’s attention, decided to deviate from his flight plan while on a training run and land his helicopter in the Hendersonville property’s front yard. What happened next depends on who you ask. According to Cash, Kristofferson came sauntering out of the helicopter with a beer in one hand, and his demo tapes in another, demanding to be heard. But Kristofferson paints a more subdued picture. “Y’know, John had a very creative imagination,” Kristofferson recalled. “I’ve never flown with a beer in my life. Believe me, you need two hands to fly those things.” In fact Kristofferson doesn’t even remember Cash being at the house at the time, though he does say, “I still think I was lucky he didn’t shoot me that day!”

What was the result of Kris Kristofferson’s aeronautical attention grab? It got Johnny Cash to invite him up on stage at the Newport Folk Festival later that year, which put Kris Kristofferson on the country music map.

There are songs that are hits, and then there are songs that change the whole course of music. “Sunday Morning Coming Down” was one of those songs, and it cemented Kris Kristofferson’s place in history. Simply about the lonliness of a Sunday morning when you have no friends or family and the bars don’t open until 1 PM, the song touched a nerve and in a poetic way country music had never done before.

Ray Stevens was the first to cut the song in 1969, but it stalled at #55 on the charts. Kristofferson’s own version didn’t chart at all. It was Johnny Cash’s take on “Sunday Morning Coming Down” that took it all the way to #1 in 1970, and eventually to becoming the Song of the Year by the Country Music Association. Johnny Cash had the credibility and undying loyalty of the country music community to sing what was a controversial song at the time, and have people listen through the controversy to the heart of the story that Kristoffersoon had so eloquently captured.

Where Kris Kristofferson played a seminal role in the history of country music, and specifically in the Outlaw movement of the early 70’s was by opening up the music to new themes that previously had been considered risque in the family friendly environment of country. Though country had contained risque and adult themes previously, the Countrypolitan movement taking over Nashville at the time looked to appeal to the opposite crowd of the counterculture, and anything suggestive was regularly written out of country songs, if they even got cut at all when they including something thought to be objectionable.

It wasn’t just the “stoned” word in the song “Sunday Morning Coming Down” that Johnny Cash helped Kristofferson normalize in country music when Cash performed the song on his The Johnny Cash Show. Other suggestive lyrics like “Lay your warm and tender body close to mine” from the song “For The Good Times” stretched the boundaries of country music, and allowed other songwriters and performers to tackle subjects previously off limits. 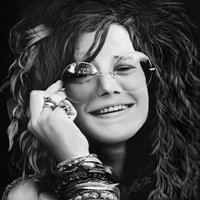 We all know Janis was the one to make Kris Kristofferson’s “Me & Bobby McGee” into an American standard, but their relationship went much deeper than songwriter and performer. Before Kristofferson fell in love with Rita Coolidge, and right before Janis would eventually die of a heroin overdose, the two Texas natives engaged in a wild relationship with “Me & Bobby McGee” as the backdrop.

Kris and Janis were introduced by songwriter and performer Bobby Neuwirth. Kristofferson had just played in Greenwich Village, and Neuwirth suggested they fly out to Larkspur, California where Janis was currently staying. The three ended up residing there for weeks, and Kristofferson immediately became the apple of Joplin’s eye. “I’d a split there,” Kris recalls. “I dug her, but I had itchy feet. I’d get up intending to get out, and in she comes with the early morning drinks and pretty soon you’re wasted enough and you don’t care about leaving. She’d definitely let ya know when she was being abused, and she thought so a lot. She was always jangling around talking about how everybody was living off of her, but she had people she’d bring into the house and then she’d bitch because she was giving them bed and board.”

It was 1970, and Kristofferson was finally beginning to make it as a songwriter. He wanted Joplin to cut “Me & Bobby McGee” to help pay bills, but sources close to the steamy couple insist Kristofferson didn’t shack up with Janis simply to convince her to record the song. Joplin truly loved the song, and decided to release it on her next album, which ended up being her last. After Kristofferson left, Janis fell back into heroin use. Kristofferson tried to come to her aid, but Joplin’s demons ran much deeper than her short-term relationship with Kris. “You won’t be around,” Janis retorted to Kris. “None of ’em will be.” 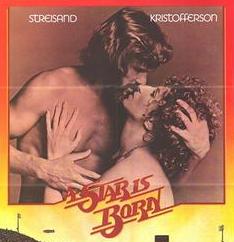 There are a lot of actors who have become musicians, and musicians who have become actors. But few have excelled at both disciplines to the point where they’re awarded some of the highest distinctions the respective industries can bestow. Already a decorated Captain in the Army, already a Rhodes Scholar, already a winner for the CMA’s Song of the Year, Kristofferson gets into acting, and eventually is given the Golden Globe of Best Actor to put on his mantle.

Kristofferson’s acting credits are too numerous to list, and depending on who you talk to, they rival if not exceed his musical contributions. But in 1976, Kristofferson delivered the performance of his lifetime across from Barbara Streisand in A Star Is Born. Though the film was a remake and had been released two times previous, it became a blockbuster and made $80 million, partly from the savvy casting right as Kristofferson was coming into his prime as a Hollywood heartthrob. The movie sent his hunk status into hyperdrive, and Kris became ‘A’ list material. The film also won four other Golden Globes, and an Academy Award.

Kristofferson loved receiving the distinction, but he hated making the movie. He later expressed it was “worse than boot camp.”

Overall Kris Kristofferson has acted in over 100 films.

9. Playing The Very Top Mob Boss in the Movie Payback 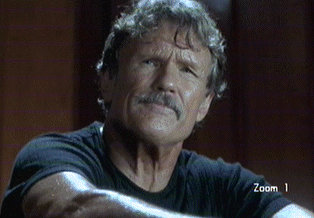 In the 1999 movie Payback starring Mel Gibson, Mel’s character Porter is looking to get the $70,000 owed to him after an underling of a criminal syndicate does him wrong in a deal. As the movie transpires, Mel keeps killing off underlings and bosses in the syndicate, working higher hand higher up the chain looking for his payback. “One man. You go high enough, you always come to one man,” Porter keeps saying throughout the movie. Eventually Porter does get to the very top, and who does he find? None other than Kris Kristofferson, playing the role of Bronson, the very top mob boss.

What makes the role work and the scene where the top boss is finally revealed so powerful is because of the weight that the simple sight of Kris Kristofferson holds.

Just think about that. When you talk about imitation as the sincerest form of flattery, it doesn’t get any more flattering than that. Some of the most notable artists that have covered Kris Kristofferson songs include:

“The great thing about being a songwriter is you can hear your baby interpreted by so many people that have creative talents vocally that I don’t have,” Kris once said.