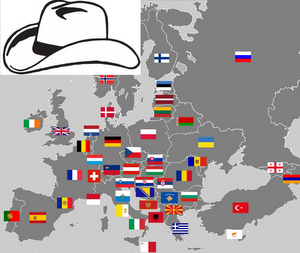 You talk to most any independent country, roots, or Americana artist, and to a man they will tell you their fortunes tend to be better in the European market. Whether it is because the competition is less, or the support for the arts in general is more, European tours are what allow many of your favorite artists to make it in the music business. With so many European tours and the continued spread of American country music, it was only a matter of time before country began to rub off on the locals and American roots music spread like wildfire throughout the Old World.

This is in no way a complete list or compendium of the dozens upon dozens of country and roots artists and bands that call Europe home. It’s simply a cross section of some cool examples of how Europeans from many different countries, and in many different disciplines from traditional country to bluegrass have taken up the country cause. You’re encouraged to leave your own lists and examples below.

If you’ve been wondering whatever happened to the classic, beautiful sound of the country music duet, look no further than the UK’s My Darling Clementine. Spellbinding voices mixed with a 50’s-60’s golden era styling make this English pairing something the whole world can enjoy.

You may chuckle at the name, but G-runs ‘n Roses from the Czech Republic are an energetic, high-octane bluegrass band that can bring the roots as deep as any of their transcontinental counterparts. Language and cultural barriers be damned, once they launch into song, you might as well be in Kentucky.

Maybe the most commercially-successful band on this list, this pair of Swedish sisters offer succulent harmonies and stellar songwriting in music that is inspired heavily from the Gram Parsons/Emmylou Harris camp. Born into a house where folk and country was ever-present, and not hindered whatsoever by barriers of language or culture, the only thing giving these girls away as not being from the US is their lack of pretentiousness. First Aid Kit gives many American singing duos a run for their money.

A super fun band from the UK featuring guitar player Russ Williams sandwiched between two hot girls in Wild Lucy Williams slapping on double bass and Nicole Terry on a sweet, smokin’ fidddle. The Rip Roaring Success have a distinct, stripped-down Western-swing style that’s hard to not start moving to when they get going.

One of the most unique performers you will ever see or hear, Dad Horse Experience from Germany is a banjo-playing one man band accompanying himself on bass organ with his feet and sometimes sporting a kazoo. His songs serenade a bereft world with cautionary wisdom, while the music is not afraid to work in fun and whimsy.

From Celtic jigs and folksy tales, to the legacy of the American storytelling song and Southern anthems,  UK’s Rattleshack traces a nexus between English-speaking country and folk music, and marks a guidepost for the listener to see how the roots of the music all intertwine and share the same origin. It’s not that this hasn’t been done before, but it’s not been done nearly enough, and never with the fun, underground country twist Rattleshack displays.

Possibly the pinnacle of new-school punk-infused bluegrass from Europe, the Dinosaur Truckers can be as fast and precise as any, regardless of continent. But music is not a skills competition, and the best part about this band is that they know how to slow it down and make it about the song as well. Their recent, self-titled album was awarded a full two gun up review by Saving Country Music.

One of Europe’s oldest country bands originally formed in 1999, Crooks & Straights from Rijeka, Croatia might be the most straightforward country, honky tonk style band on this list. Known for excellent musicianship and players, aside from a slight Croatian accent to the lyrics, you would never know this band didn’t originate in North America.

From the underground/hellbilly side of country, Henrich Steuernagel from Wölfersheim, Germany brings a hellish take to country and bluegrass in self-penned songs. Germany is one of the epicenters for underground country in Europe, and Heinrich is also known for being an ambassador/tour guide/liasion for American bands touring through locally.

Maybe one of the most familiar bands stateside since they have been based in the US for many years, the Swiss-born Kruger Brothers consisting of brothers Jens, Uwe, and Joel are considered one of the top folk and bluegrass trios in the entire discipline. They have released a total of 16 albums, and banjo player Jens Kruger just won the Steve Martin Prize for Excellence in Banjo and Bluegrass Music.