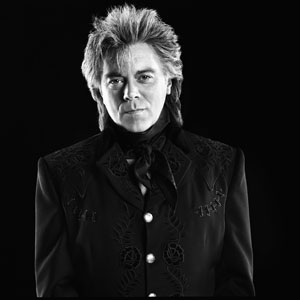 If anybody asked me point blank, who is the artist that is most saving country music right now? I would answer without hesitation, “Marty Stuart.”

Marty Stuart is the man. More so than any other modern country music artist, Marty does everything right, from preserving the roots of country and helping to keep the traditions alive, to putting out fresh, fun, and relevant music, to taking up the cause of the oldtimers and the up-and-comers alike to keep the country music community both honorable and vibrant. You name it, Marty has done it, and done it many times away from the cameras and country writers, simply from a passion for country music, and from the kindness of his heart.

Marty Stuart breathes country music, and helps preserve it and pay it forward almost as if it was an involuntary action. He doesn’t know how to do anything different. The man is tireless, touring many months out of the year, and spending the majority of his time when home in Nashville on his Marty Stuart Show or playing the Grand Ole Opry, or other endeavors that many times seem to be about promotion someone other than himself. The amount of talent he has churning through the Marty Stuart Show set alone is boggling, and it is about the only place left in American popular media where you can see what real country entertainment once was.

You know, I’ve heard some folks say that Marty is “hokey,” probably partly in response to his RFD-TV Show. I’ve heard others remark that he’s just plain weird, maybe from his flamboyant hairdo or dress. What’s funny though is when it comes to Marty Stuart’s music, all of that stuff seems so superfluous. His recent output is responsible for some of the hardest-charging guitar music that exists in country right now, walking right up near the line of rock & roll, but cleverly knowing where not to cross it. The magic Marty is making with “Cousin” Kenny Vaughan and the double-barreled Telecaster twang-out sound is something that will go down in the annals of country music as one of its coolest eras.

Marty Stuart also has excellent ballads and beautiful instrumentals and traditionals that include some of the tightest musicianship and harmonies you will find, mostly the fault of his excellent band The Fabulous Superlatives. From gospel to Outlaw, Marty Stuart can work within all of country music’s colors, and practice the art of playing and living authentic country music that he preaches. As Marty says, “The most Outlaw thing you can do in Nashville right now is play country music.”

One thing that many folks don’t know about Marty Stuart is that he owns a vast archive of country music memorabilia, and not from a personal desire to horde expensive valuables, but a sincere desire to preserve these artifacts for future generations of country fandom.

I’ve heard many stories about Marty’s generosity from other artists over the years, but the one that sticks with me most was from 90-year-old Don Maddox, the last surviving member of the Maddox Brothers & Rose. When Don flew out from the West Coast to be a part of the opening of the Bakersfield Sound exhibit at the Country Music Hall of Fame, Marty acted as Don Maddox’s personal tour guide in Nashville, taking him to see the Maddox Brothers costumes Marty gobbled up years ago for safe keeping (some of which were given to the Hall of Fame for the Bakersfield exhibit), inviting Don to play with him on The Grand Ole Opry, and putting him on The Marty Stuart Show.

Marty’s generosity stretches out to all sectors of real country music, to up-and-coming acts like The Quebe Sisters and Justin Townes Earle that he’s invited on his TV show, to Hank Williams III who appears on a duet on Marty’s latest album Nashville Vol. 1 – Tear The Woodpile Down.

And in the end, Marty Stuart’s music is the reason he deserves this honor the most. The reason Marty is in a position to do all the great things that he does is because he is so revered by his peers, by country music’s historic institutions, and by the overall country music community.