6 Singing Duos Who Could Replace The Civil Wars 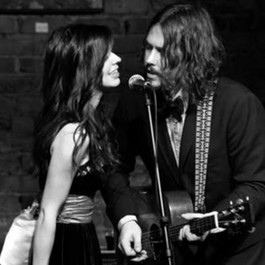 Whether you love The Civil Wars (who just announced they’re officially kaput), or you found their vocal acrobatics a little too fey, it was hard to not root for the singing duo when they showed up in the nominations for country music’s major award shows. They were the one act with more of an Americana, substantive approach that you could get excited for. Sure, their “Steve Vai of Vocalists” approach and hot-burning sets sung virtually the entire time with the duo staring into each other’s eyes seemed doomed as an unsustainable approach from the beginning, but it was fun for many while it lasted.

So who could step up of in the country music vocal duo space who could duel with the heavyweights of the mainstream, and offer more substance to that category like The Civil Wars did? Of course there will only be one Civil Wars and nobody will be able to replace them completely, but here are some ideas who could have a similar impact.

If there was ever a duo that was poised for a big push into the mainstream of county, and whose songs would immediately deliver an entirely new paradigm of substance and roots to the genre without compromising melodic sensibilities, it would be the Swedish sister duo of Johanna and Klara Söderberg. Their songs are screaming for more radio play and a wider American audience, and they are supported by stellar video releases and a major American label in Columbia Records. First Aid Kit could not only deliver country music the critical entree in the duo category it craves, they could also deliver country some much needed girl power. Like the Kacey Musgraves of singing duos, but without some of the political baggage and sedated performances that have somewhat saddled Kacey, First Aid Kit could become a big player in the space vacated by The Civil Wars. Of course the duo would have to commit more deeply to the North American market, but their potential as a commercial and critical powerhouse is definitely there, and their new album Stay Gold is the ideal springboard.

As dubbed by Saving Country Music, Shovels & Rope is “The Civil Wars for the rest of us.” Where The Civil Wars seemed somewhat saddled by the eloquence and sentimentality, Shovels & Rope is rough, dirty, sweaty, ugly, and real. At the same time, they deliver the same heated passion in their music that made The Civil Wars so compelling, and unlike The Civil Wars, that passion isn’t pretend because Shovels & Rope are also true life partners. Though they probably don’t have the same widespread commercial potential as a project like First Aid Kit or The Civil Wars did, their strong grass roots network across the United States gives them a deep base to work from. At some point this Americana powerhouse graduating to the mainstream could do wonders for both spheres of roots music, and with their new album Swimmin’ Time scheduled to come out August 25th, this could be the moment Shovels & Rope step up their game from their already quick-won success.

Just like First Aid Kit, everything is in place for this singing sister duo to step it up to the next level. Unlike many of the other duo acts currently residing in the Americana realm, The Secret Sisters enjoy the support of a major label in Universal Republic, and have found quite a bit of success under the auspices of super producer T Bone Burnett who worked with The Civil Wars in their collaboration with Taylor Swift. The Secret Sisters have the songs, and the spice that it takes to take a duo to the top levels, combining authentic country roots with contemporary styling that could reach and resonate with a wide audience if only given a chance. All that is needed for The Secret Sisters to explode is a deeper commitment from the industry. In the vacuum left by The Civil Wars, this could be the duo’s chance.

The intimacy of The Civil Wars, and their ability to do so much with simply two voices and a guitar is what made them captivating to a wider audience than what regularly would transpire from such a stripped-down production. This is also the allure of The Milk Carton Kids, who like Shovels & Rope, have seen a meteoric rise in the Americana ranks. Kenneth Pattengale and Joey Ryan may be a little too strange, a little too eepish for the wide ear compared to some of the other Civil Wars alternatives, but they certainly capture the vibe that made The Everly Brothers, Simon & Garfunkel, and the Gillian Welch & Dave Rawlings pairings a success that stretched into the sphere of mainstream acceptance. They also enjoy the support of ANTI records—one of the strongest of the independent labels.

Potentially the singing duo with the most upside potential because they’re still so young, sisters Sarah and Savannah Church from the coal mining region of Dickerson County, Virginia bring some of the most exquisite harmonies to their love for traditional country and gospel music. The fraternal twins have been making big waves in the traditional country, Gospel, and bluegrass circuits, and they certainly have the talent to take them to higher places in the future. Since their still somewhat in their developmental phase, the question of The Church Sisters is if they will develop a more original style or stick with standards, and if they will have enough secular material in their mostly religious music lineup to create the type of widespread acceptance they would need to take it to the next level. Either way, The Church Sisters will surely be making new fans across the country as long as they keep singing.

Maybe not with the commercial potential of the rest of the field because of their fairly traditional bent, The Cactus Blossoms from Minnesota are nonetheless one of the most engaging and enjoyable vocal duos out there that deserve to discover a wider audience and greater success. Page Burkum and Jack Torrey have definitely tapped into that Louvin Brothers / Everly Brothers mojo with the ultra-tight harmonies and ear for styling that can send shivers down the back of your neck. The unsigned duo is certainly worthy of a wider ear.

Kelly Willis & Bruce Robison and their “Bruce & Kelly Show” is another interesting candidate for  The Civil Wars replacement. The husband and wife duo might be a more established duo like Gillian Welch and Dave Rawlings, but performing together specifically is a more recent incarnation for the Texas music royalty couple. With the backing of the strong base of Texas country listeners and a renewed spirit, Kellie & Bruce can do what The Civil Wars did, and then some.

Mandolin Orange and Carolina Story are other promising Americana duo.

The Urban Pioneers would be the underground roots entry into the singing duo that has the legitimacy of also being a real life couple. Cut from the cloth of Jayke Orvis’s now dissolved Broken Band, it will be enjoyable to watch how this duo develops.